10 Best Creation Of Adam Tattoo Ideas You’ll Have To See To Believe! 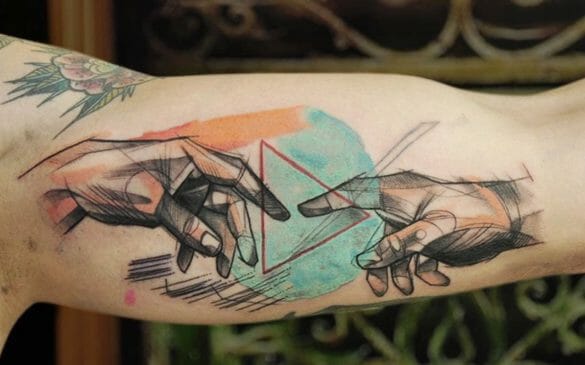 The painting Creation of Adam is a masterpiece created by Michelangelo.

The great artist, sculptor Michelangelo doesn’t need any added introduction. Each of his art and each masterpiece speak for him.

The Creation of Adam tattoo meaning can be deciphered if you are familiar with renaissance art. If you look into the artwork in detail you will see the fingers of God and Adam are not in touch. This means the picture is of the moment right before God gives life to Adam. The picture holds that tension of the moment. Another is that Adam is holding out his arm the same way God is, which indicates that God created humankind in his own image. Raed on to know more about what tattoo designs of this masterpiece you can get.

Michelangelo created one masterpiece after another, both in form of paintings and sculptures. The Creation of Adam is one of the many greats he created. Getting a Creation of Adam tattoo design as a tribute to the great sculptor, his works can be perfect. It also helps you show off your love for his beautiful works of art.

You can get a simple Creation of Adam tattoo design or get inked with a unique design by including a picture of another masterpiece of Michelangelo, such as The David in a unique way, like the picture above.

Art, tattoo, everything looks good when each detail is in there. Michelangelo was an incredible artist, so tattooing a realistic Creation of Adam tattoo design can be extremely hard for any tattoo artist, but it will also be worth it. With the effort of the tattoo artist and the beauty of the art everything becomes prominent with realistic tattoo ideas that contain each detail of the artwork.

The picture above is a realistic tattoo of just the Creation of Adam hands tattoo. The detailed artwork on the hands is surely remarkable. You can get the entire Adam and God painting as well for your next new tattoo.

Sometimes the simple things can turn out to be the best. Just like minimalistic tattoos. Simple minimalistic outline tattoos hold all the meaning and symbolism of the design you choose and also stay as beautiful works of art. These tattoos are usually the best for people going to ink for the first time, or people who don’t want to ink a large part of their body.

The picture above shows a beautiful yet small minimalistic outline tattoo of just the hands from the Creation of Adam painting. Take inspiration and change the design to your heart’s content for your unique personal design.

The Creation of Adam tells the story of God imbuing Adam with life, soul. It tells the story of creating Adam and thus, creating mankind. Hence, it’s quite natural that this would be a good idea for a tattoo for people of faith and religious people. Love for art and the Almighty both will be expressed through the tattoo.

You can get a tattoo of just the Creation of Adam. You can also add a few more elements, such as dove birds to the design to make the religious symbolism more prominent, like the picture above.

The Creation of Adam is a work of art itself, made by one of the greatest artists, Michelangelo. However, the fun part can be modifying that piece of art according to your choice for your tattoo. Especially introducing some trendy, popular tattoo styles or modern art forms into the design, like abstract tattoo style or geometric patterns.

The picture above is of a gorgeous chest tattoo of the hands from the Creation of Adam. The hands are made up of geometric patterns and the tattoo itself is on a watercolour background.

Creation Of Adam With Paw Tattoo

There are many versions of the Creation of Adam tattoo design people choose to get. One such version that you can see very frequently is where, in the place of the hands of God or Adam, people replace it with a paw of their pets. This is done mainly as a unique design to express the wearer’s love for their pets. The tattoos surely look adorable as well.

The picture above shows a Creation of Adam tattoo with the hands of a human and a cat instead of the hands of God and Adam’s hands. You can include a dog’s paw if you have a dog.

A popular version of the Creation of Adam tattoo you can see is instead of God touching Adam, you can see human and robot hands there. Its inner meaning is that the way God created Adam and gave him life, many people are doing the same with robots. We, the humans are the creators of robots and are giving them lives.

You can get a Creation of Adam tattoo where you swap out Adam’s arm with a robot arm. You can also add some more scientific elements to the tattoo, such as the Fibonacci spiral to make the symbolism stand out more, like the picture above.

Creation Of Adam With Universe Tattoo

The Creation of Adam tattoo with a background of the galaxy, or universe is another version of the tattoo you will see is pretty common among people. The inner meaning of this design is that, just like God created Adam, God also created the Universe. People want to show the creation of the universe along with the Creation of Adam by including a few elements of space in their tattoo designs.

The picture above is of a slightly detailed Adam of Creation tattoo with a few planets, stars thrown in the design to make it look like space. An awesome shading work has been done here and there in the tattoo.

The words, ‘Memento Mori’ have a tragic history based in ancient Rome, where sleeves kept telling themselves this word to stay sane. The Latin words mean ‘Remember that you must die.’ The Creation of Adam tells the story of starting off life and Memento Mori reminds us of its end. That’s why many people chose to combine the two to tell the story of mortality.

The picture above shows a Creation of Adam tattoo with one hand of a human, while the other of a skeleton. It certainly expresses the cycle of life through this simple design.

No one is born as pure good or pure evil. There are always two sides to a single coin. God created humans that way. The concept speaks the truth, so many people choose to express this concept through their Creation of Adam tattoo. They choose white or no colour to indicate good and black to indicate evil.

Now you can get inked with whichever awesome tattoo design of the painting you like. The tattoos look beautiful on the chest, back, lower back, arm, leg, and everywhere else. We still have a few more suggestions for the enthusiast of all arts in you –

Get inked with your favourite Creation of Adam tattoo design.