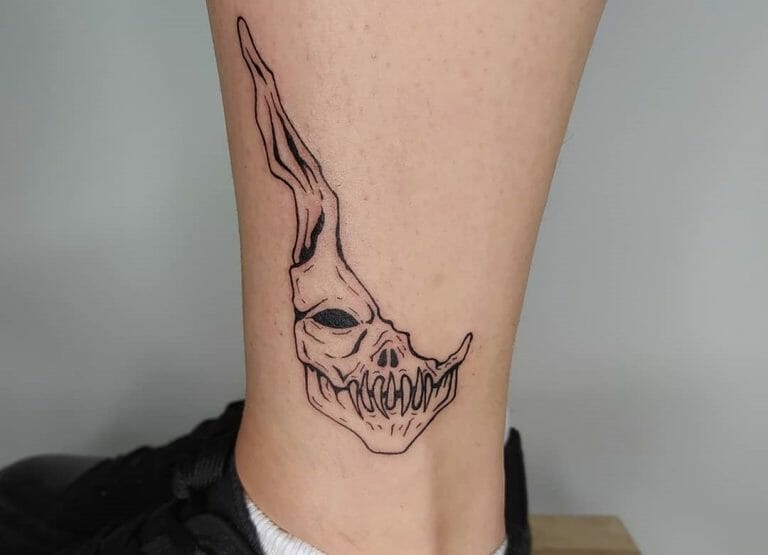 Are you a fan of the famous YouTuber Corpse Husband and want to take your zeal to the next level? Check out these amazing Corpse Husband new tattoo designs.

Corpse Husband is a famous Youtubers who has gained a lot of popularity in the last 2 to 3 years.

He has received a wave of appreciation from not only his new fans but also his old fans. He has scored millions of views on his latest content.

Corpse Husband started his YouTube channel in 2015. Initially, he focused on narrating horror and spooky stories online. Because of his mesmerizingly deep voice, he received appreciation. Technically, he has not yet revealed his face to the world. They only know him by his voice. He has a huge fan base and every one of his fans is passionate about his videos. His fandom is even considered more than BTS. One fan decided to take his support of Corpse Husband to another level after Corpse revealed a strand of his hair on his social media platform, Instagram by getting that strand of hair tattooed on herself. The curiosity amongst his fans about the real identity of Corpse Husband has become unimaginable. They are very inquisitive to know who the person behind that appealing voice is. Corpse Husband has played with this curiosity of his fans by miniscule reveals on Instagram. Initially, he revealed only his hands. Then he revealed a single strand of hair. The bizarrely atmospheric black and white image of his hair strand have more than 5,60,000 likes. He has become an internet celebrity without even revealing his true self.

If you are a fan of the star, a great way to honor him is by dedicating a tattoo. We have curated a list of amazing Corpse Husband tattoo designs that are right up your alley. Pick out your favorite artwork and chose your next tattoo!

Corpse Husband saw a rise in his popularity after he streamed an Among Us game with other YouTube stars like PewDiePie and Valkyrae. He receives millions of news on every video that he uploads. His fan base is crazy about him. After reaching a certain amount of likes and subscribers, he posted an onlyhands picture on Instagram. And after hitting one million Instagram followers, he posted an onlystrands picture calling it a crowning achievement.

This particular tattoo is the character or the imagination of the musician and YouTube Corpse Husband. There are a lot of different elements in this design. The artist has used fine lines, and strokes of black ink to make the borders. Colors like bright red and purple have been used to fill in the design. In some areas, solid black ink has been used. White ink has been used to highlight certain portions. This design is beautiful and would be the perfect choice if you want to pay tribute to Corpse Husband.

This tattoo design is a solid mixture between Corpse Husband and E-Girl. According to one of the pictures on social media, Corpse was listening to ‘E-girls are ruining my life’, a song by him and Savage Ga$p. This song gained a lot of popularity since its release, so much so that people have its cover as well as its lyrics tattooed on themselves.

This particular tattoo shows a portrait of an E-girl made with thin strokes of black ink. The detailing and intricate lines of this design make it more appealing. If you want, you can add bright colors to the tattoo and make it look like a realistic painting. This is a beautiful design and a great way to honor the social media star.

Even though he is a huge social media star corpse’s husband has managed to maintain his privacy. He has not yet revealed his face to the world, even though he runs his YouTube channel for the last 5 years. On certain achievements, which he calls crowning achievements, he has released certain parts of his body, like his hand for a strand of hair. In one such picture, he revealed a demonic mask. Fans loved it so much that they started using this mask as a part of his identity. This particular tattoo is off the mask and there is a barbed wire in the shape of a heart around it. The word ‘Corpse’ has been written inside the heart. The entire tattoo has been made with thin strokes of black ink and some shading of grey and black has been done within the design.

This tattoo was made in honor of this song made by Machine Gun Kelly and Corpse husband together called ‘DAYWALKER’. The song had the lyrics ‘I pray to God, and then I went to sleep with bloody hands.’ This song was released in 2021 and it gained instant popularity by scoring views in millions. The genre of the song was Hip-Hop and Rap.

This particular design shows 2 hands holding together and blood running through them. The tattoo artist used fine line work and solid black ink to make the border of the hand. He then used black color to fill in the blood. To give it more effect, added two drops of blood falling from the hand.

This beautiful artwork is another way to pay tribute to Machine Gun Kelly and Corpse Husband for their song ‘DAYWALKER’. The popularity of this song is such that people started using certain lyrics of the sound to make tattoos on themselves. This design is one such tribute. The portrait of the person on the right is of Machine Gun Kelly and on left is Corpse Husband. The tattoo artist has done a great job with all the intricate details of this design. Find line work with solid black ink has been used to make the borders of the portrait. To film the design, the tattoo artist has used colors like black, grey, and white. Below, the 2 portraits are the lyrics of the song, ‘If I tell you a secret, will you keep it?’ written in black ink.

Another very famous song by Corpse Husband is called ‘Agoraphobic’. This song was released in 2020 and it gained a lot of popularity. Agoraphobia is generally related to a type of anxiety disorder in which a person tries to avoid places or situations that give someone fear of panic and make them feel trapped. In this song, Corpse has tried to write about his anxious state of mind. This song was loved by all his fans and made him more relatable even though he never revealed himself. This tattoo has the lyrics ‘I love it when it rains because I’m agoraphobic, CORPSE’. Some clouds have been made on top to show the rains. The entire tattoo has been made with fine strokes of black ink.

This particular design is also of Corpse Husband in his mask, making a peace sign with his hands. The tattoo artist has tried to get the detailing of this tattoo on point. So much so that even the Youngs on his finger look exactly like the ones he has in real life. The artist has used thin strokes of black ink to make the border of this design. Inside he has used colors like black, grey, white, purple, pink, and peach to fill in the portrait. A great way to honor the artist.

Corpse Squad is what some fans of corpse husband call themselves. This design is a representation of their love for the star. To show corps they have used a skull made with black, grey, and white ink. On top of the design is a big flower that represents their love for him. The flower has been made with colors like bright red, yellow, and green. In some areas, the artist has used dot work art to complete the shading within the design.

This tattoo has the word ‘Corpse’ written in a spooky font. The artist has used bold strokes of solid black ink for this design. This is a very simple way to pay tribute to the YouTube star. We know that in a contest on Twitter, Corpse Husband won from BTS by a tiny margin thus proving he is popular on every platform leaving no social media platform unscathed. His fans love him and if you are one of them, it would be a great way to pay tribute to him.

This beautiful design is a perfect testament to show how unprecedented corpse husband’s rise has been in the world of social media. Fans are so crazy about him that they also have his strands of hair tattooed on themselves. Every fan of his has his own tattoo journey. They strike mercilessly at anyone who speaks out against him. This design is of the mask that he had revealed in one of his pictures. The artist has used fine line work of solid black ink to complete this design. A simple yet effective fan tribute to Corpse Husband!

Getting a tattoo dedicated to a person or a celebrity can be a huge commitment. One day you might like the celebrity and the other day you might not. So before getting a tattoo dedicated to Corpse Husband, you should think about it carefully. Most of these tattoos are large and can take more than one sitting to complete. The cost of each tattoo depends on the design and the colors used to create that tattoo. We hope that you liked our list of corpse husband tattoos. If you are looking to explore further, you can look at –