101 Best Coraline Tattoo Ideas You’ll Have To See To Believe! 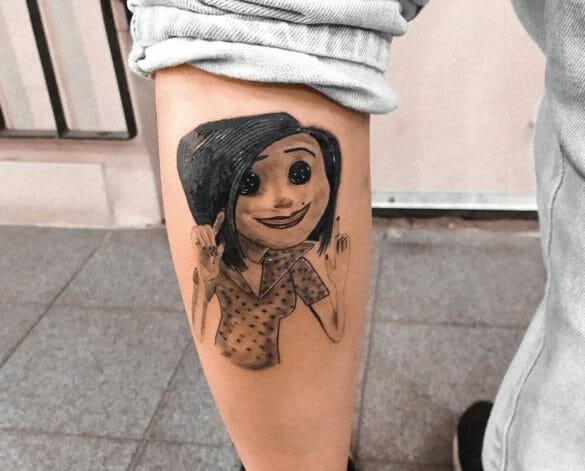 Looking to make a Coraline tattoo your own? Continue reading to find out the best Coraline tattoos, that will surely make you wanna get inked with one, instantly!

Coraline is a film adapted from a book by the same name, which was released in the year 2009, and has been popular ever since.

While for children Coraline might be an adventure story with creepy details, for an adult, Coraline is surely a whole different experience, altogether. There are many bits and pieces both in the book and the movie, which may cater more towards adults than children.

Therefore, it is really not surprising that a lot of people have been getting Coraline tattoos. If you are one of those people with whom this film or book stuck forever, then you can surely get inked with a fantastic Coraline tattoo, yourself! Continue reading to check out the different tattoo designs that you can use to create your own Coraline tattoo.

Of course, one of the first approaches for getting a Coraline tattoo would be getting a realistic one. Here, Coraline has been depicted, looking just like she looked in the film. From the colour of the hair to the colour of the clothes, everything about this tattoo is perfection. The expression on Coraline’s face will also draw attention from those around you. A highly detailed and precise tattoo of this sort will surely take time to be completed. But once it is done, you will cherish it forever and always.

In the “Other World”, which was talked about in the film and book, all the people had buttoned eyes. This tattoo is a portrayal of Coraline with buttoned eyes, as well. The most eye-catching part about this tattoo is the intricate black dotted shading. The entire tattoo is coloured with dots, which is creating a sort of gradient, giving the design a very monochromatic artistic look. Every tiny detail in this tattoo, from the buttons to the shoes have been created with exceptional attention, making this a fantastic option to get inked with.

If you love shades of blueand purple, you may surely find this Coraline tattoo to be right up your alley. In the film, the passage through which Coraline travelled to the Other World had beautiful tones of blue and purple. So, this tattoo is a perfect portrayal of that. Additionally, the circular patterns here bear resemblance to the artworks of Vincent Van Gogh. So, for art lovers and artists, this tattoo will serve a dual purpose.

Whether you have watched the film or read the book, you surely are aware that this story featured a black cat in both worlds. So, if you love cats or loved the cat in Coraline, your Coraline tattoo can have the beautiful black feline as its centrepiece. In this tattoo, as you can see, the cat has been designed with an endearing expression on its face. The large eyes are giving the tattoo an animated look, while the way in which the body of the cat has been coloured is making it look like a painting. You can get this inked on the side of your ribs, as pictured, or on your back.

A more vibrant version of the cat tattoo would be this option. Here, the cat has been made to look much bolder, due to a darker black ink being used. The bright blue eyes are popping out against the shiny black background. The more interesting part about this tattoo is the beautiful leafy motif below it, somewhat appearing to frame the cat in place. You can get this Coraline tattoo inked on your forearm.

The button is certainly one of the most common symbols for this film and book. In this tattoo, the hand of the other mother from the Other World has been portrayed, with a button in her hand. The shape of the fingers is undoubtedly giving this tattoo a very eerie look. To add to the creepiness, the colour scheme followed in this design is further making the whole tattoo a symbol of horror. This Coraline tattoo can always be a reminder of the thrilling and scary experience Coraline had to face, in order to save herself from Beldam, the mother from the Other World, and the main antagonist in the story.

Apart from the button, the key which helped Coraline enter the Other World is also a common symbol for the film. So, you can get inked with a simple tattoo like this one, featuring the key. In this tattoo, the key hardly has any intricate details. Even then, it is holding an allure of its own due to the perfect balance of the black, white, and grey shades. You may use this tattoo idea for your forearm or shoulder.

The character of Beldam, who was the evil mother in Coraline and the lead antagonist, has surely given you all the chills and creeps. So, why not get a tattoo to remember this spectacular character, forever? In this tattoo, which is covering the entire forearm, both the evil mother and Coraline are featured. The expression on Beldam’s face is perfectly capturing the sinister plans she had throughout the book and film. The tattoo also has the key at the end. You can add more symbols from the story to make this tattoo even more meaningful. A tattoo of this size and detailing will take considerable time to be completed but will be worth it in the end.

If you want a Coraline tattoo that is not like the rest, you can opt for this idea. Here, the house in which Coraline lived has been portrayed. The whole tattoo has been done in greyscale, which is amplifying the creepy factor of the tattoo. The impeccable shading which is done on the house and the floral motifs on the bottom two sides of the house are adding an aesthetic visual appeal, which is quite contradictory to the overall eerie nature of this house. You can get this tattoo inked on your back, as that would provide a large canvas.

One of the most sought-after and best tattoo designs are those which feature geometric frames. In this tattoo, as you can see, Coraline and her cat have been framed within a diamond shape. Tattoos of this kind are almost equivalent to hanging up a photo frame. This Coraline tattoo is even more special, as it is featuring a number of references to the story. You can ask your tattoo artist to recreate a coloured version of this tattoo. However, the monochromatic effect is perfectly capturing the essence of the story and the experience Coraline had.

Sketch tattoos are all the rage these days, and there is no reason to believe you cannot apply this style of tattooing to your Coraline tattoo. In this design, two versions of Coraline has been depicted. One from the real world, which has a sad expression on her face and normal eyes, and the other from the Other World which looks happy, but has button eyes. A tattoo of this kind perfectly sums up the dilemma Coraline had to face. The simplicity of the design of this Coraline tattoo is perfectly contrasting the deep meaning it is holding in reference to Coraline’s story and experience. You can use this tattoo design on the back of your leg, or on your arm.

There is no dearth of the various kinds of Coraline tattoos that you will find all around you. However, it might be difficult to pick a Coraline tattoo that you find to be relatable to you. Irrespective of whether you have read the book or watched the film, the story of Coraline is not a story you can easily forget. So, your Coraline tattoo must be unforgettable too. Here is a quick guide for you to use-