101 Best Coral Snake Tattoo Ideas That Will Blow Your Mind! 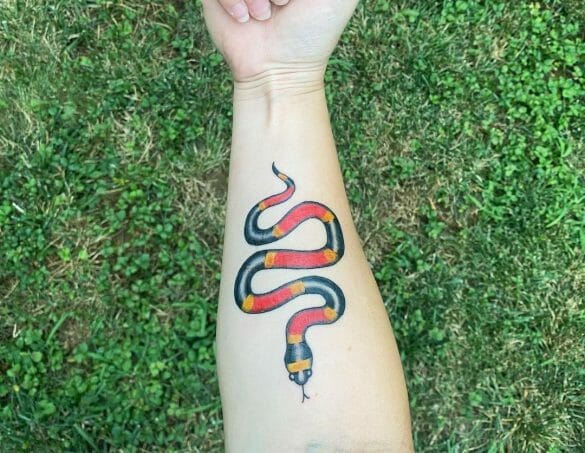 Snakes are generally connected with rebirth and transformation since they lose their skin, making them a good tattoo choice for persons who have gone through a significant life transition. Snakes are considered spiritual symbols in Hinduism and some West African traditions.

Snakes are also said to bring good luck, prosperity, and protection in a Japanese snake tattoo. A Japanese snake tattoo is a symbol known to protect against evil or bad luck. Because of the Biblical tale of Adam and Eve, Christians may connect snakes with temptation and treachery; nonetheless, the symbol of the ouroboros – a snake biting its tail – represents immortality and eternity.

This is a small snake tattoo on the arm. The snake is hissing, with it’s tongue out. The tattoo design includes a pattern of red and black bands on the body of a snake. The red bands on the snake’s skin have a black dot on them. Small snake tattoos are done quickly where even the tattoo artist tends to enjoy inking a coral print. Single snake takes the focus because of the details of the scales. Such tattoo designs have different meanings depending upon the shape as well as the color of the snake. Black tends to represent the wisdom to make a person more dignified. Whereas red is known for protection as well as strength. If you are a minimalist and want a space-filler tattoo with a positive meaning, this might be the best snake tattoo design for it.

The next tattoo is a colorful snake tattoo with beautiful scales on the snake’s body. One of the commonly known coral snake tattoos is that they represent the changing seasons. Auckland-based tattoo artists make this tattoo design. From its look, out of many snake tattoos, this one looks like a venomous snake. Dark blue ink shaded with red and yellow inks gives it an exotic look. The texture of the scales makes it look more surreal and authentic. The placement of this tattoo design is on the leg beside the kneecap. Snake leg tattoos are prevalent nowadays as getting such an animal tattooed on your skin can represent your outlook towards life.

Coral Snake Tattoo On Back

Coral snakes are one of the most venomous snakes found in North America. They can be identified due to their distinct color pattern. The most common coral snakes have brightly colored straps on their body, which also warn predators. Corals have highly potent venom and belong in the same family as Black Mambas and Cobras.

This is a back realistic snake tattoo that shows a bright coral that looks very natural, and it’s as if it’s almost climbing on the person’s back. The realism of the tattoo comes from the incredible attention to detail. The snake is drawn with minute scales and criss-cross lines adding to the texture of the snake’s skin. Coral tattoos can be done on the back, and it is a good idea to get one where it is not hidden by clothing, like one on the arm.

If elements like the rose are added to a snake tattoo, the tattoo meaning is considered an ultimate symbol of temptation. This tattoo is known to signify the loss of purity to temptation, just as shown by the serpent who took away humanity’s innocence in the Garden of Eden. A beautiful red rose is twirled in the coiled form of a snake. Such colored tattoos are eye-catching with two different concepts: roses are considered the symbol of innocence, whereas snakes bring destruction and are known to ruin purity. A small budding rose is also seen with the big bloomed red rose. The tattoo artist did a fine job displaying the beautiful artwork of mixing two different elements and blending them. If you’re looking for a tattoo with bold meanings, this one is the best snake tattoo design that you might have come across.

This is another coral snake tattoo on the arm. The upper side of the snake is in a black and white pattern, while the lower side is shown to be in red ink. Standard designs are demonstrated for displaying the marks on the snake’s body. The design and texture of this tattoo looks quite smooth an polished.

For gap fillers, a coiled snake tattoo is one of the best snake tattoo ideas. Coral snakes are known to represent good life. The style used for tattooing the snake tattoo is contemporary. To tattoo snake design is often considered a unique choice.  Such techniques are popular among women.

Nowadays, chest tattoos are getting more and more popular. This is a spiritual tattoo done with the black ink work on the chest. Two snakes are tattooed on each side of the chest. Another element is a ring in the middle. This coral snake tattoo is a ritual tattoo that has some deep meanings to it. During ancient times, ritual tattoos were done considering two serpents, or double-headed serpents, a snake sign, the snake eating its tail, snakes with a skull which were all considered a symbol. The basic meaning of tribal snake tattoos was that they were supposed to bring meaning to a process or ritual. Such tattoo designs are part of Native American tribes and their tribal rituals.

This is a red-colored snake tattoo that is wrapped around the leg. Such tattoo ideas are drawn with 3D effects as the scales are tattooed with details. As snakes are known to shed their skins, they have many negative and positive meanings according to different cultures. This is a cobra tattoo. As this animal is known for its positive traits, there are other meanings to such tattoo design, including intuitiveness, strength, unpredictability, and protection. They are also known to represent evil ways depending upon different cultures. If you love such animals, this is the best snake tattoo design in red ink.

This coral snake tattoo uses bright colors and floral patterns to show some beautiful symbolism. The snake is shown slithering in between flowers or climbing up the arm. The snake wraps its long body around the flowers, which makes it look shorter.  The symbol on the snake’s skull and its body make the design more aesthetically pleasing.

Snakes are often shown as a symbol of evil in many cultures. In the bible, the snake is shown as the representation of lies and temptation. The snake was the one who told Eve to eat the fruits of knowledge in the garden of Eden. However, the snake is a very graceful creature, and it has a slender body which is a symbol of grace.