10 Best Constantine Tattoo Ideas You’ll Have To See To Believe! 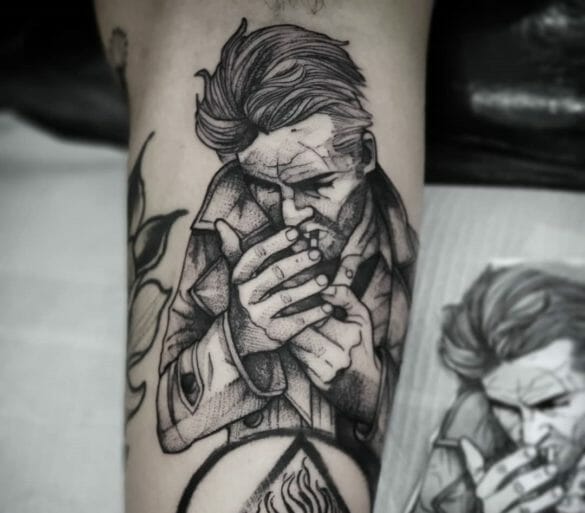 Looking for inspiration for a cool anti-hero themed tattoo? Here are 10 crazy Constantine tattoo ideas to amp up your creative game.

Fans of DC Comics will know John Constantine as the infamous occult detective from Liverpool, England.

His characteristic violent and anti-social attitude has earned him the reputation of a formidable wizard who will do whatever it takes to get the job done. John Constantine aka the Hell Blazer is a classic grey anti-hero which is one of the reasons why he is loved by fans.

He is also one of the strongest characters in the DC universe with abilities like immunity from angelic magic, powerful healing and supreme close-quarter combat skills.

Fans and tattoo enthusiasts have come up with their own interpretations of Constantine tattoo meaning. For some, Constantine tattoos may be an ode to their fandom. For others, it may be steeped in symbolism. One way or another, the sheer badass look of these tattoos make them a must-have.

Let’s look at some of the best John Constantine tattoos that are sure to make your tattoo collection a notch better.

This tattoo probably needs no explanation of its value. It’s brilliant because it is simple. A colourful design that shows John Constantine in all his alchemical glory. A lit cigarette in the mouth, collars up, ready to take on occult forces without so much as a flinch.

If you are a fan of the character and want a tattoo to symbolise your fandom, then this simple yet visually striking depiction of Constantine is just the tattoo you need.

This tattoo design is perfect for a tighter canvas like your arms, calves, or even thighs.

The Perfect Red King The Sulfur Of The Philosophers Tattoo

Another classic that is perhaps the most popular association with Constantine.

This emblem of a triangle of fire with three arrows emerging below represents the ‘Perfect Red King’, the Sulfur of the Philosophers. For the uninitiated, this symbol has deep alchemical connections. The red sulfur was a mixture of mercury (which represents the spirit) and sulfur (which stands for the soul) – the union of which is a representation of the spiritual goal of alchemy.

John Constantine is seen wearing this emblem as a tattoo on his arms as a protective device.

A very popular design among fans of Constantine tattoos is to get the ‘perfect red king’ the sulfur of the philosophers tattooed on your arms like Keanu Reeves from the movie. Who knows? It may even give you summoning powers to call angels to earth.

Speaking of Keanu Reeves, his portrayal of John Constantine in the 2005 critically acclaimed film was spectacular. Not only did he imbibe each and every characteristic of the anti-hero, but his performance also took the fandom to another level.

There is no doubt that few actors could have been as badass as Reeves in this role. And this is perhaps why this Keanu Reeves version of Constantine is the best find for you.

Here is another example that also incorporates other imageries from the movie. Constantine appears to be fighting a group of demons with the help of his magical abilities – a super cool design for fans of the actor and the hero.

Whether it’s the comics or the movie, John Constantine is almost always seen with a cigarette in his mouth. In the comics storyline, Constantine was dying of lung cancer. He managed to trick the Devil into taking it away. However, being a heavy smoker, he continued to smoke as a lung cancer survivor.

This tattoo is a creative and unique design that captures all the aspects of this characteristic John Constantine story. A packet of smokes called Constantine from Hellblazer with the disclaimer ‘Smoking kills. Satan saves.”

Even if you are not a smoker and just a fan of the character, it is still an extremely cool addition to your oeuvre of body art.

When it comes to Constantine and cigarettes, another artefact closely associated with John Constantine is his signature lighter. It appears in several instances across the comics, series and movies.

This tattoo is a unique take on Constantine’s lighter, ready to light one. The number 43 has a special angelic connection that has a special message of love, peace, stability and security.

Angels and biblical associations are no strangers to John Constantine. The connection is instant and well-made.

John Constantine found prominence through the comics. So it only feels appropriate to pay a tribute to the character the way he appears in the comics.

Comics on their own are a chic idea for tattoos. The very style with the word bubbles, the graphical art and the vibrant colours make them stand out. In this design, John Constantine is seen smoking his favourite Silk Cut cigarettes, sitting on a throne. Some of his iconic dialogues are inked around him in the style of the comic.

If you are a fan of comics, then look no further.

If you are looking for cool and well-thought Constantine tattoos to cover a larger area like your back or chest, then we have found the perfect match for you.

John Constantine constantly dealt with occult powers, magical spells and alchemy. This intricate design is a grimoire of incantations, hexes and sigils. It packs a whole lot of elements and information from the occult world that John Constantine and his fellow characters dwell in.

You don’t need to be a John Constantine fan to get this tattooed on you. Many people have used this design to symbolise their fascination with occultism and the meanings it holds.

The Lucifer Tattoo and the Archangel Gabriel Tattoo

Apart from John Constantine, the two other most prominent characters of the Hellblazer comics are Lucifer Morningstar and the archangel Gabriel.

Lucifer Morningstar aka Satan aka the Devil needs no introduction. He is a recurring character in the DC Universe and is Constantine’s accomplice and nemesis throughout the storyline.

Gabriel is a powerful half-breed angel who is turned human when Satan burns his wings. Gabriel is so powerful that even the Devil is afraid of Gabriel’s punch. He is regularly summoned by Constantine to help in his affairs on earth.

These characters have so much backstory that they both deserve an article of their own. But long story short, apart from being extremely attractive tattoo designs, Lucifer and Gabriel drip of mythological symbolism and comic book references.

The Angel and Devil Wings Tattoo

An insanely stunning take on the Angels and Devil tattoo is this depiction of one half each of the Devil’s and Angel’s wings. Spread remarkably on your back, this tattoo is really the one for you if you want a design that oozes style.

The John Constantine and Half Breeds Tattoo

Half-breeds are really common in John Constantine’s world. They can either be half-demon or half-angel. They possess the ability to walk the earth and as such are responsible for maintaining balance on earth since full-fledged angels and demons cannot enter the mortal plane.

This tattoo is a creative take on the relationship shared by John Constantine with the half-breeds that appear in the comics. For any fan, this is a crazy tribute idea that is also remarkable in looks.

So there you have it! We hope that this list will help you find the perfect Constantine tattoo for you.

A couple of tips to consider when selecting Constantine tattoos: