101 Best Colored Dragon Tattoo Ideas That Will Blow Your Mind! 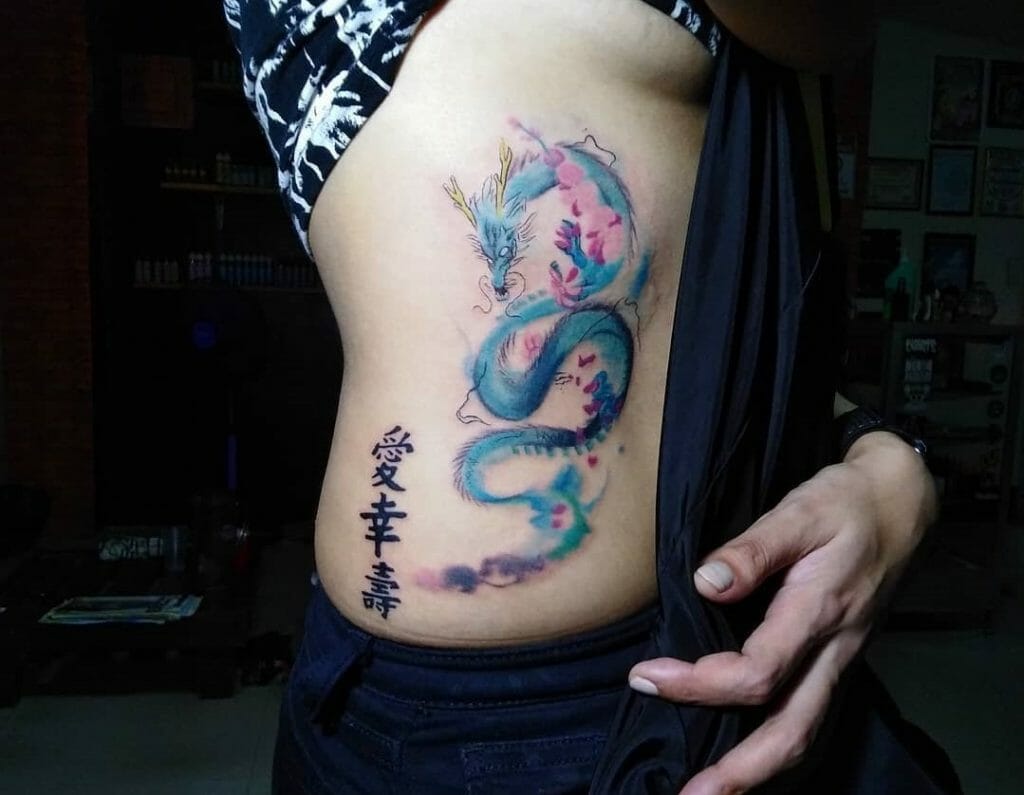 Are you looking forward to getting a colorful dragon tattoo? Here is a list of some awesome dragon tattoo designs that you need to check out!

Designs of dragons are known as one of the most popular picks for a tattoo.

These mythical animals can be found in cultures all over the world and represent a variety of things. While all dragons appear to be magnificent with large wings, powerful, and mystical, they can be seen as good and evil and are associated with fire and water.

Every type of dragon tattoo might represent something different. Tribal dragon designs are more about body art than the meaning for many people. There’s nothing wrong with having a lovely dragon tattoo simply because it’s attractive. Whether you pick a Chinese dragon, a Japanese dragon, a Celtic dragon, or a hybrid design, each one is known to represent something distinct. Furthermore, different colors and styles might have diverse meanings. Out of all other colored dragons, green dragons are known for being associated with nature. If you want something genuine, make sure you do your homework. A Celtic dragon tattoo is known to represent power as they are the leader of the clan. According to Celtic mythology, the dragon is a mythical creature known to bring the flow of energy. Chinese dragon tattoos, also known as Asian tattoos, are not very violent and best known to represent wisdom, power, good luck, and strength.

You can express your dragon tattoo idea art in a way that best suits your taste. Read to find out about some fascinating dragon tattoos and what they mean!

This is a white-colored Japanese dragon tattoo. Cute sakura flowers beautifully outline the dragon, giving it an elegant look. It is said that Japanese dragons are known to represent a blessing, forces of good vibes, strength, and wisdom. Traditional Japanese tattoos are considered manipulative elements which are known to bring good luck and benefit people. Dragon is a mythical creature and is mainly drawn on large body parts like arm sleeves, shoulder areas, or back tattoos. Sakura flowers are cherry blossoms that are known to bring transience to life. They represent the passage of time. Mixing elements like red sakura and dragon means having the strength to overcome difficult struggles because life is relatively short. If you want a meaningful and dragon tattoo with a beautiful concept, this might be a perfect choice for you.

Colored Dragon Tattoo And The Moon

This is a blue dragon tattoo done on the back of the leg. Bright colors like dark blue are used for tattooing such designs. This blue dragon tends to have scaly skin. Blue dragons are known for their gentle and forgiving nature. There are some images of a moon in the night sky at the back of the dragon tattoo. This tattoo design can be considered cool because of the blend of a natural cycle and a mighty dragon. Even the claws of the blue dragon are given correct details. The shape of the dragon entails that this is a tribal dragon tattoo design. They are known to represent their elemental form in nature. Tribal tattoos are also considered as the symbol of strength, power as well as protection.

This is a beautiful dragon tattoo. The dragon’s shape is portrayed flawlessly. Fluid shapes with cherry blossoms in blue, pink, and purple ink are tattooed to display the mythical realms this dragon belongs to. Nowadays, different colored Dragon tattoo designs are pretty popular among women. According to Japanese culture, sakura flowers are known to represent the fragility of life. They even represent the beauty of nature. This is the first tattoo by the tattoo artist. It can be called a pretty as well as cute design. Such colorful inks make us visualize mythical creatures in a refreshing and unique tattoo technique. This is one of the best colored dragon tattoo for women and men.

This is a tiny dragon tattoo colored with different inks. Sea serpents are known to represent transformation, protection, supernatural power, healing as well as rebirth. This design can be called a beautiful piece of Chinese art. Dragon’s eyes and fangs are tattooed with minor details to give it a realistic look. This small tattoo can mean many things. Serpents are considered pagan gods according to a particular myth. There is even a tiny horn on this dragon which is colorless yet getting a big focus. This small dragon tattoo is as popular as big dragon tattoos.

This is a Chinese dragon tattoo. A mixture of black ink and yellow ink gives it a glowing look. Yellow dragons are known to bring good fortune. And as this design resembles Chinese culture, Chinese dragons are also known to represent strength, power, and good luck in life. This is a powerful tattoo because of the fierce expression shown by the dragon, which the tattoo artist portrays perfectly. Even the dragon tattoo designs are sketched-based, giving it an excellent finishing touch. Dragon tattooed here is a partly healed dragon as some areas of the skin are still recovering after the tattooing process. If you like simple designs with deep meanings, this might be a perfect simple dragon tattoo design for you. Gold dragons represent wealth as well as prosperity. Some of the main elements for gold dragons are fire and metal.

This dragon tattoo is inspired by Nordic mythology. The Vikings were well aware of the dragon’s strength and significance. There are representations on buildings, in runestones, and exquisite jewelry. The dragon, or snake, was probably supposed to represent power and bravery. Wearing a dragon tattoo would represent these beliefs. The colors used to ink the tattoo makes the tattoo look unique and refreshing. the dragon itself is inked with a red coat and scales. Behind the dragon, we can see hundreds of little stars glistening in the blue sky.

This tattoo features a Japanese dragon tattoo. This covers the entire arm as well as the shoulder, including some parts of the chest. The expression of the dragon is rather aggressive as black dragons are primarily associated with vengeance. Even the dragon’s scales are tattooed with such specific details. Black dragon tattoos are known for wisdom and experience. Sakura flowers are again paired with Japanese dragons with a dark background giving it an aesthetic look. This can be considered the best dragon tattoo because of the full view this tattoo design gives. This is a classic dragon tattoo as it contains many elements hidden in the tattoo frame.

This is a panel of four different dragon tattoos. In each panel, a girl is tattooed with the dragon. The first panel is a back tattoo. A girl is lying on the dragon below the flower cover, giving this tattoo an ending final touch. Dragon tattoo designs are displayed elegantly because of the usage of colors in flowers.

The second panel is an arm tattoo drawing of a colored dragon with a girl holding a crustal ball, surrounded by beautiful flowers. To tattoo a dragon with some flowers which are not bloomed completely is a unique idea. This is a bearded dragon tattoo with other elements like some flowers and a small blue butterfly detailed finely to give its primary focus. The expression of the girl is tattooed beautifully here, as she shows no sign of fear. She’s holding the dragon with her bare hands.

The third panel shows a girl hugging the tattoo dragon while showing her affection towards this mythical creature. It is shown that even the claws of a dragon are holding her back. Some designs are made to give it an exotic look.

The fourth panel is of a girl and dragon facing towards each other. The girl expresses a look of sympathy. Some dead autumn flowers are drawn to give it an authentic look.

Out of all colored dragons, the red dragon is known to have the most exotic look. This mythological art is tattooed in a realistic style. Fantasy-based tattoos are bound to capture attention where ever you go. The imaginative stories are known to capture people’s hearts. Dragons are known to symbolize grace, and this tattoo design did pure justice to the artwork. The expression portrayed by the dragon looks realistic as well as aggressive. One can notice their fangs and the fierce expression in its eye by the 3D effect. The red dragon is known to symbolize passion as well as strength. As the art style suggests, it can also mean rage and fearlessness. Asian dragons are known to have sweeping powers. Mythological art is considered to be the biggest inspiration for tattoo artists. You can opt for this perfect tattoo choice if you like real tattoos because it’s a 3D tattoo style.

This small dragon tattoo shows a blue dragon making a wacky face. The creature’s expression makes the tattoo hilarious and is reminiscent of the beloved Mushu from the 1998 Disney animated movie Mulan. The dragon is widely used as a symbol of strength and power and brings good luck in Chinese culture. The use of blue and red colors in the dragon’s scales shows a unique color pallet, making the small dragon tattoo stand out and make it feel more appealing. The tattoo artist also draws inspiration from Chinese culture, making it a symbol of freedom, balance, and good luck.

Still looking for inspiration, then checkout this blog post about dragon tattoo ideas.

Looking for more examples of best dragon tattoos for inspiration, check these out –