10 Best Clock Gear Tattoo Ideas That Will Blow Your Mind! 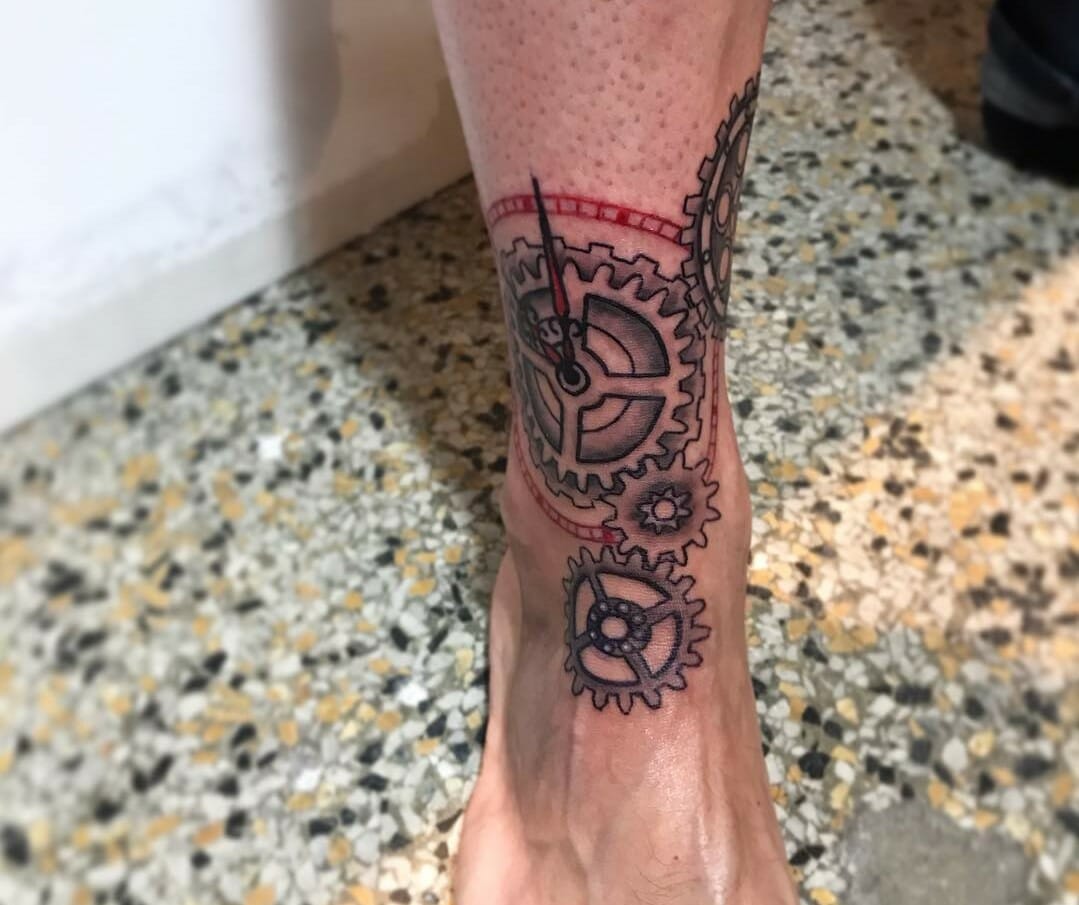 The clock is known as one of the oldest human inventions.

Our current way of measuring time in 60-minute increments dates back to the ancient Sumerian civilization circa 2000 BCE. The Egyptians used Obelisks and water clocks while candle clocks were used mainly by the Chinese and Japanese.

Hourglasses and sundials were often known to be used by the Europeans. The hourglass tattoo includes a skull and a clock. It is known to symbolize the passing of time. A skull tattoo is usually associated with death or the end of life. When combined with the hourglass and clock, it sends a message that our time on this earth is limited. Melting clock tattoo designs represent a dynamic experience of life that has happened in the past. Pocket watch tattoos were rather popular as they were often used as a jewellery item. Clock tattoos can mean endless love, stability, or existence. If skulls are paired with clock tattoos, it is known to represent mortality as well as death. A broken clock tattoo is known to be associated with the concept of leaving the past behind.

The first tattoo is a half sleeve tattoo that includes elements like a dove, a compass clock, and two roses. This tattoo design will be considered a great choice if you want black and grey tattoo work. Commonly, the meaning behind a dove tattoo is known to mark a fresh start. The dove’s wings are in a position to fly and soar in the sky which marks the new beginning of its journey. Roses and Doves in a single design also represent beauty, love, and affection. Time pieces are tattooed to specify a specific period or a particular moment in someone’s life. This clock tattoo is instead considered a tribute to someone. Merging flowers with clock tattoo designs often represent everlasting love. The shades are eye-catching because the clock designs are rather refreshing.

Another half sleeve tattoo with a fantastic design might be an excellent choice for your other hand. Roman numerals are patchworked, encircling the clock tattoo as well as inside the clock. Clock tattoos for men are also known to hold some sentimental value. Money notes are designed to give a smooth flowing outline to the clock tattoo. This design idea can also serve a meaning which says that ‘Time Is Money’.

The most valuable thing in life is to manage time. The clock gears are designed beautifully to highlight the inner workings. This clock tattoo design appears to have an artwork that consists of an outer outline of leaves. These tattoos can be considered a good choice if time and money are some elements that have impacted your life deeply.

This clock tattoo design is the most abstract one of all ideas. The artwork is flashed in a very realistic way. A pocket watch is tattooed on the leg with great designs. Two gears are outlined diagonally with large letters in Roman numerals. The clock readings show that it’s 6:05. Roman numbers from seven to ten are covered up with clock gears, making it one of the most interesting tattoos.

Gear in tattoos represents teamwork as well as cooperation. A broken clock is known to represent bad luck or misfortune. The gear above has a shiny appearance, while the below ones are the shadow which has black and shades of grey ink. This is considered one of the best clock tattoo ideas for men.

This is a significant illustration of a pocket watch tattoo. Watch tattoo represents the birth of a loved one. The birth time of the person might be 7:04, as the clock hands show. The name SIEM and the date of delivery of the baby, which is 27/01/2020, are scribbled on the ribbon, which encircles the pocket watch. The symbolism tends to become powerful when it is combined with a clock.

Time pieces are often related to life and death aspects. At the same time, a broken clock resembles disregarding the time. Timepieces like clocks and sundials to watch gears have always been popular tattoo ideas. This is a small as well as detailed upper sleeve tattoo. Pocket watch tattoos are popularly known because they can symbolize the most important moment of someone’s life. They were often regarded as high-value items as, for generations, they were considered as a family heirloom. Such elements work great for half sleeve tattoos.

Many elements are combined to make such a dynamic design. Elements include eye, Roman numerals, pocket watch, and gears. A typical tattoo of an eye pairing with clocks depicts the confluence of organic humanity with a more mechanical, structured, and constructed watch. A pocket watch is tattooed, fully showing the lid as well as the needles. The time shows 2:56 making short needle points almost to 3. Gears are designed in the background as well as the left side of the mainframe.

Clock tattoos for men show hidden realities, inner workings, and the complexity of emotions and the human psyche. Feelings buried beneath a beautiful facade are all represented by clock tattoos that incorporate the cogs of the clock as a visual element. This gives the clock tattoo a realistic style.

This is a massive forearm sleeve tattoo. Its placement on hands as well as arms give more space for detailing work. Mentioning names of family members with clock tattoos signifies well compared their importance to each other. Managing family is considered as necessary as managing time in the future and life. They represent endless love towards the people they love the most. There are two big clock tattoos with different styles.

This is a lettering tattoo that includes names, which are Pascal Deon and Kiara Celine. Both clock tattoos show a different time. Such tattoos are said to remind people to spend time with family. It is a creative way to represent the valuable things in life.

Birth, time, and a death tattoo are considered significant elements for clock tattoos. This clock tattoo has some prior years written on its dial. Some of the meanings related to Birth Clock Tattoos are your realization that a person’s life is finite. Another reason can be that it is critical to seize each moment and make the most of it. It can also represent a moment or a time in your life that will live on in your heart forever, such as the birth of your darling kid. Some of the years are 1976, 1977, 2005, and 2010. These years are replaced by roman numerals like 12, 3, 6, and 9. The time reading shows that it is 1:56, which is almost 2 o’clock. This is a forearm tattoo in memory of a specific period. Waves are designed to give a beautiful outline to the clock tattoos.

Merging flowers with clock tattoos gives the design a glamorous look. A yellow-coloured rim encircles the clock watch tattoo. Even the dials show the mechanism of the gears in faded yellow ink. Such techniques can have meanings like everlasting and someone’s presence as they work well for men and women. The clock time shows 3:40. The humble revolution has made its roots in a noble military duty where gentlemen can enjoy the pleasures of floral tattoos without surrendering their masculinity.

Aside from connecting traditional links with healing, the poppy flower is also associated with Remembrance Day. While some refer to it as Poppy Day, the flower’s underlying meaning is considered to be enjoyed by all men. The majority of males choose this design to commemorate and remember those who died in the line of duty while serving in the military.

A clock tattoo can represent life, time as well as death. This tattoo shows a compass with a mechanical wall clock. The clock has its inner gears exposed which offers its mechanism. The gears represent the inner feelings of a person and give an insight into the complex works of emotions behind a human’s personality. These gears, along with a rose shows gentleness within the person and the compass gives a sense of direction and purpose in ones’ life.

Finally, we are all tied by time, and clock tattoo designs may signify a variety of significant human realities. Whether you’re commemorating a significance of life, achievement, or fascinated by this elusive fourth dimension, a clock tattoo might be a meaningful symbol to be tattooed on your skin.

This is a full sleeve tattoo which can be considered as a melting clock tattoo. Below the clock is the half tattooed face of a woman doing ‘shhhh’ with a finger on her lips. This action is done to shush someone or to keep silent. The reading of the clock shows 10:10, where the dial is designed with gears. The gear mechanism is beautifully displayed, showing the importance of hours. Tattoos about time and keeping silent can convey different meanings. Such designs can also represent the period of the healing process. Shades of grey are highlighted with black ink giving it a 3D look. Different styles of inking processes are applied for such a dynamic tattoo design. Such designs are popular among women. The best placement on the body for such tattoos can be on the arm or part of the body. If you’re a woman who believes in working hard in silence and letting your success make some noise, such a design can be considered a creative choice.

You can incorporate and take inspiration from some more timepieces and clock-inspired tattoos that will create such a meaningful impact, and you will wear them with pride.