10 Best Claymore Tattoo Ideas That Will Blow Your Mind! 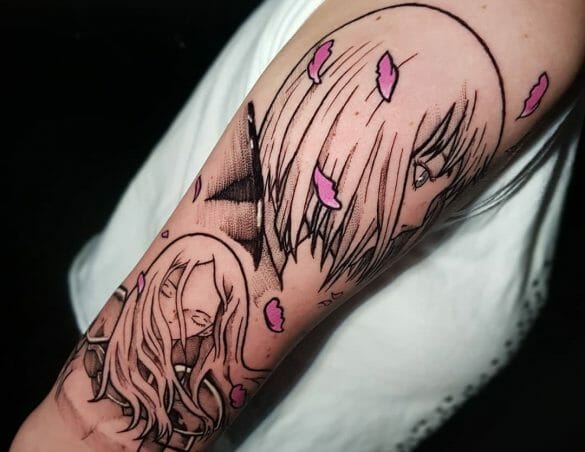 Are you looking forward to getting a claymore tattoo? Here is a list of 10 awesome claymore character tattoo designs that you should check out!

Designs of sword tattoos or dagger tattoos represent losing someone close or even a sharp betrayal.

Old claymore tattoo designs were most famous in Scotland.

Dagger tattoos are known to represent danger or any terror and conflicts. New tattoo designs are inspired mainly by the Claymore Anime, where anime fans are interested in getting cover-up tattoos on their skin of manga panels by showing a photo or videos, which provide scenes from the basic plot.

The collection of such panels from manga pages are nowadays popular among anime watchers or manga readers. Such manga or anime images are processed in old-school tattoo signs. One could apply different meaning if the dagger tattoos are coupled with skulls, swords, or even roses. Some are meant for sharing romantic love, lost love, the duality of good or evil, or even losing someone to death. Find out more about claymore characters to decide a design if you want a claymore tattoo installed on your skin.

You can express and choose your claymore idea art in a way that best choices suit your taste. Read to find out about some fascinating claymore tattoos and save what they mean!

This tattoo is inspired from the manga and anime, Claymore. The main character, Clare is featured wielding her sword. Claire is a Claymore known as The Fastest Sword of all Claymores. A claymore is a Scottish sword based on the note that the two-handed blade was widely used by Scottish Nights from the 15th to 17th century. For example, the symbol on Clare’s oath also has the character which looks like a claymore. The tattoo is not colored, which makes it look like the pages of a manga. The starting point can be seen from its art which is just a drawing from the manga. The tattoo design is very detailed and bold and something that you’d like to show off. If you’re a fan of the manga, you will love this design.

This is a tattoo of awakened Jean. Jean was known as an offensive fighter as well as a Claymore member. She belonged to Clare’s generation. Based on her description, she is known to resemble a graceful butterfly. With her beautiful wings and sharp claws, the illustration design shows her strong desire. She is known for her sword drill technique. It is said that her mental strength retains her personality when she refuses to get swayed under pressure. This tattoo design is wonderfully visualised in knotwork lines. She stores her energy and releases it by twisting her arm to serve a powerful attack.

This is a massive back leg tattoo. Panels of manga series are drawn in black ink on the calf muscles. Teresa is the name of the girl shown here, another Claymore character. She is known as one of the most vital members of the other nine members of the generation. She was known to have a nickname as Teresa of the Faint Smile. It is said that her graceful smile can slaughter her enemies. Even letters from the manga panel are inscribed, giving more information about the scene. Dialogues like “But I Don’t Feel Like Dying Just Yet” show her willingness to fight and complete her task. Her face is tattooed perfectly, which represents her being the bearer of strength. This work is known as an art of a black ink design tattoo.

Among all sword tattoo designs of Claymore, this is well known for its customized shield and sword tattoo. This weapon is unique among clan members in Scottish highlands. The Claymore was known to be created during the Renaissance. Scottish claymore sword with Gaelic shield is tattooed on the arm in black ink with some light grey shades. This illustration is also known as a realism tattoo which a Scottish artist customized. The basic sword tattoo meaning is that this design symbolize strength, power, freedom, with honor. If you’re looking for some cool designs, this tattoo can satisfy your desire for a badass tattoo.

The tattoo shows a manga panel from the manga Claymore. The character shown here is the main protagonist of the story named Clare. She is portrayed as intimidating and has a strong feeling here. The tattoo is inked chiefly in black, with only her eyes inked with two different colors. The other color in her eyes is because, in her human form, Clare is shown as a weak character with green eyes, as shown on the left side of her face, but in her partially awakened state, she becomes monstrously strong and has yellow eyes with slit-like pupils.

The tattoo here shows a picture of Teresa similarly to how Clare was established in the above tattoo with her one eye shown as her eyes in her claymore form, which are grey, and her other eye is read in color in her awakened state. Teresa is the twin of the protagonist Clare and is also a goddess of love. She is one of the eight top fighters who exceeds the original Abyssal Ones and is regarded as the most powerful ever produced.

This is a neo-traditional tattoo. The symbol of the warrior belonging to the organization and the face of the warrior is portrayed in the panel. The extreme action of the warrior in a fight is picturized beautifully by the tattoo artist. Small details like expression as well as the beauty of the character of a Claymore are captured here. This is the perfect covering arm tattoo for crazy fans of the Claymore saga. This can be considered an ideal choice for girls as Teresa represents strength and is a strong warrior.

This longsword tattoo done on the arm shows a flaming claymore. The sword has the power of flames and can burn anything with its elemental power. Such flaming swords are famous in many anime and games like Rengoku from Kimetu no Yaiba and the flaming Claymore from Genshin impact. Flaming swords are shown as weapons that are possessed by solid characters.

The Claymore sword tattoo design has vivid colors, and orange and yellow are used to have vivid imagery of the life by sword tattoo. The art style makes the tattoo feel cartoony and gives it a playful image.

These are the symbols used by the characters of the particular organization in Claymore. It is known to serve as a unique mark given to the candidates working in the organization. This special symbol represents their identities as well as their names. These are fine line tattoos. Warriors can even have more than one symbol. It is said that all the warriors in the organization are female. This is because they are found more prone to awakening. The awakening process is because females are unable to resist their urges known to bring sexual pleasure. Earlier, the organization included male warriors too.

This is a tattoo of the flag of Scotland draped on the Claymore. It is said that in ancient Scotland, people would often get tattoos of warriors. Scotland has always celebrated body art. Future generations are known to continue their love for art as well as skin tattoos. Letters saying “Millie Jay” are inscribed on the flag here. Traditional patterns with the enthusiasm of modernity are a part of the collection for tattoo pieces. The description of a Scotland Flag includes a saltire which is a white X-shaped cross. It is also known as Saint Andrew’s Cross. The white in the flag is also considered to represent peace as well as honesty. Blue in the flag represents truth, perseverance, justice, and loyalty.