101 Best Chinese Tattoo Symbol Ideas That Will Blow Your Mind! 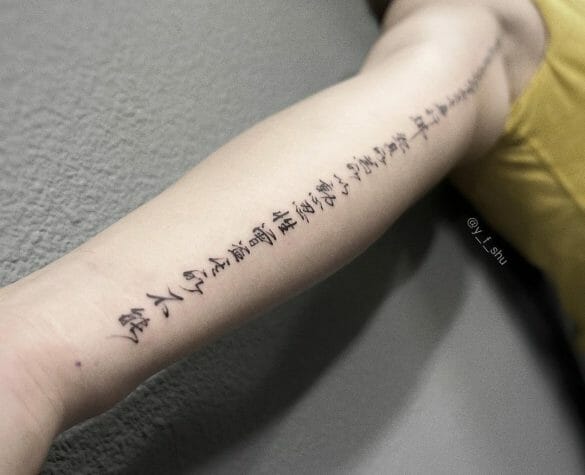 Looking for the best Chinese characters and symbolic designs for your next tattoo? Then you will these amazing Chinese tattoo symbol ideas for you!

Chinese characters and symbols by themselves alone define a word.

Well, in English, we use many letters to define a word. But for a language like Chinese, they use characters that represent or mean comments, an object, or even a grammatical element.

The most famous Chinese symbols that you might have seen are ‘de,’ ‘Yi,’ ‘shi,’ etc. the character of ‘fu’ is widely seen in China, representing good luck and good fortune. If you have ever visited China, you might have seen this symbol painted everywhere. Well, you can even get this symbol as a tattoo for good luck. Also Chinese use the symbol ‘aei’ for love. Not only the words and traditional characters, but you can also get traditional animal images like dragon, lion, and tiger in your body as tattoo designs as well. The younger generation may pick tattoo designs as the laughing Buddha, a Chinese character, Chinese words, a Yin Yang design, a Chinese dragon tattoo or even Japanese symbols. If you want to know how to make Chinese symbol tattoo unique, keep reading this article. Here we will explore the most popular Chinese tattoo designs for you below.

This Chinese tiger tattoo has been widely accepted as Chinese symbol tattoos in traditional culture. This Chinese tattoo was done with inspiration from an old Chinese painting. Orange blossoms, similar to cherry blossoms are included at the top of these Chinese tattoos. These tigers are one among popular Chinese symbols to show courage, strength, royalty, and energy. Chinese communities worship the yin yang concept. And the tiger is used to represent the yin – as energy, in these Chinese tattoo designs. The Chinese culture has always adored animals, animal names, and dragons. The tiger tattoo artist is creatively designing the fiery-looking tiger. With lots of patterns and dots, a unique way of art has been created in a Chinese tattoo on the skin. The tiger tattoo shows the Chinese culture worship and the animal species that are rare to the Chinese regions.

The tattoo artist has replicated this tiny winged long tail bird from a Chinese painting in this tattoo design. Traditional Chinese history has stories with birds, animals, mountains, forests, fountains, etc. in ancient times, the Chinese living in China had a deep love for nature and the animals they lived in their heart. The tattoo artist amazingly designed the beautiful scenery of sunset and a bird-watching it from a tree branch. Giving perfect colors that provide the tattoo design an authentic look, this body art is a fantastic example of representing nature and traditional Chinese stories. If you are wondering, what does my Chinese symbol tattoo mean? Here it is. Apart from the western world, the Chinese people use these symbolic tattoos to connect with nature and their traditions and past lifestyle. These tribal tattoos of traditional Chinese characters of stories like the bird are quite an out of box design for tattoo design when we look at all the stylish dope tattoos of today. But still, this artistic tattoo has all the elements perfectly combined to bring the naturistic effect of the tattoo design image.

Chinese tattoo symbols like bunnies or a rabbit represent good fortune, beauty, and love symbols. Chinese symbol tattoo ideas with these popular Chinese animals like rabbits are cute. This Chinese love symbol tattoo is done with lines and curves. The small rabbit bunny tattoo is given an outline tattoo design with black ink. Also, as the size of this Chinese tattoo is small, you can get this tattoo anywhere in your body. This Chinese tattoo design is given a shading effect. If you visit a tattoo shop, you can get some of these minimalistic and straightforward Chinese animal tattoos.

Chinese calligraphy is one of the famous art letterings of characters in Chinese languages, including the official dialect of Mandarin. Using Chinese characters, you can tattoo a quote or a word that is meaningful to you. The word inked here means “quiet”. This traditional Chinese character is written in black ink. However, you can choose a more bold colour and font, as per your style.

Chinese font tattoos and Chinese character tattoos are gaining popularity among tattoo lovers and spiritual and traditional people. You can have this Chinese symbol tattoo inked on the arm, wrist, or upper arm due to its small size.

The owner of this tattoo has chosen an interesting placement too on the back but towards the shoulder. The client can then think of expanding from here to add more motifs or tattoo artwork at the center of the back. The simple yet compelling design makes this tattoo more mesmerizing. The year 2022 is the year of the tiger and many people may consider getting the zodiac symbol of the tiger especially those born under it as their next tattoo.

The tattoo is a smashing example of negative space usage and an all-black tattoo. As we can see the artist has created a blackwork band on the forearm of the owner with the Chinese symbols placed in the middle as negative space. This makes the symbols not just visible but just makes you want to take a closer look at them. The placement on the forearms is perfect so that the owner can draw some inspiration from them while going through his life. This can be done for a woman too. Blackwork tattoo has much inspiration from the past like th Spanish blackwork which was fine embroidery done on a piece of fabric. This tattoo is like an amalgamation of two old cultures and traditions of the world to bring out one fantastic piece of artwork which is expressive without being loud.

Small Chinese tattoos like these are favorites for people of China to get on their skin. As they are small, people could get them anywhere in their body like arms, shoulders, chest, legs, or even in their hands and fingers. You can also find these small Chinese tattoo designs among flower tattoos. The cherry blossoms or the tiny orange blossoms are shown in these small traditional Chinese pot tattoos. As a Chinese symbol for loyalty tattoo, you can have this beautiful pot-like chandelier tattoo to convey the same. Chinese Flower tattoos bring happiness and pleasure. Similarly, these Chinese tattoos of traditional and cultural values, which show the elements of light shades in a Chinese festival, also bring a sign of happiness and prosperity. Chinese symbols like these get the message of festival seasons coming soon.

One of the most appealing and detailed Chinese tattoo designs on this list! The eyes of this Chinese dragon lion are so clear and wonderfully patterned. This Chinese tattoo symbolizes the tradition and culture of China. Chinese dragon tattoos always have an element of Chinese pride shown in the tattoo designs. Some people even choose these lion dragons as their Chinese zodiac signs. Having these dragons as lions in their Chinese zodiac sign means this animal representation is more valuable and essential for them in their culture. Chinese characters like dragons and lions represent good luck. Chinese characters from Chinese mythology, like the dragon lion and the tiger, are made as tattoos for people to get on their arms who follow and are passionate about Chinese history and mythology.

The official written language of Chinese people is Mandarin Chinese. Well, most Chinese words are today written in simplified Chinese letters and characters. This small cute Chinese character tattoo is one of the rainbow color pattern tattoos that many people get to express love for their close and affectionate ones. The three colored Chinese characters in this tattoo mean the universal line, ‘I love you. You can get these Chinese characters’ tattoos anywhere on your skin. They even fit in your fingers as tattoo designs due to their small size. You can also get any of your favorite three colors to spell “I love you” in Chinese in your arms as tattoo designs.

These humble and straightforward red spider lilies are used as a sign of good luck and love in Chinese tattoos with your loved one’s Chinese name near it in Chinese characters. You can write a Chinese word or any other quote on the side of the tattoo design. In this Chinese tattoo, the name is given a black color. And the red lily flower is done in red ink. You can get them in other colors of your liking. These tattoos can be done behind the arm sleeves or in the legs or thighs. You can even get some more elements added to this simple design to make it more crowded. Or, if you are a person who likes things to be aesthetic and straightforward, you could choose the same pattern as this Chinese tattoo.

Some more suggestions if you are looking for a traditional Chinese culture tattoo or a modern take on it.

What is the meaning of the Chinese tattoo symbol?

There are a variety of Chinese tattoo symbols with different meanings. For example, the dragon is a symbol of strength and power, while the phoenix represents rebirth and renewal. Other popular symbols include the lotus (purity and enlightenment), tigers (courage and strength), and snakes (wisdom and transformation). No matter which symbol you choose, it is important to understand the meaning behind it before getting inked.

How do I pronounce the Chinese tattoo symbol?

The pronunciation of Chinese tattoo symbols can vary depending on the character used. For example, the dragon is pronounced “long” in Mandarin, while the phoenix is pronounced “feng”. It is always best to consult with a Chinese speaker or language expert before getting a tattoo, so that you can be sure of its meaning and pronunciation.

How do I choose the right Chinese tattoo symbol for me?

Choosing the right Chinese tattoo symbol is often a matter of personal preference. However, it is important to keep in mind that these tattoos are permanent, so you should choose a design and meaning that you are comfortable with for the long term. It is also worth considering the placement of the tattoo, as some symbols are more appropriate for certain body parts than others. For example, the tiger is often tattooed on the back or chest, as it is seen as a powerful and protective symbol.

How do I take care of my Chinese tattoo symbol?

As with any tattoo, it is important to take care of your Chinese tattoo symbol properly in order to keep it looking its best. This includes avoiding excessive sun exposure, which can fade the ink, and keeping the area clean and moisturized. If you have any concerns about the appearance of your tattoo, or if it starts to itch or peel, be sure to consult with a tattoo artist or dermatologist.