10 Best Chinese Snake Tattoo Ideas That Will Blow Your Mind! 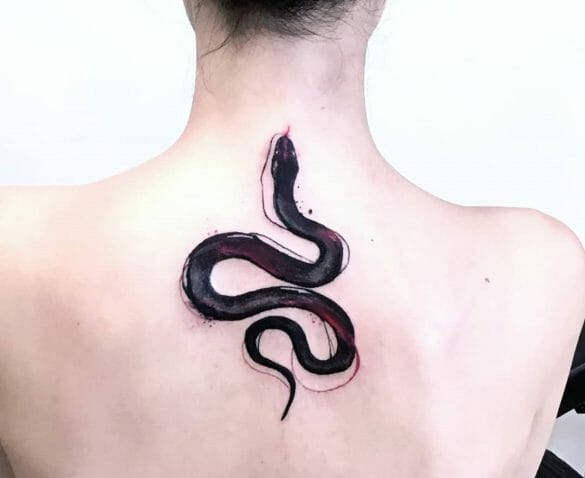 Thinking about getting a snake tattoo but out of choices? Here are some amazing Chinese snake tattoo ideas for you!

Snake tattoos have gained much popularity over the last few years.

According to the Chinese culture and its 12-year cycle of animals in their zodiac signs, the snake is the 6th animal. Each year with the different animals has a different meaning.

A snake traditionally represents fertility and the force of life; therefore, it is a popular life choice. A Chinese snake tattoo, on the other hand, symbolizes longevity and good fortune. It is also a representation of the power of nature. In many cultures, if you are able to control the snake, you will be able to control nature. In traditional Chinese culture, the snake can last as long as a turtle.

A Chinese snake can have different meanings like sometimes, it can be linked to prophesy and wisdom, and sometimes it can be considered as the protector against bad luck.

Getting a Chinese snake tattoo can be a bold choice for some people; however, if the meaning and the design appeals to you, what is stopping you from getting one?

Here is a list of some of the best Chinese snake tattoo design ideas curated just for you!

A Dog And The Snake

This tattoo is not of the traditional Chinese snake. It includes a dog, a snake in a garden full of sunflowers.

According to Chinese culture, a dog is one of the zodiac signs that symbolizes protection. A Chinese snake symbolizes wisdom. Sunflowers are considered to be the symbol of good fortune and long life.

This tattoo also includes sun and a blue sky. The dog and the snake have some geometric patterns. This particular tattoo is made with bright colours that make it more appealing. This design was made on the upper arm, but since this is a comparatively larger design, you can make it on the back, chest or even as a sleeve tattoo.

A Tiger And A Snake Tattoo

According to Chinese history, the tiger is a symbolism of ferocity, courage and dignity. They are also considered as the protectors of the dead.

This tattoo shows the tiger eating a snake. The head of the snake is on top of the head of the tiger. The tiger looks ferocious, and the snake has its fangs out. This kind of tattoo could be a symbol of passion and overcoming the toxic habits of life.

This tattoo is made with black ink, and the scales of the snake are made with such intricacy that they almost look real. The shades of black and grey make this tattoo look really elegant. However, you can also add some colours to the design to make it more appealing. It is placed on the back, under the neck, which looks like the ideal place, but you can place it wherever it is comfortable.

This is one of the best Chinese snake tattoos that symbolize strength.

This tattoo does not look exactly like a snake because the scales are not clearly visible. But it is clear that the snake is looking ferocious as its mouth is open and the fangs are out, almost as if it was hissing.

This design looks like the Chinese zodiac sign snake tattoo. According to that, people born in that year are charming, wise and intelligent.

The tattoo is made with black ink and some shading inside the body. This design is placed on the side of the chest, but it would look great, like a sleeve tattoo on the hand or leg.

In different cultures, snakes are considered sacred. A snake is a symbol of honour and auspice in China. Ancient people in China also believed the snake to be a symbol of good harvest and earth. The above image of the snake coiled usually appears on the bronze cultural relics used to worship.

The design of the snake has differents elements instead of its own skin, like a lotus flower and other flowers.

This tattoo design is amazing, and you should definitely consider this for your next body art design!

Usually, when snakes have a triangular head or head shaped like an arrow, it means that they carry a lot of venoms. It represents strength and wisdom.

This is a very simple snake tattoo design. It is made with black ink and is small, so it is placed on the side of the little finger. However, you can have different designs similar to this, like a snake bracelet, which will look like a snake wrapped around your wrist or ankle.

Snake In A Knot

According to Greek Mythology, the serpent played a very important role. They were the symbols of evil power and chaos; they were also the symbols of life, fertility and healing, very similar to Chinese mythology.

This design shows the snake in a knot with its own tail. This design is made with black ink and some shades of black inside it.

This is one of the best Chinese snake tattoo designs you can find.

Many people believe in the Chinese zodiac signs and the characteristics they have to describe the people born that year.

The snake means that the people born in the year of the snake are wise, intelligent and charming. They are also deep thinkers, plan in advance and are determined to do what they want.

This design is made in black ink, and it looks like the snake is slithering on the hand of the wearer. The scales are intricately designed and look realistic. You can add some colours to make it more eye-catching.

The snake or the serpent plays a very important role in the Bible. In Genesis, the serpent is seen as a deceptive creature who provokes Eve to have the forbidden fruit in the garden of Eden.

This design is a very simplistic design of the Chinese snake. This design is made with simple black ink, and the fangs of the snake are out, making it look like it is hissing.

The Snake And The Flower

When a snake is portrayed alone, it has a more dark meaning, but when you add flowers to the design, it portrays gentler tattoo imagery that represents rebirth, transformation, fertility and change.

You can also add other elements to this design like roses, skulls and other symbols that could mean different things.

This tattoo is a variation of the last design. This is a larger tattoo that shows a powerful snake protecting a bouquet of flowers. The design is intricate and extremely beautiful.

This design is placed on the side of the chest, but it would also be very cool as a sleeve tattoo.

If you liked the above designs, you should consider these other designs too like –