10 Best Chicken Tattoo Ideas You’ll Have To See To Believe! 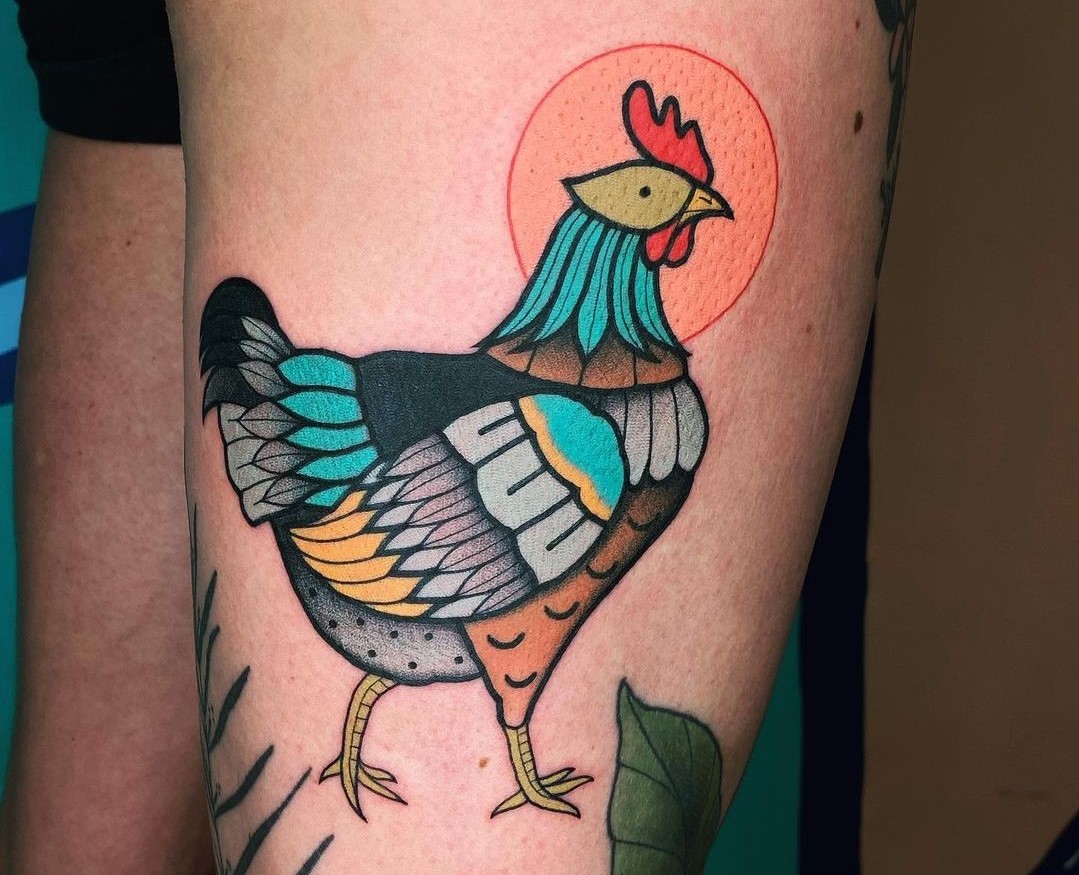 In search of a chicken tattoo that speaks to your soul? Check out these images and pick the tattoo that matches your personality, perfectly!

Chickens are very common poultry birds and serve a variety of purposes for humans.

However, not until recently, chickens became a common bird for tattoos, as well. So now, lots of men and women are seen carrying elaborate chicken tattoos, done using traditional or modern designs.

It might be interesting for you to note that chicken tattoos are associated with a ton of good and positive meanings. Contrary to popular belief, a chicken symbolises bravery, confidence, and intelligence. Additionally, chickens can also be used to signify punctuality, as roosters are known to give out calls at the break of dawn every day. Apart from all these meanings, a chicken tattoo can also be gotten as fun or eccentric tattoo. Hence, the best part about chicken tattoos is their versatility, both in terms of depictions and meanings.

With all this information in mind, let’s dive right into the amazing chicken tattoo images and you can pick the one you want to get inked with, with ease.

Flowers are like the gems adorning the crown which is our planet. Hence, the addition of floral patterns can make any tattoo design better. In this tattoo, only the outlines of the flowers and the chicken have been inked. The thin outline is making this tattoo look like someone has actually scribbled it with a pencil. The simplicity of this chicken tattoo is what is making it unique.

If you are interested in a much more realistic floral chicken tattoo, then this tattoo is the one that you need. Here, a hen seems to be inked, with daisies on its lower side. The aesthetic of this tattoo is amplified by the muted colours which have been used. The gradient effect was created to make the plumage of the hen is looking very artsy. A tattoo of this sort would look great on the arm, as pictured.

One of the cutest things about chickens is their chicks. If you find chicks just as endearing, then why not get a tattoo depicting a mother hen and her chicks? Here, the hen and chicks are looking quite animated, which is increasing the cuteness of the design. The red bow around the hen’s neck is also an adorable addition. A chicken tattoo of this kind can also be symbolic of your journey as a mother.

Roosters are quite spectacular to look at, with their brilliantly coloured plumage, elongated comb on their head, and the prominent wattle beneath their beak. Hence, rooster tattoos are often nothing short of art. For instance, as you can see in this tattoo, a rooster has been depicted with beautiful green and black feathers. The red facial features are pairing well with the combination of light and dark green ink. A rooster tattoo of this kind and style is perfect for the back or chest.

A more realistic rooster tattoo would be this one, which is only featuring the head of the bird, instead of the full body. The orange-yellow sun in the background is not only forming an enticing backdrop but is also symbolic of how roosters give their calls bright and early in the morning. The allure of this tattoo is further enhanced by the grey and white feathers which has been inked, giving this rooster tattoo a very pastel and subtle look. You can get this tattoo done on your arm, as pictured, or even on the back of your shoulders.

Geometric designs and patterns can uplift the whole look of any tattoo. So, if you can’t be sure about which chicken tattoo would look the most perfect on you, you can always rely on a tattoo like this which features geometric patterns. In this tattoo, the entire chicken has been designed by combining geometric shapes. The tattoo has become even more eye-catching due to the various colours used, none of which are looking out of place. This tattoo is a different take on traditional tattoo designs and would look great anywhere on your body.

A hen and rooster tattoo like this one will undoubtedly make you fall in love with it. Even though this tattoo has been designed with black ink only, yet it is quite easy to differentiate between the hen and the rooster due to the facial and anatomical differences. The interplay of fully black parts and only black outlined parts in this tattoo is also creating a graceful effect. You can also ask your tattoo artist to add colours to this tattoo to make it more realistic if you want. However, this style is quite new and unique.

Black tattoo designs hold a power of their own, so why not get a black chicken tattoo with perfect detailing? In this tattoo, the whole body of the chicken has been made black. Even then, the features on the body are visible due to the use of lighter and darker black shades. The bright red comb and wattle will surely capture the attention of those around you, bringing their gaze to the face of the chicken, which is holding a sweet and endearing expression.

A more traditional black chicken tattoo is this one, which is also combining the shades of black and red, but in a different way. Here, the feathers of the chicken have been created differently, and the unique detailing lies in the space between the outline and the middle portion of the body which is not coloured. The gradient effect created by that is helping highlight the features of the chicken. The yellow-orange legs are also pairing well with all that black.

A little outline chicken tattoo can be a good way to start off your journey in the world of tattoos. This tattoo is simply a small outline of a chicken, with no other special features. A tattoo of this kind can be a personal symbol for you, while it will keep others guessing about what it could mean. You can ask your tattoo artist to create this in an even smaller size if you want to. A little tattoo of this kind will look great on the wrist or behind the ear.

Away from the traditional chicken tattoos, how about getting a tattoo of a chicken foot? As you can see in the image, the tattoo has been created in a simple manner and is only showing the outline of the foot. You can get this tattoo done anywhere on your body, including on your own foot.

If you prefer more elaborate designs, then this foot tattoo is the perfect alternative. Here, apart from the chicken foot, a crescent moon and two gems have also been added. The mystique of this tattoo is enhanced by the black shading and precise use of white ink to create a shiny and glittery effect.

A chicken and pig tattoo was generally gotten by sailors, usually one on each foot, to symbolise good luck while being out on the sea. Hence, this is a traditional sailor tattoo that holds significance. However, whether you are a sailor or not, you can still get inked with this design, if you love sailing concepts, or just love pigs and chickens. Here, both the pig and chicken has been created to look like art, with just lighter and darker shades of black. The rooster is seemingly possessing an angry expression on its face, while the pig is wearing a smirk. Subtle quirks like this are definitely what you need on your skin!

Chickens are not exactly known for their flying skills, so a quirky and animated tattoo of a flying chicken will surely be a comic relief on your body. Here, the big eyes of the chicken, along with other prominent features, is giving this tattoo an exaggerated look. The way the wings and feet are positioned, with the two blue half-circles around the foot, are conveying this little chicken is in flight, brilliantly. You can get this new kind of chicken tattoo inked on your arm or leg.

Now that you have gone through the various new designs relating to chicken tattoos, you can choose whichever suits your preference. Chicken tattoos, which include hen and rooster tattoos, can be created using a wide spectrum of design ideas such as-