10 Best Chicano Tattoo Ideas You’ll Have To See To Believe! 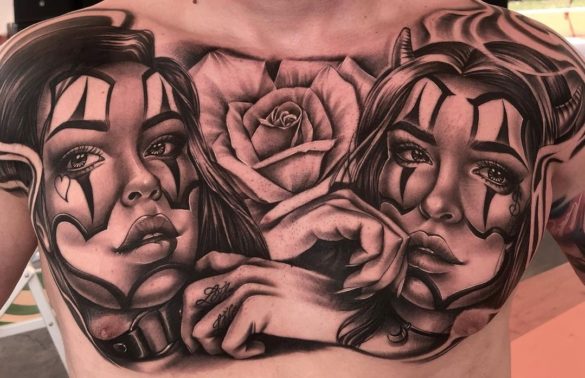 The history of the Chicano tattoo dates back to the 1940s and 50s.

This style of tattooing started in Los Angeles, California, Texas, Arizona, and New Mexico. The history is steeped in Mexican-American culture.

During those times, people of many cultures faced discrimination. The term ‘Chicano’ started as an insult, but quickly became an identification for the movement led by Mexican-Americans. They then built Barrios, their own group and place in the city. In this Barrios, Chicano fashion developed. This also fuelled the Chicano art movement in later times, where artists fought to establish their own unique art form. This tattooing style then began with the Pachuco gang. Pachuco members were seen donning crosses in their hands. From there, it became popular and became sacred to the Chicanos. The Chicano meaning lies behind the feelings inside the gang. The tattoos still represent morals, ideals, and values regarding one’s community or family. Go through the just below to know more.

Chicano tattoo culture is an old style of tattoos from long back in history that gained extreme popularity with time and for good reason. These tattoos come in different styles and themes and ensure that your body art is not lost in the crowd. It may have started as gang and prison tattoos, but they don’t hold the negative connotations anymore.

The picture shows a word tattoo in Chicano tattoo art with an inspirational message in Italian, that reads ‘Combatto per quello in cui credo’, which means, ‘I fight for what I believe in’.

One of the most common among many Chicano tattoo styles or themes that you can see on the street is the Chicano mask tattoos. Specifically, the ‘smile now, cry later’, or ‘laugh now, cry later’ tattoo. This tattoo originated in prison and has the meaning that ‘do what you love now, or you might be dead or in prison tomorrow’.

The picture above is of Chicano theatrical mask tattoos where one is a laughing mask and the other is a crying one. You can and include two people instead of the masks for your tattoo.

Religious tattoos in Chicano style of tattooing are pretty popular. Tattoos of virgin Mary, Jesus, or other Catholic things related to a person’s religion look extremely beautiful in Chicano tattoo style. Religious tattoos are done to express people’s faith, love, and trust in God and Chicano tattoos help them express it well. It also works as a reminder if you have lost your faith somehow.

The picture above shows a realistic Chicano tattoo design of Jesus Christ. The tattoo is done with such details that the emotions behind are easy to understand. You can also choose other Catholic or other tattoo designs for your religious tattoo.

One of the most famous tattoo figures people opt for in Chicano style of tattooing is portraits, mostly of women, or of Chicana. Mexican-American women or girls are called Chicana and tattoos of their portraits in many designs are done the most nowadays.

The picture above shows a lettering tattoo done in Chicano font. The tattoo word reads, ‘Familia’, which means ‘Family’ in English, but it can also mean community for a lot of people.

Chicano tattoos have their roots in Mexican-American culture and history. In Mexico, and now in many other parts of the world, one very famous Mexican tattoo design is the Catrina tattoo which is mostly done in celebration of the wonderful Mexican festival, ‘Day of the Dead’.

The picture above is of a full sleeve Catrina tattoo in an alternative design, mainly embodying the Chicano style. There are few added elements in the tattoo, like the Chicano masks, playing cards, a lion, and a rose.

Cross tattoos for men and women are mainly done in order to express the wearer’s faith and love in God. Chicano cross tattoos also symbolize that, but Chicano tattoos of a cross have a history. A cross tattoo with three short dots above it done between two fingers was the mark of the Pachuco gang. Tattoo artists have improved upon this design since then.

The picture above shows a Chicano cross tattoo with the words, ‘Fortis fortuna adiuvat’ wrapped around it. The words are Latin and they mean, ‘Fortune favours the brave’. You can also choose other words that hold dear to you and get the cross tattoo in any part of your body.

Chicano flower tattoos are surprisingly popular. People might like colourful flowers, but they surely love getting Chicano floral tattoos in simple black ink. These tattoos have such a charm to them that they attract people quite easily.

The picture above is of a Chicano flower tattoo where we can see two beautiful lilies with two names written in Chicano fonts. It’s easily understandable that the two lilies represent the two people, Chris and Jamie.

Now that you know what is Chicano tattoo and what it represents. The most classic themes that were common between Chicanos and now everywhere are women, guns, cars, flowers, skulls, or crosses. A car included in a big Chicano tattoo was pretty common to see. The black-and-grey tattoos and realistic tattoos developed from Chicano tattoos. Get to your tattoo artist and get your favorite Chicano design tattooed tattoo.