10 Best Chicago Stars Tattoo Ideas That Will Blow Your Mind! 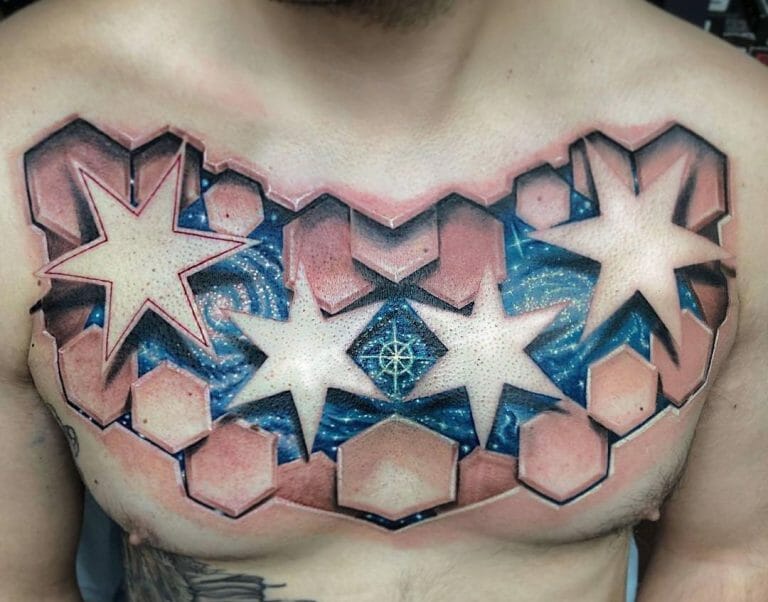 Want to show true patriotism towards your country? No worries these 10 Chicago stars tattoo designs are waiting for you.

You won’t find many cities where you would find people as honored as the citizens of Chicago city.

If you are a citizen of Chicago and thinking of getting Chicago flag ink to be imprinted on your body then these Chicago tattoo designs are bound to be on your bucket list.

But why bother having a Chicago star tattoo when you have a choice of a whole load of other tattoos rolled up your sleeves? Well, the Chicago flag is quite meaningful to those wearing it as it tells us a magnificent story hidden behind it. Therefore you will see a lot of folks out there inking Chicago’s flag tattoo. The history of Chicago’s flag runs back to Wallace Rice when he presented the flag with every stripe and star holding major historical events inside them.

If you are a true Chicago patriot and searching for cool tattoos then these 10 tattoos are specially curated for you.

The Chicago flag has great significance among Chicago’s people. It covers many important aspects of the city as the top blue stripe represents its Lake Michigan and Chicago river north branch, on the other hand, the bottom blue stripe represents the south branch of the Chicago river and great canal. Its three white spaces signify North Side, West Side and South Side.

Spreading blue ink with white spaces and four stars on your bicep would not only display a bold image but also an honor of wearing the Chicago flag that has given you recognition.

This flag tattoo has a classy image and a lot of history hidden behind it. People opt to choose this Chicago flag tattoo to wear it out of pride and honor for their city. So if you want to show the world how proud you are of Chicago, this is the tattoo to go for!

The Chicago flag has four significant stars each representing its own history. The first star symbolizes Fort Dearborn which was inaugurated in remembrance of Henry Dearborn. The second star is the symbolism of the Great Chicago Fire, 300 people lost their lives. The third star stands for World’s Columbian Exposition and finally the fourth star is for century progress exposition.

This chicago red stars tattoo can be of great significance as it covers almost all major events including the great Chicago fire that took place and are a part of history. Getting this Chicago city star flag tattoo inked on your body would show your love towards this windy city in style.

Blue ink mixed with a touch of red color stars mining every little detail of the Chicago flag will surely make you stand out among your other fellow tattooists.

Who is not aware of the famous Chicago bulls? If you are from Chicago then this tattoo is certainly your type. If you are a true sports geek and from Chicago then you must be aware of how popular Chicago is in games. Chicago Bulls have won many basketball championships and the same goes for the Chicago bears. It was proposed that the Chicago flag should have a star for its world-renowned sports.

Chicago bulls and bears t-shirts are also commonly used for their marketing campaign. So why not get a tattoo for this purpose?

If you have a craze of sports and want to show your mates your love for your city then find a refined tattoo artist in your area and go get it, pal!

Chicago flag tattoo with stars having six points shows different revolutions that took place in Chicago. Major ones were the formation of the North American Vexillological Association and the Chicago tribune. The Chicago flag tattoo has a lot more significance hidden into it.

Getting this Six pointed star with vibrant red color on your body would impersonate you as a bold person and make you stand out among others.

Tired of getting old style tattoos then these Illinois ink ideas would surely thrill you. Illinois touches Indiana territory and has a long history covering the visit of French Explorers such as Louis Joliet which proposed its name. Illinois Ink tattoos mixed with Chicago flag tattoos are the best combination one can think of.

So if you are thinking of getting a tattoo out of the ordinary then these Chicago flag tattoos mixed with Illinois skull ideas would suit you the best. The city flag stand out among other flags and imagining a black inked tattoo with Chicago flag in black shading with a skull would surely urge you to get one for yourself.

Want to brag about Chicago tall buildings, great lakes, rivers? Then this tattoo might be the chosen one for you. This tattoo point at the wealth of the city how it stand tall among other cities. If you want your peers to see the greatness of Chicago and want them to explore about the events that took place in this wonder city then this tattoo must be in your consideration

This Chicago flag tattoo accommodating tall buildings is one of the most classy tattoo with a fine taste of modernization. If you want to look cool then this tattoo might be your cup of tea.

What is more heartwarming if you can have a Chicago flag tattoo mixed with your nation’s flag? This tattoo is the pride of a US citizen. The eagle is the symbol of wisdom and bravery and a bird like that holding your flag is surely an end game for you.

A combination of vibrant colors with aesthetically pleasing collaboration of the American flag and Chicago flag is what you want if you are interested in getting a tattoo.

Tired of old school tattoos and looking for some funky style tattoo featuring a Chicago city flag then this game tattoo might just be your style.

This tattoo matches the modern era of gaming where the upper and the bottom blue stripes are represented by toy swords and the stars are made as toy hearts. In games, these little hearts are for lives. If your heart beats for your city and you want to get a tattoo in a unique style then what are you waiting for? Go ink this tattoo on your forearm and create a new norm in your territory.

The great Chicago flag need no colors to define its superiority. Gray and black colors are the primary choices for any type of tattoos. However, you must be thinking how can these two colors cover up the appearance that they are giving to the flag. Well, this tattoo will surely end all your speculations as it shows that this city flag needs no colors to beautify its appearance. By executing its sketching and shading perfectly you can observe the classy outlook this tattoo would give to your body.

A posada skeleton representing the greatest convention city in the world is what we all are opting for. This tattoo is for those setting to step up their tattoos game.

A skeleton wearing a Chicago flag muffler with a bottle of whisky in hand is the new trend in town. Fun loving people with an interest in tattoos should not leave this little posada skeleton having a muffler in his neck! However this tattoo need a fine artist to cover it up on your body as it requires fine hands to execute it.

This list just goes on to show the significance of Chicago city and the Chicago city flag. The importance of this flag shows us why it is a famous tattoo for those living there. Whether you choose this flag as a shape of a bull or in gray color or with a city behind it, this Chicago flag tattoo is an honor for those wearing it. Here are a few other suggestions for you: