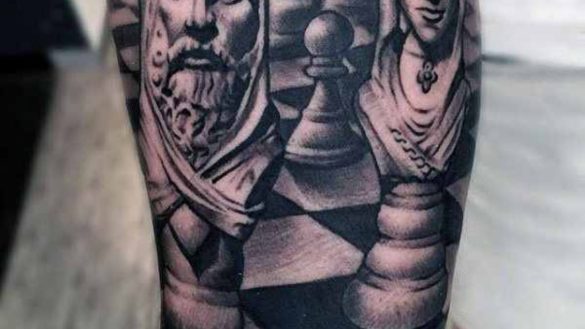 Are you fascinated with the game of chess? Here are some of the best chess piece tattoo designs you might want to get inked with!

Chess is a classic board game played between two players who combine strategy with precise calculation to checkmate the opponent. The six different types of chess pieces used in the game can be transformed into impressive tattoo art with powerful symbolism.

So you might be wondering what does a chess piece tattoo mean? The six chess pieces include the king, queen, bishops, knights, rooks, and pawns. Each of them possesses an important skill and bears a special meaning of its own. The king symbolizes authority and leadership. The entire conflict will come to a halt if the king surrenders. The queen is considered the most important chess figure and personifies the influential female in the game whose advice can sway the king’s decision. The bishop represents the church whose decisions are as impactful as the queen herself and signifies sanctity and jurisdiction. The knight can move a few steps forward by taking a leap. The symbol of a knight can be associated with moving forward in one’s path without turning back. The pawns represent the ones with commitment and those who atones for the protection and well-being of others. Chess is more than just a board game, it is a true representation of the feudal world back in the medieval ages. It is one of the oldest skill games played many centuries ago in India, Persia, and China. The game eventually spread to the western world through Spain where it was popularised as Chess.

You can choose your favourite chess piece that best suits your personality and bears significance in your life. Read to find out more about some amazing chess piece tattoo designs and what they mean!

Realistic Queen Tattoo On A Chess Board

An empowered queen is ruling her kingdom all by herself! The strength of the queen is beautifully illustrated in this meaningful tattoo design. The remarkable detailing of the queen chess piece is done with perfection. The entire design looks incredibly real giving the illusion of being above the skin. Moreover, the edges of the chessboard accentuate the realism of this tattoo art. You can place it on your forearm like the one in the picture.

If you are in search of a king tattoo with a touch of creativity then this is the one for you! The impressive blend of colours enhances the appearanceof the king chess piece. The fluid watercolour effect adopted in this design stands apart from the usual monochromatic inking style of chess tattoos. You can place this vibrant king chess piece tattoo anywhere on your body where it will be easily visible to others.

This appears to be the climax of the game where the pawn strikes off the opponent’s king. The portrayal of the king being broken into pieces with its defeat is absolutely brilliant. The chess pieces are drawn with intense black ink and subtle white shading. You can place this chess piece tattoo on your shoulder, arm or leg that will provide the space to ink the details.

The burning hot flames around the bishop chess piece has created striking imagery in this design. Perhaps, the flames tattoo is symbolic of the intense battle between the kingdoms in the game of chess. The bright sparks of the flame add a contrast to the black bishop chess piece. You can get this tattoo inked along the length of your arms like the one shown in the picture.

Chess Tattoo With A Pulse Line

You should go for this chess tattoo if you feel a rush of emotions while playing the game! The pulse line represents the unpredictability of the game that keeps the players on their toes. The two pawns accompanied by the king at the centre can change the course of the game in no time! The entire design is emboldened in black with vivid detailing.

The traditional knight chess tattoo placed on the neck imparts grace in its truest form. Moreover, the floral detailing adds a certain charm to the entire design. The glint in the eye of the knight is highlighted with white ink. The two knights on each side of the board represent the soldiers who protect the royalty from the enemies. If you consider yourself to be the protector of people then you can choose this knight tattoo for your next ink.

Here, the pawn chess piece is casting a shadow of a king. Well, there is a profound meaning hidden behind this intriguing design. The pawn certainly desires to rise to its true potential and achieve the status of the king. The intricate detailing and the shadow work add depth to this design. This might be a great tattoo idea if you wish to make a bold statement through your chess tattoo design.

The rook resembles a castle in the game of chess. The simplistic design is emboldened with black patterns. You can get this design inked anywhere on your body according to your preference.

Enticing Queen Tattoo With A Rose

The power of the queen combines with the beauty of the rose to create this enticing design. The crown on the queen chess piece is inked with vivid detailing. The crimson red rose tattoo imparts a pop of colour to this design. This can be the ideal queen chess piece design to celebrate womanhood. Even men can sport this queen chess tattoo as a tribute to the women in their life.

The monochromatic king and queen chess tattoos are intricately detailed in black ink. The white fine lines around the edges beautifully highlight the tattoo designs. The king and queen tattoos can be the perfect couple tattoo idea to commemorate a relationship that has survived the test of time. It is their alliance that forms a strong leadership for the kingdom.

Chess pieces bear a huge significance in our society as they did years ago. Although they represent an archaic livelihood that is no longer relevant. However, the power dynamics in society are still the same as it was centuries ago. You can get a classic chess tattoo or combine it with other designs to bring depth to its meaning. Take a look at this curated suggestions list of amazing chess tattoo designs to amp up your style quotient!