10 Best Charon Tattoo Ideas That Will Blow Your Mind! 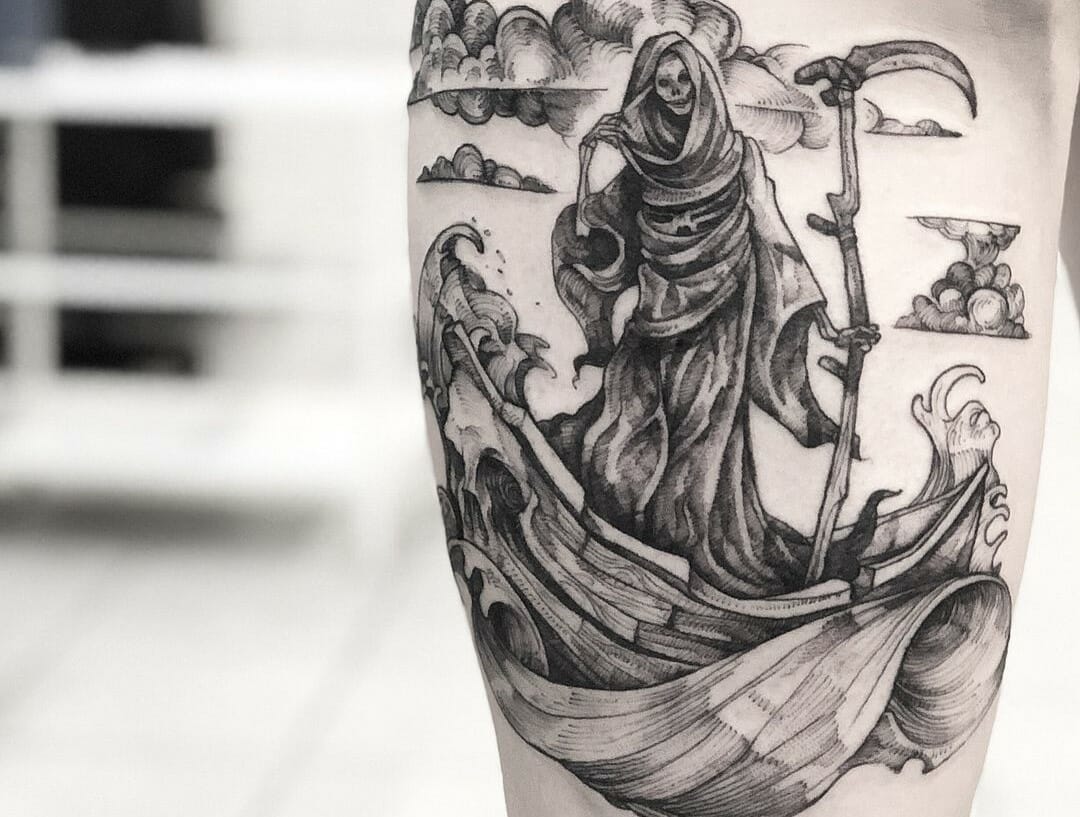 Death calls but at what cost? Perhaps the Ferryman will know. For Charon tattoo ideas that can intimidate anyone, here’s the perfect list for you!

We all know Greek mythology is one of the most fascinating areas of subjects to explore and a tattoo based on one of the Greek characters is an enticing idea. Such a tattoo will definitely be a head-turner along with being a cultural experience.

Hades, the God of Underworld, chose Charon as the Ferryman of The Dead i.e. a dead spirit is guided to the Underworld where they are transported to Hell through River Styx by Charon. In the myths, Charon, the underworld demon is seen as a man wearing a long, dark tunic and a pointed hat carrying a pole. The whole picture of this Ferryman is pretty off-putting to normal human beings. But a Charon ferryman tattoo comes with significant meanings that are related to the spirit of life and death. Often, the Charon is associated with the deadly Reaper too, preferably for the similarity in their role in the myths and how they are perceived. So it is not unusual to see a Reaper tattoo come into the conversation of a Charon art visionary tattoo. And if one thinks this tattoo is too creepy to get inked with, then ask any tattoo studio and they are sure to explain the art of tattooing a visionary tattoo of Charon the Ferryman or that of the Grim Reaper. While both are different, there can be fusion reaper tattoos too.

Being a dark-themed character of Greek mythology, a dark art tattoo is quite the classic form of the infinite experience of a character. We can swear on the River Styx, tattoos like this will automatically give a grim look to your tattoo game.

Neo-Traditional tattoos are a great way of tattooing the Reaper or the Ferryman of Hades. With a lantern in hand and the blindfold, it portrays the Charon tattoo meaning shows how the ferryman treats every soul equally when they are entering the Underworld.

A painting tattoo has the strokes of creating a vivid image with hidden meaning within. Charon, the Ferryman carrying the souls across the River Styx is something that signifies transportation of life to the den of Death; which can be synonymous with one’s personal journey in life.

A tattoo that looks like a scene with immense details put forth to make it appear realistic. The Ferryman and a dark, ghastly soul on the River Styx, meeting eye to eye is quite a relevant art piece. The use of shading gives it a grim touch making it look amazing.

This is the blend of the Grim Reaper and Charon – a great mix. Thereby, a figure of Charon with the face of the deadly Reaper in the dark tunic of the Ferryman holding the pole is the classic. These tattoos are interesting in the way they bridge the gap between different cultural aspects. It’s a great symbol of a bond between mythical stories too.

Samurais were honourable warriors of Japan, but they were also related to the famous act of committing seppuku – suicide. Combining them with the tattoo of Charon, who is loyal to his service to Lord Hades, give this idea an innovative touch

To appeal to one’s liking, a piece of art does not have necessarily have to be an exact tattoo of a caron. Some tattoos can have different elements to indicate a tattoo idea. So to pour some gothic fun into the mix, a mythical tattoo like this is always a unique idea to go for. The elements used here like a human face, a skull and the idea of a river gives it a unique touch that brings about an idea of death and of Charon taking the soul away.

Very grim and yet traditional in nature, the fearsome Reaper in its grey theme brings about everything that the concept of death stands for. So a reaper in this shade is something that can accentuate one’s brave-heartedness in one vision. The skeletal and the dark stare of naked eye-sockets can be really haunting but on the whole, it is a classic way to make the Ferryman stand out.

For a more gothic fusion, combining a mythical character that is the Ferryman of Death with the plague doctor can be a great idea. The Black Death took many lives and it is a given fact, the Plague doctor has been considered as a symbol of death. So, this tattoo can be a quite a twist to the concept of a Charon tattoo.

Amidst all the gloom and dark goth, a bit of pop in colour will not only brighten up the image but will accentuate the piece of art too.

Best suited for a Charon forearm tattoo or Charon arm tattoo, with a pop of some radiant shade perhaps in the eyes or the pole also bears the potential to make it more creepy and daunting which is frankly, an added advantage.

A tattoo that symbolises Death is something that usually does not appeal to one’s collective consciousness easily but considering the varied symbolic meanings of Greek mythology and the infinite experience it comes with, inking a Charon or the Grim Reaper is a classic choice. But most importantly, it is important to find a tattoo artist who can make the one getting the tattoo feel comfortable with the tattoo and also have the skill to bring out the best tattoo with a gothic element in it. The Gothic element can help to make the tattoo pop out and give the Charon the ferryman tattoo a unique touch

For more Charon art visionary tattoo ideas, one can refer to these tattoos –

– Reaper Being Ferryman On A Moonlit Night