10 Best Chalino Sanchez Tattoo Ideas That Will Blow Your Mind! 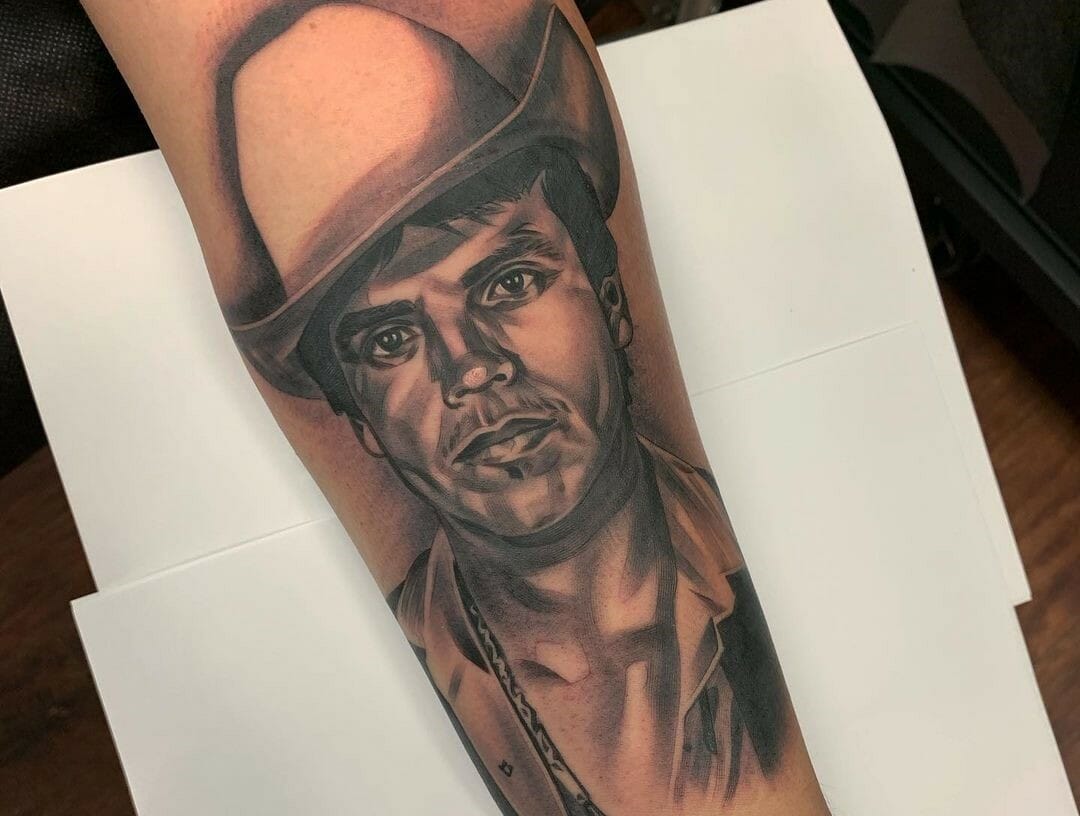 You should definitely consider these Chalino Sanchez tattoo designs as intricate and beautiful as his lovely songs!

Chalino Sanchez’s songs will forever hold a place in our hearts.

Chalino Sánchez was a Mexican singer and musician, with the official name of Rosalino Sánchez Félix. He specialised in regional Mexican and corrido music.

Nobody really comes close to him as one of the most significant artists in the country of Mexico over the last quarter-century. Everybody attempts to imitate Chalino’s swagger, his gruff voice, as well as the way he wore his Stetson in modern-day regional Mexican music, but nobody really succeeds. Adán Chalino Sánchez, Chalino’s son, was born on April 14, 1984, and was also a regional Mexican singer.

While we say muchas gracias to the singer and his songs, let us take a look at some tattoo ideas on him:

This is a simple portrait style tattoo of Chalino with some symbols like snowflakes and flowers around him. One of his most famous songs, Nieves De Enero, is written under him as well. It means January Snow, and it is a very beautiful song that represents his vibe very well. The snowflake around him stands for the same as well. This is a picture that shows the meaning and symbolism of the song very well as a Chalino Sanchez portrait that has a very nice picture of him, along with symbols related to his song.

This is a very simple, detailed and realistic Chalino tattoo that will look amazing on your arm or leg. His face is shown in a very beautiful and shaded manner. The depth of the tattoo is also a sign of the intensity that Chalino has in his songs. This can be further customised with Chalino Sanchez quotes under the portrait tattoo. The shading does continue all around the tattoo, and it is a very beautiful picture to get if you like Chalino or his songs.

This is a more detailed tattoo that showcases Chalino holding a gun and looking very cool. There are also some playing cards much below him, and the two figures get blended in very well. If you like a Chalino Sanchez cassette, you should definitely consider getting a tattoo like this. The beautiful detailing around the tattoo, including the designs on his shirt and the jewellery that he is wearing, is also remarkable. You can also modify and customise the tattoo with some Chalino Sanchez quotes as well. As a music don, Chalino is certainly a great figure. Having a beautiful tattoo like this to respect him is a great idea.

This is one of those Chalino Sanchez portraits that are truly marvellous due to their detailing. Chalino has a very good looking cowboy hat, and his clothes have been drawn in great detail. He looks pensive, and he is holding a gun in his hand. This is a Chalino Sanchez drawing that is really great due to its amazing details. As the popular phrase says, ‘poco con la práctica’, with some practice, one can truly hone their craft. This is true of art such as singing as well, and Chalino has proved that with his wonderful art and music. A tattoo like this is a great homage to a great artist like him.

The best and most known talent that Chalino has is obviously singing, and this is a really great tattoo that shows him in his natural element. As a pioneer in the Mexican music industry, a tattoo of him singing is a wonderful idea to get. If you want any Chalino Sanchez wallpapers, you should consider designs like this. If you are a fan of cassette de Chalino Sanchez, you would like this picture. The detailing in the Chalino tattoo and his realistic features, along with the emotion in his face, really makes this tattoo stand out. If there are any Chalino Sanchez quotes that you really like, you can customise the tattoo with it.

This is a more simple tattoo of Chalino, and it shows him holding his face in his hands in a serious manner. He is smiling slightly, and the peaceful expression on his face will surely put you at ease as well. The soft accentuation of his features is also a very beautiful aspect of this tattoo. This is a great Chalino Sanchez wallpaper idea as well. If you like aesthetics like Chalino’s songs or Sam Flores artwork, this is a great tattoo idea for you. As the music world’s don, Chalino should certainly be appreciated for the beauty that he has contributed to the industry. Also, if you really like any Chalino Sanchez quotes, you can customise the tattoo with it.

This is a darker Chalino tattoo, and this is also one of those tattoos that will look great customised with your favourite Chalino Sanchez quotes. It shows Chalino as he is burning, and you can see how the flames are slowly eating him alive. Under him, there are also some playing cards. You can see the stress of the fire in his skin, as it does continue to look sallow and sad. This is a very nice Chalino Sanchez poster picture as well.

This tattoo shows Chalino looking very sombre and serious as he holds a gun in his hand. This picture shows a more serious side to him, and it is a very good representation of his character and music. If you continue the line of the design, you can see how detailed and intricate this portrait is. The gun in his hand is a sign of more dangerous things, and this does continue for the serious look on his face too.

This is a very beautiful arm tattoo of Chalino. It is very portrait-like, and the seriousness of his face is a sign of the vibe of the picture. The way the background does continue around him also indicates the seriousness of the portrait. Usually, Chalino is shown with a smile always, but this is a more serious image of him. This is a sign that there are not only positive things in one’s life.

This is one of the most intricate tattoos you will find. It shows Chalino and many snowflakes around him. There are burning flames around him and money under him as well. The snowflakes are a sign of one of his songs, and the detailing in the tattoo is really amazing. This is one of the best tattoos you can get if you like Chalino or his songs. The detailing and the intricacy of the tattoo truly make it stand out.

Here are some more of Chalino Sanchez’s tattoos based on popularity and Instagram analyzer tools: