10 Best Cernunnos Tattoo Ideas That Will Blow Your Mind! 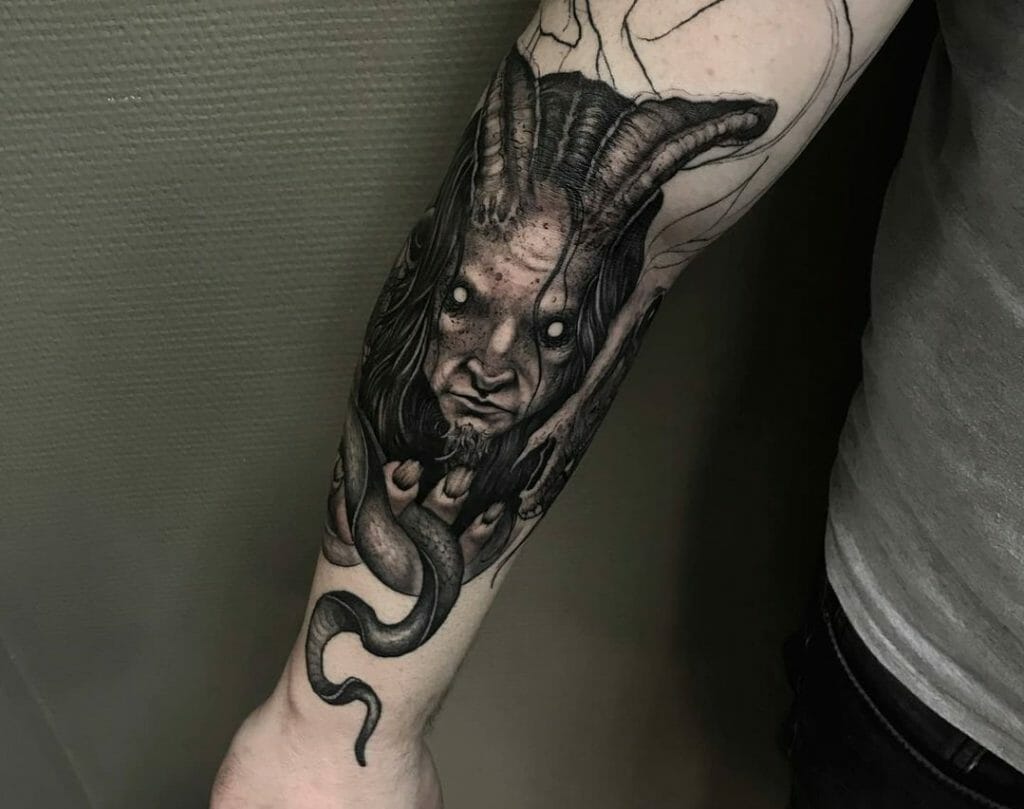 There is a lot of power and strength behind Cernunnos tattoos.

Cernunnos, or the Horned One, is a strong and ancient Celtic God who is widely revered as the “lord of wild things”. Cernunnos was known by several names in different regions of the Celtic realm, but his characteristics remained unchanged.

Cernunnos was a Celtic deity who was associated with earth, vegetation, and wildlife, as well as fertility. In Celtic art, he is typically represented with deer antlers or horns and a torc around his neck. If you’re searching for an artistic approach to convey your confidence and complete potential to contribute to your community, the Horned God tattoo may be the ticket you are looking for.

Cernunnos is sometimes shown with a bag brimming with gold coins, a sign of wealth, power, and knowledge. The generous deity was supposed to give away his wealth and prosperity to those who deserved it. The snake symbolism was cryptic and confused for the ancient Celts.

Cernunnos was predominantly revered in Britain. However, there are indications of this religion in Ireland and Scotland as well. He was often depicted in Christian imagery and medieval texts as a sign of the Antichrist. Because of his enormous pagan influence, the Christian church was vehemently hostile to him.

So check out these amazing Cernunnos tattoo styles!

This is a very intricate and detailed tattoo that depicts the wolves of the Horned God. This Cernunnos design features the famed wolves of the Celtic God, on the shoulder and on the wrist. All around the animal are many beautiful and meaningful Celtic symbols. This is an art style that is symbolic of power and strength. The animals and symbols depicted are intertwined with each other and represent the unique balance that exists in nature.

This is another majestic and detailed tattoo that shows the serene face of the Horned God. The Celtic God has a very peaceful and serious face, and his horns are very long and powerful. The artists have also shown a snake under his face. Snakes, stags, and more creatures are very often shown along with Cernunnos. The animals are thought to have many meanings in association with this God.

This is a simpler yet beautiful tattoo that shows the Horned God in a minimalistic style. We can see the God in shaman clothes, holding a snake and a circular ring. A Celtic Cernunnos tattoo is a great idea if you are interested in Celtic symbolism and mythology. They are often of the theme of balance and strength. The linear Celtic style is very beautiful, and it represents hope and the sensory perception associated with peace.

If you are looking for a Cernunnos tattoo that is a little different and stands out, this design is perfect for you. It depicts the calm face of this God, as many snakes crawl toward him from below. Under the snakes, we can see abstract depictions of a forest. This is one of those very primal Cernunnos tattoo designs that you should consider getting if you think Cernunnos and Celtic myths are fascinating.

This is a simpler yet very intricate design. It shows the mask of Cernunnos, and his horns are drawn in great detail and power. There is a star above it symbolising the light present in the world. The design is gloomy yet beautiful, and its style almost has a pagan feel to it. One interesting aspect to note about this tattoo is the eerie look that the eyes of the mask have. The small leaves around the tattoo give it a deep connection with nature and the world as well.

This is a great tattoo idea for your arm. It depicts Cernunnos looking content, surrounded by the natural world. With a theme of peace, the Celtic God is shown in a very calm and serene background. The rest of the design features small drawings of leaves. This is symbolic of the fact that the Celtic God is very often associated with health and nature. If you are looking for beautiful God tattoo ideas or a specific Cernunnos back tattoo, this is a great design you should consider.

If you like pagan art and style, this tattoo will be a great fit for you. It shows Cernunnos in a more creepy and darker setting. There is a mystical swirling symbol above him, depicting the change in life and seasons. There is a horned snake in place of his arm and some foreboding branches underneath him. The vibe of the design makes it stand out. This is an art style that has a number of meanings. Cernunnos was widely worshipped in Britain as well as Scotland and Ireland, and you can often find many designs and tributes to God in these countries.

Despite his many calm forms, Cernunnos can also be very powerful and inspire fear in all those who behold him. This is a perfect example, as we see the Horned God in a very dark and powerful setting. His horns are very large, and there are scary-looking snakes under Him. He is holding them and looks very fierce. Sometimes a linear Celtic circle design is also added as a backdrop for tattoos like this. This God symbol tattoo is symbolic of all the great power He holds.

This is a very beautiful Cernunnos tattoo that depicts Him in a very serene and calm way. There are many small symbols around him depicting nature. This is very symbolic of the great connection he has with the natural world. He is holding a small ball of light in between his hands, which can have many meanings of light and life. The long and elaborate horns make this one of the best Cernunnos stag tattoos to get. This is a very detailed and beautiful tattoo design that many artists might recommend.

This design is very similar to the shaman tattoo and depicts the Horned God Cernunnos in a very calm position. He appears to be meditating and has a snake and a circular ring in his hand. If you want a tattoo idea that represents peace and calmness, this is a great idea you can consider. This is one of those God tattoo designs that many Cernunnos followers might love. The rest of the tattoo is done with very dark ink, making it seem very serious and intense.

If you are looking for more Cernunnos tattoo ideas and more information, here are some: