10 Best Castlevania Tattoo Ideas That Will Blow Your Mind! 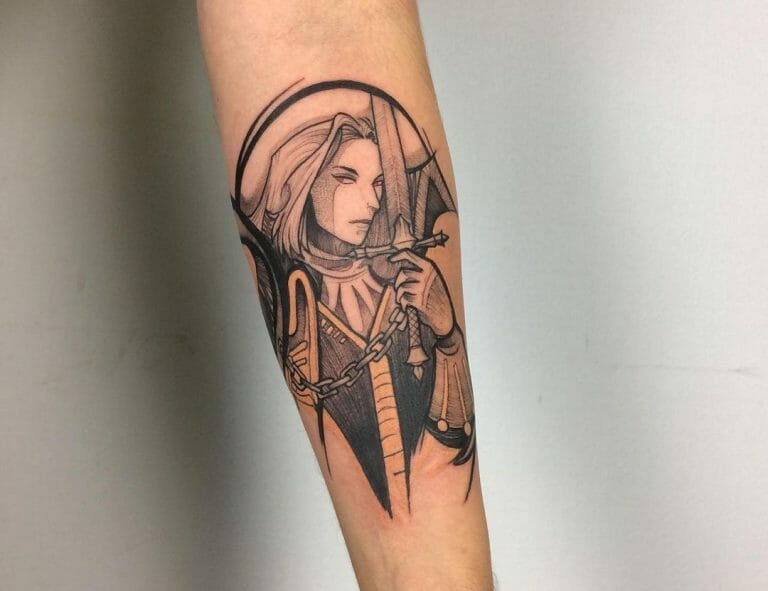 If you are on the hunt for a bloody cool Castlevania tattoo that is bound to turn heads, look at this list of the best tattoos specially curated for you!

Castlevania is known to be one of the most popular adult anime-inspired dark fantasy series which was originally produced by Frederator Studios and streamed on Netflix.

Although American, it was based on a popular video game series released by the Japanese company Konami. It garnered massive popularity amongst fans of both anime and animated series because of its solid plot, as well as its mind-blowing and gory graphics.

Because of the commercial success and positive reviews that it had received from fans, anime tattoo enthusiasts and artists who wanted Castlevania tattoos had probably found a hard time choosing which character to choose for their themed tattoo. From Vlad Tepes and Lisa Tepes to Trevor Belmont, Sypha Belnades and most importantly, Alucard, Castlevania tattoos became a favourite in the list of top anime tattoos.

The series is not just for fans of anime and Japanese anime culture, but also for vampire lovers and fans of all things vampire-related. This is the reason for their great popularity because it ranked considerably high in the Netflix streaming platform. The plot focused on the main heroes Trevor Belmont, Sypha and Alucard defending Wallachia from a revenge-driven Dracula or Vlad Tepes and his bloodthirsty minions.

A good tattoo inspiration makes for an epic tattoo. If you are looking for one of the most epic Castlevania tattoos of all time, this is the one for you.

Partial coloured tattoos really draw a lot of attention because of the highlighted colours. This tattoo gives off a similar epic vibe because Alucard is one of the most popular characters in Castlevania.

Dracula is hailed as one of the most popular fictional villains of all time and Castlevania has made this character all the more popular and epic.

Dracula tattoos have been a rage amongst tattoo artists and vampire enthusiasts and in general as well because of the fame that this character has garnered all around the world. Castlevania’s Vlad Tepesis the titular villain of the series and fans have wanted a unique tattoo of this anime-style rendition of Dracula. This tattoo screams not only Castlevania but also creative art. If you want this particular tattoo, it is wise to select one of the best artists that you know of.

Nobody can deny how much of an impact the character of Alucard had made on young people’s hearts.

He is not only one of the strongest characters, but his enigmatic nature and moralistic virtues despite being a vampire are what made him loved universally. This black and white tattoo is an example of a great tattoo that is ideal for the arms or calf muscles.

Lisa Tepes’ death has been the major plot triggers in the entire series. It was Lisa’s murder that had provoked Dracula’s revenge and bloodlust.

This tattoo has replicated that brutal scene to perfection. It is partially coloured to bring out the bloodstains which is the most significant element of the entire series. If you are a major fan of Vlad Tepes, you cannot think of a tattoo without Lisa Tepes. This tattoo is a perfect choice.

You can never say no to Alucard tattoos if you are a fan of Castlevania. Alucard’s design is a loved one amongst tattoo artists and enthusiasts as well.

His character design is as attractive as his personality. Partial colours have been a rage amongst tattoo lovers. If you want to get a similar design of Alucard inked on you, you should definitely go for this design.

Trevor Belmont and Sypha is undoubtedly a classic pair of a vampire hunter and a witch along with Alucard who had aided them considerably in their quest to slay Dracula.

Sypha is a spunky witch and is perfectly paired with Trevor. Together along with their powers combined, they have remained unbeatable. This tattoo is a perfect example of the bond this vampire slaying pair shares. You can get it as a couple tattoo as well.

Most talented tattoo artists will agree that this is one of the best tattoos of Dracula and Lisa.

It has captured the essence of the entire anime in one frame and is a great choice if you’re opting for a tattoo sleeve and need elements to add to it and care should be taken about where to get a tattoo sleeve from because they require precise hands.

Alucard is a well-loved character in the Castlevania series not because of his looks but also his moralistic views which caused him to plan the murder of his own father himself. This tattoo is a common design of a character which in this case is that of Alucard. Fans who want a minimalistic tattoo may choose this design of Alucard or any other character they want. The grapevine design makes the tattoo all the more regal and appealing and adds more dimension and if you are a fan of Alucard, you can opt for this design on your hand.

Trevor Belmont has been one of the most-loved heroes in Castlevania, not just in the anime series but also in the videogames. His character design and personality has warmed the hearts of most fans, and his strength and valour have made him a favourite. This tattoo perfectly captures the young Belmont in all his glory with his favourite weapon, the Morningstar all fired up and ready to slay the king of vampires, Vlad Tepes.

They say to save the best for the last and one cannot deny that this is one of the best tattoos that screams Castlevania in all of its bloody glory. It has captured the perfect horrific essence of the castle of Dracula along with Dracula’s silhouette lining the entire artwork.

Artists who love anime have been looking for a good Castlevania tattoo inspiration all round the world from various other tattoo and anime artists.

These Castlevania tattoos additionally include Dracula tattoos, vampire moon tattoos, Castlevania tattoo flash. Take care to choose a tattoo with good reviews because many might misunderstand the concept of the tattoo of your choice.