10 Best Buffalo Tattoo Ideas You’ll Have To See To Believe! 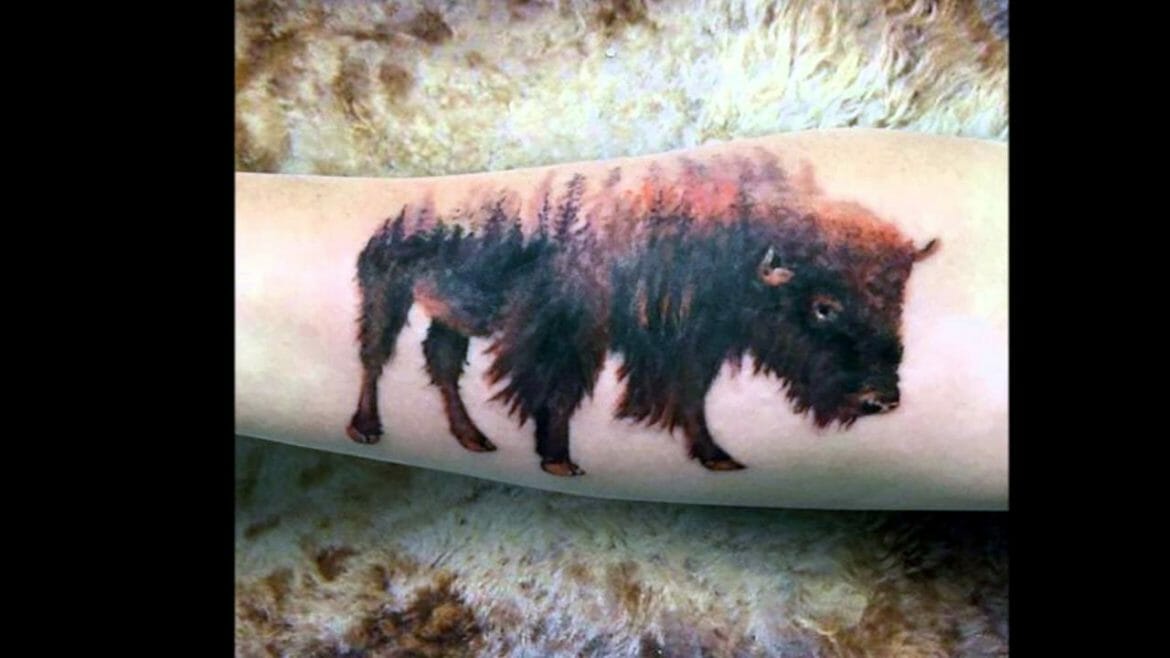 Are you in search of a tattoo that is stylish, realistic, and yet rooted in traditions and cultures? Then these buffalo tattoos are what you have been looking for.

Animals are a common and recurring motif in the tattoo world.

Wild animals such as lions, wolves, and wild cats are probably the most common choices for tattoos. However, domestic and farm animals, such as buffalos and goats, do not lag behind.

The animal tattoo is mostly chosen according to the attributes usually attached to the animal. The buffalo tattoo draws its inspiration from the ancient livestock of the Plains Indians. Buffalos were the main force behind the economy of this tribe providing food and clothing as well as means of barter.

The buffalo is a popular choice of tattoo idea worldwide with several alterations in the designs or the position of the animal. Professional tattoo artists around the globe have come up with unique approaches to make the quality of these tattoos better and more premium. Here is a specially curated list of buffalo tattoo designs you can choose from according to your personality.

The Traditional Buffalo Tattoo Of Strength

Visualise the dread and reverence the early settler of North America and the Native Indian tribes had felt when they gazed upon these huge and elegant beasts grazing the plains. Slowly, they were able to tame these creatures and use them to their advantage. The buffalo became the source of food, milk and meat, as well as cheap labour for them. The animals slowly became an indispensable element in many religious rituals and traditional festivals throughout parts of Indian and Asia. In Hindu culture, the buffalo is portrayed as the ride of Yama, the God of Death. The buffalo tattoo symbolises strength, abundance, resilience, and power. If you want to stay close to your cultural roots, this tattoo is designed for you.

The Buffalo Skull Tattoo As A Homage To Native American Culture

The buffalo skull is considered auspicious by the Native Americans. Many of them still hang or place buffalo skulls in their homes as it is believed to usher in prosperity and good luck. The skulls are considered sacred in the Native American culture and signify respect for life on a whole. The presence of the skull also adds a gothic twist to the tattoo as a whole and coupled with the blossoming flower expresses love for the environment in general. If you are wishing to pay homage to your Native American roots or are a nature-lover, then this tattoo is the one for you.

The Buffalo Outline Tattoo For The First-Timers

A complete buffalo tattoo can be quite a tough tattoo for those who are getting inked for the first time. Apart from the time and pain it follows, this can be quite a commitment for the first-timers. So if you want to get a tattoo that signifies strength and as well as close to your native roots, this cool tattoo depicting the outline of a buffalo head is the perfect design for you to flaunt to your buddies. The tattoo resembles a sketch of the buffalo head and is a piece of art that will add a premium look to your personal style.

The White Buffalo is considered to be pious and revered in many cultures, especially by the Lakota Indians of the North American Central Plains. According to the folklore prevalent in this tribe, the figure of spirituality or the central deity of the Lakota people, the sacred White Buffalo Calf Woman blessed them with the wisdom of the Universe and bestowed the knowledge of Agriculture before leaving. It is also widely believed he gifted the tribe with the Sacred Pipe, and numerous Native Americans celebrate this sacred ceremony to this day. Also, the White Buffalo is an extremely rare creature and it requires a stroke of exceptional luck to spot one. This tattoo design symbolises wisdom, spirituality, and harmony, and it is considered a token of prosperity to spot one of these rare animals in Nature.

The Buffalo Bill Tattoo For ‘The Silence of the Lambs’ Fans

How would you like a tattoo which has both a Biblical significance and can be found in the cult classic film ‘The Silence of the Lambs’? Well, quite hard to connect the dots between the Holy book and a film on serial killers, isn’t it? Fret not, we are here to help. Buffalo Bill was the main antagonist in the film ‘The Silence of the Lambs’ as well as Thomas Harris’ novel of the same name on which the movie was based. He was an infamous serial killer who murdered overweight women and skinned them in order to make a suit for him. If you watched the film closely, you will spot Buffalo Bill’s tattoo on his chest which was a bloody rib. There are a couple of fan theories regarding what the tattoo signifies. One portion of the fandom argues that it represents where Jesus was stabbed by the Lance of Longinus, while the more well-received theory is that it signifies Buffalo Bill wish to be transgender. Just like in the Bible, Adam gave Eve his rib, the infamous killer got that tattoo to embrace his feminine side when refused for a reassignment surgery by several hospitals. If you are a fan of the cult classic movie (who isn’t?) or just another believer, you can get this tattoo anyhow.

The Water Buffalo Tattoo With Frog

The buffalo signifies strength, power, and freedom. In addition, the water buffalo has another significance in the Hindu myth and culture. The Hindu God of Death, Yama, is always depicted as riding a water buffalo. On the other hand, the frog also has a variety of roles in different cultures, from the ancient Egyptians, Mesopotamians to the Romans and Greeks. While the former civilisations associated the frog with fertility and abundance, the Greeks and Romans connected it with harmony also. The frog even features in a number of folklore and fairy tales, Aesop’s fables, and even in recent pop culture (how can we forget Kermit the Frog?). Hence, this buffalo tattoo combined with the frog can be a unique addition to your body art.

The Buffalo Sketch Tattoo On Back

If you are a veteran who is not afraid to add large scale, highly detailed tattoos on your body, then you can definitely go for this Buffalo Sketch tattoo. It is not just a tattoo, but with its masterful design, minute detailing, and wonderful use of technique, it is more of art on your skin. Before you go for this one, make sure the tattoo artist is a trained professional as it will need a lot of time, commitment, and investment to get it right. But it is worth it once you have it done as people will surely be not able to get their eyes off your back.

The Comic Book Themed Buffalo Tattoo For The Comic Geeks

Do you find yourself immersed in comic books all day and quoting out of them while having a conversation with anyone? Do you know more about the different comic universes than the present one you live in? Do you fancy having superpowers like your favourite comic superhero? If the answers to all the above are affirmative, we have great news for you. This comic book themed buffalo tattoo is dope with that ray of lightning striking the forehead of the buffalo along with the arrow. it will definitely also break the myth that geeks do not have a sense of fashion.

The Minotaur Buffalo Tattoo for The ‘Critical Role’ Fans

Every television series has fans out there who worship a few characters or elements their favourite series has to offer. They are not afraid to take that extra step and get their beloved character inked. Well, if you are a fan of the popular American series ‘Critical Role’, then this one is for you. The fantasy show features some gigantic monstrous bipedal creatures called Minotaurs. They share the physical characteristics of both a great buffalo and a humanoid. Get this one and serve as a bodyguard for the Ruby of the Sea.

The Northern Lights, also known as Aurora Borealis, is a remarkably beautiful natural phenomenon. Created from a collision between the electrically charged particles from the Sun that enter the Earth’s atmosphere, the night sky lightens up in different hues of blue, green, violet, and pink. Imagine this fascinating celestial experience within the shape of a buffalo. This tattoo is made with a special type of ink that will illuminate in the dark. How cool is that! Better get your hand on this (or this on your hand!) before going to Norway or some other place to experience the Northern Lights next time.

The buffalo tattoo is a fine choice to get yourself inked with tattoo artists coming up with innovative art concepts every year to lend the tattoos a more premium look and make them more stylish. However, these tattoos may prove costly depending on the design, tattoo shops, or the experience of the artists. Search for tattoo shops in less posh areas of your city for a relatively lesser cost without compromising on the quality. Make sure you sign up for the services of a trained artist, research the type and quality of tattoo design you desire and whether it goes with your personality. Best not to go by the hot trends and discuss the tattoo you are getting with artist friends or the tattoo artists you are availing.