101 Best Brother Tattoo Ideas That Will Blow Your Mind! 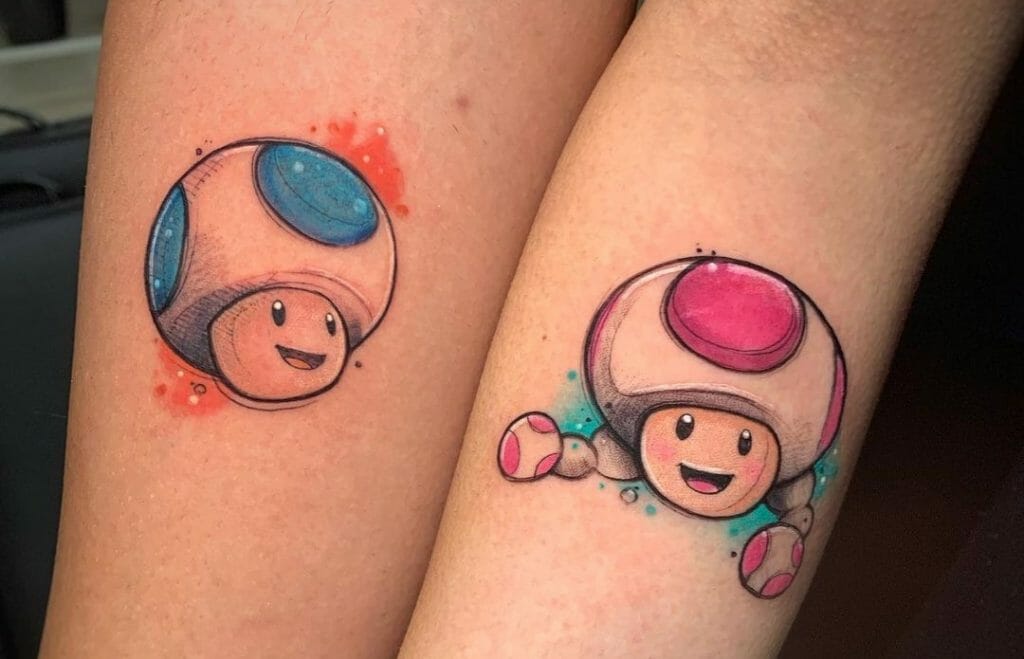 Looking for a tattoo to immortalise your bond with your brother? Search no more. We have got you covered with the best brother tattoos you must see!

Brothers or brother and sister tattoos are quite common among siblings who are inseparable.

Brother tattoos come in different shapes, sizes and colours. And each one of them is beautiful in their own special way for obvious reasons.

Being a brother or having a brother is a heartwarming feeling that everyone should experience. Because who does not need a support system in form of a human who would be accepting and be there through thick and thin? And it has been proven that people who have grown up with a sibling by their sides are less likely to develop depression. The sibling bond that brothers and sisters share is usually the oldest, most deep-rooted and the best one in the whole world. It is a bond consisting of love, trust, and warmth. It is also a perfect blend of affection and irritation. But no matter how annoying your sibling is and no matter how much they fight with you, the beautiful bond you share with them stays for life, just like a tattoo would. One can get a brother tattoo for various reasons. For example, two brothers can get a pair of complementary or matching tattoos. A brother with a sister or brother can get a brother tattoo to flaunt their love for brotherhood. A sister can get a brother tattoo to show her love for her brother(s). Even those who are not related by blood but are nothing less than brothers can get a brother tattoo. And there is probably no better way to celebrate brotherhood than getting a tattoo that would last forever, or at least till the wearer of the tattoo is alive. A brother tattoo can contain a simple design, matching symbols or something that refers to a common interest of the owners of the tattoo. It can be a script tattoo featuring names, birth dates or some other important thing as well. A brother tattoo can also consist of something that reminds the bearer of their childhood spent with their sister or brother. Here are some brother tattoo ideas that would speak a thousand words for you:

Can’t skip the bond of Sasuke and Itachi while talking about brother tattoos, can we? This tattoo features the scene when Sasuke decides to destroy the village that made Itachi suffer and Itachi shows the downfall of the Uchiha clan to Sasuke using his Sharingan. And Itachi then says his final words to Sasuke: “No matter what happens to you from here on out, I will always love you”. So if you want to flaunt your love for your brother and/or the Uchiha brothers, you wouldn’t regret going for this one.

This tattoo features a pair of siblings flying using the help of a balloon. The brother in this tattoo is wearing a cape that basically states “my brother is my hero”. This tattoo portrays the relationship between a sister and her elder brother really well. It shows how a sister has a special place in her heart for her brother. This tattoo would do well as an arm or a calf tattoo. And if you find the right artist, we assure you, you will make your brother really happy with this one.

As kids, Mutta and his little brother Hibito, upon seeing a UFO promised to go to Mars and the Moon respectively as astronauts when they grow up. While Hibito did become an astronaut, Mutta could not. But they were always supportive towards each other. And that’s what makes their bond so amazing. If you love the manga and your brother, with some planning prior to the tattooing, some attention from your artist during the inking and some aftercare from your end during the healing process, this tattoo is gonna look dope.

These are three cute wrist tattoos that are made of an amazing, meaningful idea. This is the kind of tattoo brothers and sisters can have without having to worry about the number of siblings. For example, if a family contains six siblings the fifth one will get the 5th/6 tattoo. The best part about this tattoo is that it will cost you the least amount of money and time to get it inked on your skin. And this tattoo is small enough to be tattooed on any part of your body, such as the wrist, neck or ankle.

This tattoo features the backs of two brothers with slingshots holding hands. The boys in the tattoo represent love and warmth. One could spend their life fighting and quarrelling with their brother or sister, but could there be a better friend than a sibling? And this tattoo itself is a constant reminder of one’s childhood spent with their sibling and the innocence associated with it. This tattoo is definitely a good choice, be it as a thigh piece or a chest tattoo. So, go start looking for artists with some expertise to get this inked.

The candies Seita is giving to Setsuko in this artwork are Fruit Drops. Those who have watched Grave of the Fireflies know how important Fruit Drops actually were in the movie. They were Setsuko’s all-time favourite. But when she died, the box of the Fruit Drops was used to store her ashes. Even though this tattoo tells the story of a family destroyed by warfare, it also showcases a brother’s love for his little sister. If you’re a brother of a younger sister, or if you’re a sister of a loving elder brother, go for this one.

Woody and Buzz are a famous bro-duo who are not really related by blood. In fact, they do not even have blood running through their bodies. These two toys belonging to Andy from the Toy Story movies share a bond many live-action movie characters don’t. Even though it was difficult for them to be friends initially, they ended up being best buddies, or in fact, bros. They never thought twice before risking their own lives to save the other one. And if you share a similar bond with someone, this tattoo will be perfect for you.

Cats are supposed to chase and kill rodents, right? Tom & Jerry don’t prove this theory wrong, but they do not prove it right either. Tom might have been Jerry’s arch-nemesis and vice versa, but they were also very fond of each other. They had none but each other at the end of the day. And if not all, most siblings, we believe, are exact copies of this great pair. The shading of this tattoo demands to be treated with good hands. So for this one, you might wanna go to an artist who knows their job well.

In the animated sitcom, The Simpsons, the two oldest siblings, Bart and Lisa are mostly seen fighting. But the show has also shown how dearly they love each other and the affectionate bond they share on many occasions. And aren’t most brothers and sisters like Bart and Lisa? No matter how much they argue and fight, at the end of the day, they share the closest relationship among all the other ones. If you love The Simpsons and relate to these two, go find a skilled artist and get this funny tattoo inked with your sibling.

Brothers Sitting At The Beach Tattoo

This tattoo is a beautiful piece of art showcasing an entire scenery within a small space. It features everything starting from two brothers sitting by the seashore, clouds, birds to grass, land, water and wood fire. This tattoo is an overwhelming artwork that holds up a memory two brothers might have shared as kids. It could also serve as a memorial of a dead brother. Thus, this emblem has many interpretations, depending on who gets this inked on their body. With a bit of money and some patience, one can totally nail this tattoo.

We hope you have wrapped your head around the fact that brother tattoos can come in all forms. But each one of them is derived from a unique tattoo idea. While choosing a tattoo you must be careful about understanding which design defines your relationship with your brother, sibling, or someone like your sibling best. Irrespective of your gender, you can always choose to get a brother tattoo for yourself or share a matching tattoo with your brother or sibling. You could even get a brother memorial tattoo to feel like you are keeping your brother close to yourself all the time. You can always customise a tattoo that goes well with your unique personality. Take suggestions from your artist and decide which tattoo you want to be inked on yourself/yourselves. With the help of the right tattoo artist, anyone can rock a meaningful tattoo representing brotherhood. And if your confusion regarding getting a brother tattoo is persistent, here are some more brother tattoo ideas you might like:

What does a brother tattoo symbolize?

A brother tattoo can symbolize a variety of different values and relationships, but it’s most commonly associated with loyalty, protection, respect, and an unbreakable bond between brothers. A brother tattoo serves as a reminder to honor each other’s commitment no matter what the circumstances. It is also a way for brothers to express their love and appreciation for one another. The brother tattoo is often seen as a tribute to the bond that brothers share, both good times and bad. No matter how far apart they may be, this tattoo serves as a reminder of the special connection they will always have. It can also represent an oath to protect each other even in times of strife.

What are the different designs of brother tattoos?

There are many different designs of brother tattoos, ranging from the traditional to the unique. Some popular choices include matching symbols such as hearts, intertwining arrows, and entwined initials. Other options include quotes or phrases that express your unbreakable bond in a meaningful way. Another popular design is two rings connected by a chain – symbolizing the unbreakable connection between the two brothers. Additionally, some brothers choose to get a tattoo that is representative of their shared interests or hobbies. No matter what design you choose, getting a brother tattoo can be a meaningful way to show your appreciation for one another.

What is the best place to get a brother tattoo?

How much does a brother tattoo cost?

The cost of a brother tattoo can vary depending on the size, complexity, and location of the design. Additionally, certain materials used to create the tattoo might also impact the price. Generally speaking, mostbrother tattoos will cost between $100 – $500 but could be more or less than this depending on the factors mentioned above. It is important to note that some artists may charge extra fees for custom designs, so it’s important to ask any potential artist about their pricing policies. It is also a good idea to shop around and compare prices before making a final decision.

What are the most popular brother tattoo designs?

The most popular brother tattoo designs often feature symbols of loyalty and protection, such as intertwining arrows or two hands clasped together. Other popular choices include matching hearts, a set of initials, or a phrase such as “brothers for life”. Additionally, some brothers choose to get tattoos that reflect interests or hobbies they share.