10 Best Brother And Sister Tattoo Ideas That Will Blow Your Mind! 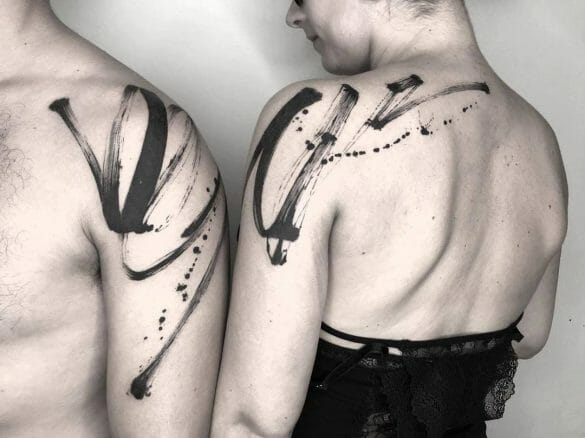 A bond like no other, the brother and the sister tattoo is a cute tattoo and can be inked by anyone who loves their siblings more than anything.

‘Brother and sister’ has been derived from the Old English word sibling which means relative or kingsman.

Now having a sibling is a fascinating thing yet it has some challenges. Sometimes your brother or sister can be so annoying you wish you not have one and again sometimes they become your only safe haven.

Having siblings is like an assurance that no matter what happens there will be always someone for you who will support you in your favour. This unbreakable bond is something beautiful and must always be admired. Sometimes siblings become so close to each other that they don’t even need friends to hang out with or share their problems. They become your guide, protector, and mentor. Now to appreciate and celebrate this beautiful bond many people get brother and sister matching tattoo designs in different places on their body with varied and cute meanings.

The koi fish tattoo design is quite popular and commonly done as sibling tattoos around the world. This tattoo design can be done either in black ink or from multiple ranges of colourful ink available in the parlour. The symbol of koi is a renowned one in Asian culture, particularly in Japan and China. In the tales from the pages of folklore, it is believed that the koi who swam upstream in the Yellow River was transformed into a dragon.

Now generally the koi fish represents strength and willpower and can be done as small tattoos on the ankle or wrist or as medium sizes on the forearm or calves. But when two koi are introduced it represents the duality and balance of the opposing forces of life. It also becomes the symbol of yin and yang, where the brother is the yin and the sister is the yang or vice versa and demonstrates the harmonious balance between the opposites.

These brother and sister tattoo designs come in a variety of forms and ideas as there are an uncountable number of characters to pick from. They can be either done as matching tattoos with similar characters or with different ones. Mostly done with colourful inks and sometimes with black, they can be placed in the different portions of the arms, legs, and back.

This design is not only cute but also takes the owner of the tattoos down memory lane when all siblings use to watch and enjoy episodes of different cartoons. The most popular choice of characters includes Tom and Jerry, Rick and Morty, Micky and Minnie, Timon and Pumba, and many more such wonderful creations. The Tom and Jerry is a particularly very popular tattoo design around the world done by brothers and sisters representing love, respect, friendship, and competition towards each other.

The dot symbol tattoo design is a great way to represent the spirituality in a sibling bond. These tattoos are mostly inked in a minimalistic approach and are particularly done in the same location. Getting this tattoo mostly in black ink on the wrist is a great idea.

The heart tattoo is a quite popular and common design one can find around the world. This tattoo for centuries has been the representative of the special bond shared between loved ones and comes in a variety of designs ranging from anatomical heart to the basic symbol we all know. It can be either inked as a small tattoo or a large one based on the place one decides to get it.

The matching heart tattoos which are done by brothers and sisters reflect the infinite love and adoration they have for each other. The ink choice is mostly black and the different placements for the tattoo to look cool include the wrist, ankle, and shoulder. Not only love but the tattoo also stands for hope and memory. They are mostly done by siblings who are best friends with one another.

The sun and moon tattoo is one of the most simple and aesthetic designs that have been found in literature, visual art, poetry, and many other things since the dawn of human history. Moon is the counterpart of the Sun, just like day and night, darkness and light, male and female and demonstrates the universal concept of merging opposites. The sun is the symbol of masculinity with strength and power while the moon demonstrates calmness and stability which are feminine traits. The relationship between brothers and sisters is greatly represented by this design and is mostly done in matching ink.

This tattoo can be further highly customised according to personal needs and the best places to get inked with this design are portions of the arm, leg, and back. Now, though the sun and moon represent males and females respectively, it is not necessary to get the tattoo in that same fashion. Ultimately it is one of the most beautiful yet elementary designs to show the siblings’ bond in a fantastic way.

The butterfly tattoos can be done as sister tattoos or by a brother and sister and hold deep underlying meaning. This particular design is both popular among the client and the tattoo artist equally for the challenge of its intricate design and vibrant ink used to decorate the butterflies. Minimalistic ones can be inked on the finger of a person but preferred places include the wrist, forearm, calves, and ankle.

The four stages of change from the egg to becoming an adult butterfly hold a significant meaning. The metamorphosis of the butterfly shows how the siblings’ relationship has also gone through different stages of life and still holds a firm shape and unbroken bond. This design can be regarded as one of the best unbreakable bond brother and sister tattoo ideas and also demonstrates the idea of freedom and personal growth.

Regarded as one of the most primitive weapons this tattoo design for brothers and sisters is extremely customisable with varied symbols and can be inked in different styles. The choice of ink is mostly black for this tattoo design and the forearm and calves are the best places to get tattooed in the body for this one.

The first and foremost thing that this tattoo design demonstrates is the struggles and hardships faced and won with extreme valour. This can be done by siblings who had a rough childhood or ones who grew up in poverty and now have triumphed over it and are residing in a period of calm and peace. Since the arrow moves in the forward direction it also symbolically means to move ahead in life with family and friends. They can also be done as matching tattoos only for the sake of fashion as it holds a great historic value and tribal features.

A numerical system is something that everyone has a connection with. From being a lucky number to a special date numbers play a key feature. Now we can see many people with roman numerals tattooed on their bodies and it represents a varied scheme of meanings. The Arabic numerals are not used mostly for tattoos as they are the system that is put to use for our daily purposes.

The choice of ink preference is mostly black and depending on the size of the tattoo they can be done on any portion of the body. When done by siblings they can represent each other’s birth dates, the number of brothers or sisters one has, or some unique dates that are of grave importance.

They are mostly inked in black colour and are done on the wrists, biceps, ankles, and shoulders. Now when done by brothers and sisters, the anchor represents stability in their relationship. It demonstrates the beautiful bond that a brother and sister share and must be protected from any situation by staying firm, calm and tranquil just like a ship in a storm.

The triangle tattoo design is quite popular among siblings and carries a variety of meanings. Within the shape of the triangle, other symbols are included to enhance both the design and the meaning of the tattoo. The preferred places for this tattoo are the forearm, wrist, ankles, back, and shoulder. Now in Greek culture triangle symbolises a doorway to higher wisdom whereas in Norse mythology three interlocking triangles are also known as the Valknut and are said to have protected warriors in the battle. Again if you see it from the angle of Christianity it represents the father, son, and the holy spirit.

The one which is very popular and mostly done by siblings is the one with a vertical line and a circle surrounded by a triangle. This symbol is very much known to the Potterheads and it represents the story of the three brothers and also the three artefacts in Harry Potter namely the Elder Wand, the Resurrection Stone, and the cloak of invisibility. One can get this tattoo both as a fan of Harry Potter and also it serves as a warning not to become extremely greedy.

From protection to enormous love, the brother and sister tattoo design is the best way to celebrate this beautiful bond.

Other tattoo designs based on brother and sister one can try are: