10 Best Broncos Tattoo Ideas That Will Blow Your Mind! 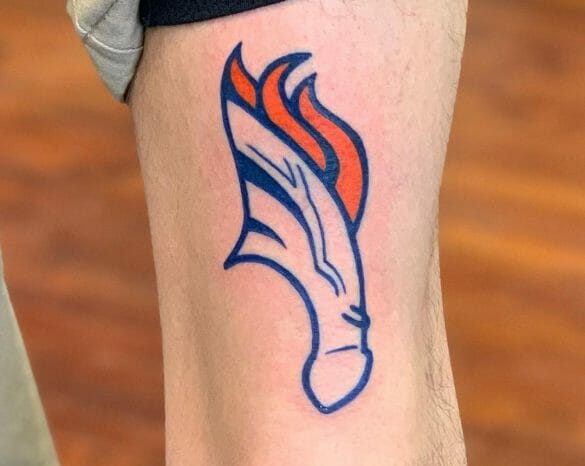 Are you a fan of the American football team Denver Broncos? Take a look at these amazing Broncos tattoo designs that will keep your soccer fever alive!

The Denver Broncos is a legendary football club based in Denver, the capital of Colorado.

The Broncos Logo is a representation of a white stallion with an orange mane. Denver Broncos tattoos are a portrayal of their logo in the iconic blue and orange colour scheme.

The club was founded in the year 1959 with its headquarter in Dove Vally, Colorado. The team plays home games in Empower Field at mile high stadium along with competing in the National Football League for the Super Bowl championship. The team currently has 53 players with Joe Ellis serving as the president of the club. The logo of the club underwent a series of transformations from its initial years and the current one was designed in the year 1997 by the team. It has become one of the most popular trademarks of the club and a fascinating subject for tattoo designs.

You can ink a traditional Broncos Logo or pair it up with other designs to add a unique twist. Here is a list of some innovative Denver Broncos tattoo ideas that might catch your attention!

A white horse sporting the team colours seems to be a spectacular Denver Broncos tattoo idea! This design is a portrayal of the chosen mascot of the club which is a white stallion named Thunder. The intricate shading on the horse has definitely brought it to life. The feathers tied around its harness are painted with blue and orange colours. This design might bring back memories of watching their games at Mile High!

Here, the logo is inked inside the brain region of the human skull. Perhaps, it means that the essence of the football club is always present in the mind of the wearer. The bicoloured logo is inked in bold lines in the centre while the skull is kept simple with crisp detailing in black. This thoughtful Broncos design will be the ideal pick for all the true fans of the club out there!

The 70s logo of Broncos is inked with a modern touch in this unique tattoo art! This design was originally suggested by artist Edwin Taylor who happens to be a supporter of the Denver Broncos. The logo portrays a white stallion exhaling steam on a blue background. The blue backdrop is studded with white diamonds and emboldened with a black outline. The orange flowers on the edges of the frame add to the beauty of the design.

Here, the Denver Broncos logo is detailed with Polynesian tribal art. The tattoo artist has only used black ink to ink the tribal patterns in the entire design. You can also go for a combination of orange and blue ink to fill the details. Each of the patterns carries a distinct meaning of its own according to the Polynesian culture. You can fit this Denver Broncos logo with tribal detailing anywhere on your body.

If you are in search of a traditional Logo of the club then this one should be your top pick! This unique logo is a portrayal of a white horse’s head emboldened in blue ink. The mane of the horse is inked in orange and its eyes are highlighted in the same hue. You can place this fierce design on your arm to display your fondness for the soccer team.

A headgear, worn by soccer players, has the Broncos logo inked on its side. The headgear is inked in a vibrant shade of blue with realistic detailing to enhance its visual appearance. The design of the headgear is inspired by the ones worn by the Broncos players. The word ‘Broncos’ is inked in orange at the bottom of the design and emboldened in blue. You can alter the size of your Denver Broncos headgear tattoo depending on your choice of placement.

A 3d Broncos tattoo design can be a great idea for your next ink! Here, the white stallion is inked with a touch of realism. It seems like the design is placed on top of the skin. This illusion is enhanced by the realistic shading below the logo in blue ink. You can ink this realistic Broncos logo along the length of your arms like the one shown in the picture.

An Eeyore is a fictional character from the Winnie-the-Pooh books who happens to be a stuffed donkey. The reference of an Eeyore is often used in reference to the club when it is underperforming in a particular season. The Eeyore is sporting Von Miller’s jersey with the number 58 highlighted in white. The headgear worn by the Eeyore has the trademark logo of the club inked on its side. You can ink this Denver Broncos Eeyore if you are in search of a quirky design!

The logo of the club is inked with a watercolour effect in this beautiful tattoo design. The logo is drawn with a gradient of orange and blue that fades into each other. The stallion is emboldened in black to create a contrast and acts as the perfect canvas for the design.

The old logo of the club from the 70s is inked with a scenic backdrop in this tattoo design. The galloping stallion is placed inside the alphabet D that stands for ‘Denver’. The mountain range and the blue sky accentuates the aesthetics of this tattoo art.

People often get tattoos of the things they are passionate about and for many it is football! Broncos tattoos are popularised by their fans all across the world! Apart from cheering for the team in the mile-high stadium, you can also ink their logo to extend your support for the club. Here is a list of suggestions for some Denver broncos tattoo designs that will help you pick the right one of your choice!