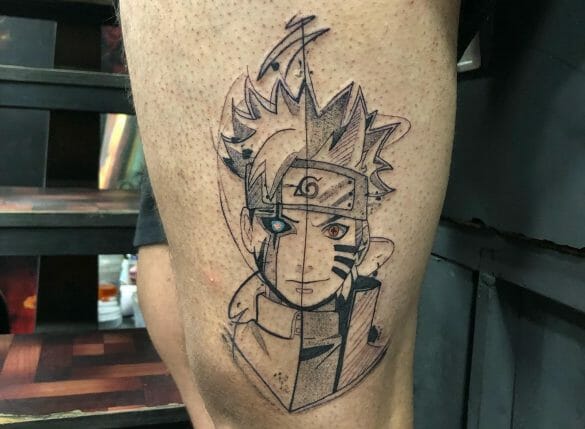 If you’re an Otaku and want to show your love for the anime series Boruto, then here are the ten best Boruto karma seal tattoo ideas you’ll ever find!

If you grew up watching anime, then you must have watched Naruto, and of course, you know that Boruto Uzumaki is his son.

Baruto is overshadowed by his father’s outstanding achievements and wants to overcome that, which of course, is really difficult. But with his new power, the hope has a chance to take the shape of reality.

Boruto is the son of the great ninja war hero Naruto. Boruto was initially shown as a weak character, who takes the help of the scientific yet wicked tools to grab his father’s attention, but unluckily gets caught by his own father and degrades his worth. He was then banned from partaking in the Chunin exam by his father, who is also a Hokage. And then, one day, Boruto Uzumaki finally succeeds in awakening his true ability, which is ‘karma’. It came with a strange yet beautiful mark on Boruto’s body. He found the strange power very intriguing, which had the potential to be powerful enough even without the use of Jutsu. His abilities are far beyond understanding his father, who is an old shinobi. But later, a powerful villain named Jigen comes into the picture and easily defeats Naruto and Sasuke with his ability of the karma seal.

Unlike Boruto, he could control the karma chakra without any difficulty. He also had a strange power on his palm, which could absorb chakra, which is also the reason why chakra-based attacks would never work on him. Well, that is not the limit of his powers, he also has top-notch physical abilities, and he can also summon a pyramid-shaped barb. But let’s not forget his deadliest ability to decrease the life span of anyone with a tap. It was a very unfamiliar power for the old shinobi, and only Jigen knew the mystery behind the karma seal. Jigen had a body of an android, which was created by collecting certain biological data. He came to the scene to find a body suitable for his reincarnation, and Kawaki was the boy with a suitable vessel’s body for Jigen. The host’s body or vessel’s body had a few conditions which must meet if Jigen wanted to take over that body. When Jigen attempts to take over the host’s body, Naruto and Sasuke, with the help of Boruto, stop that from happening. When Jigen dies, all the data about karma seal dies with him except the few who stay with Kawaki.

If you want to carve a stylish Boruto tattoo as a sign of love for the series, then we have the ten best tattoos which you shouldn’t miss out on.

If you are looking for a Boruto tattoo with a karma seal, this is the one for you. This tattoo has neat details of the karma seal’s position on Boruto’s body. The artist has captured a remarkably detailed authentication of the anime as well as manga. A truly perfect war face of Boruto with a beautiful short sword in his right hand has been captured here. Honestly, nothing could be more badass than this tattoo.

If you want to show your complete love for Boruto, then this tattoo is perfect for you.

For the Boruto fans, nothing can grab the spotlight more than a colorful karma seal tattoo of the famous Kawaki. This tattoo reflects the badassness of Kawaki, just like the anime did. This tattoo has a colorful picture of the transformed Kawaki with such details, which are second to none. If you look at this tattoo, then you can see a horn on Kawaki’s head, which has the perfect color, like the karma seal on Kawaki’s hand. The red fire-like thing around Kawaki is his chakra, or we can say the aura, which is also colored perfectly.

If you don’t want to regret choosing the wrong tattoo, then nothing can replace this tattoo for you. And so, this could be a perfect sign to show your passion for Boruto.

An otaku always loves the bond between friendly rivals. And if you are a true Boruto fan, then I am pretty sure you haven’t missed the special rival bond of Boruto and Kawaki. That’s exactly what this particular tattoo reflects without leaving anything behind. At one glance, you can see the thrilling war faces of the two renowned shinobis, Boruto and Kawaki. Boruto is shown like he is doing a sign with his full awakened karma, whereas Kawaki has been portrayed as fierce as he is.

There could be nothing more stunning than the tattoo of these two legends together, so if you want to pitch in, we suggest you go for it.

In animes, the bonding of father and son has always been shown to be special, and Boruto, too, is not an exception. This Boruto and Naruto tattoo is definitely eye-catching. The tattoo is drawn on the hand with half of the face of Boruto with his Karma seal on it and half of Naruto’s sage mode’s face. This tattoo is truly unique because of the similar looks of the father and son. And this tattoo definitely has every minute detail of both the characters. The different eyes of both the characters are also captured very well.

If you want to let the anime fans know that you haven’t forgotten Naruto and still looking over his legacy, then this tattoo with the protagonist from the sequel series is a perfect choice for you.

The most shocking thing that happens in Boruto is when Jigen defeats the two powerful shinobis, Naruto and Sasuke. Undoubtedly, Jigen is the most powerful villain shown so far. This tattoo reflects the true colorful evilness of Jigen. This tattoo is on the side of the neck, which means people can’t ignore this art’s true beauty anymore, nor can your clothes hide it. This tattoo is definitely more beautiful than the manga because it is more realistic. The horns and evil face with blue eyes are simply irresistible.

If you love villains, then this tattoo is so perfect for you because nobody among villains can be more mesmerizing than Jigen.

This tattoo depicts the merge of Boruto and Naruto. The karma seal is from the series Boruto, but Sharingan and Rinnegan are from Naruto. As Naruto and Sasuke are still crucial characters of Boruto, this creative tattoo reminds us of that. Both Rinnegan and Sharingan are perfectly balanced and drawn with the karma tattoo, which totally deserves the word ‘creative’. The color is so well matched, and it will shine on anyone’s hand.

If you still miss Naruto, and that is the reason why you watch Boruto, we would definitely recommend you this tattoo as a perfect reminder.

You have to agree that Kawaki has a different aura than the rest of the characters. This tattoo shows us exactly that, Kawaki’s body with a sword on his back and his stylish cloth with his Karma seal embedded on his hand as well as on his face is drawn here. This tattoo perfectly suits the hand and totally enhances the look.

If you are not a risk-taker and want to carve a tattoo which you don’t want to regret, then this tattoo is perfect for you.

The stunning brotherhood of both the rivals Boruto and Kawaki with their karma seal is drawn here. Only the karma seal portion of both characters is colored, which is the positive side of this tattoo. This half-colored tattoo is just perfect and focuses more on the karma seal.

If you are looking for not so black and white beautiful tattoo, then you definitely have found the perfect match.

This is a tattoo of Kawaki in the manga version. This totally reflects the manga with every detail. The art with its border gives the message that it belongs to manga and manga only.

Manga readers are the kind of fortune-tellers of the anime world. If you, too, are one of them and want people to know how passionate you are about the mangas and animes, then you have found yourself a perfect match.

We are sure you must have found your favorite Boruto’s Karma seal tattoo by now. However, if you still want to keep searching for more tattoo ideas, you might want to check out our recommendations:

What is the Boruto Karma Seal Tattoo?

The Boruto Karma seal tattoo is a special symbol that was given to Naruto Uzumaki by the Otsutsuki Clan. It can be seen on the back of his right hand, and gives him immense power and control over chakra. The design of this tattoo consists of three tomoe (swirls), each representing a different aspect of power. The center tomoe represents Naruto’s chakra, the left tomoe symbolizes the Otsutsuki clan’s power, and the right tomoe is said to signify a connection with Six Paths Sage Mode. When activated, this tattoo gives Naruto superhuman strength, speed and other abilities that are unique to him. It also increases his physical attributes, such as his durability and stamina. This tattoo is considered to be a powerful weapon, allowing Naruto to fight against foes that would normally be too strong for him. It is also a symbol of Naruto’s status as the Seventh Hokage.

How much does the Boruto Karma Seal Tattoo cost?

The cost of getting the Boruto Karma seal tattoo varies depending on the artist. Generally, it will cost anywhere between $200 and $500 USD. The price may also be higher if you choose a more intricate design or get it done in color. However, the cost is worth it when you consider the immense power that comes with the symbol.