10 Best Bone Frog Tattoo Ideas That Will Blow Your Mind! 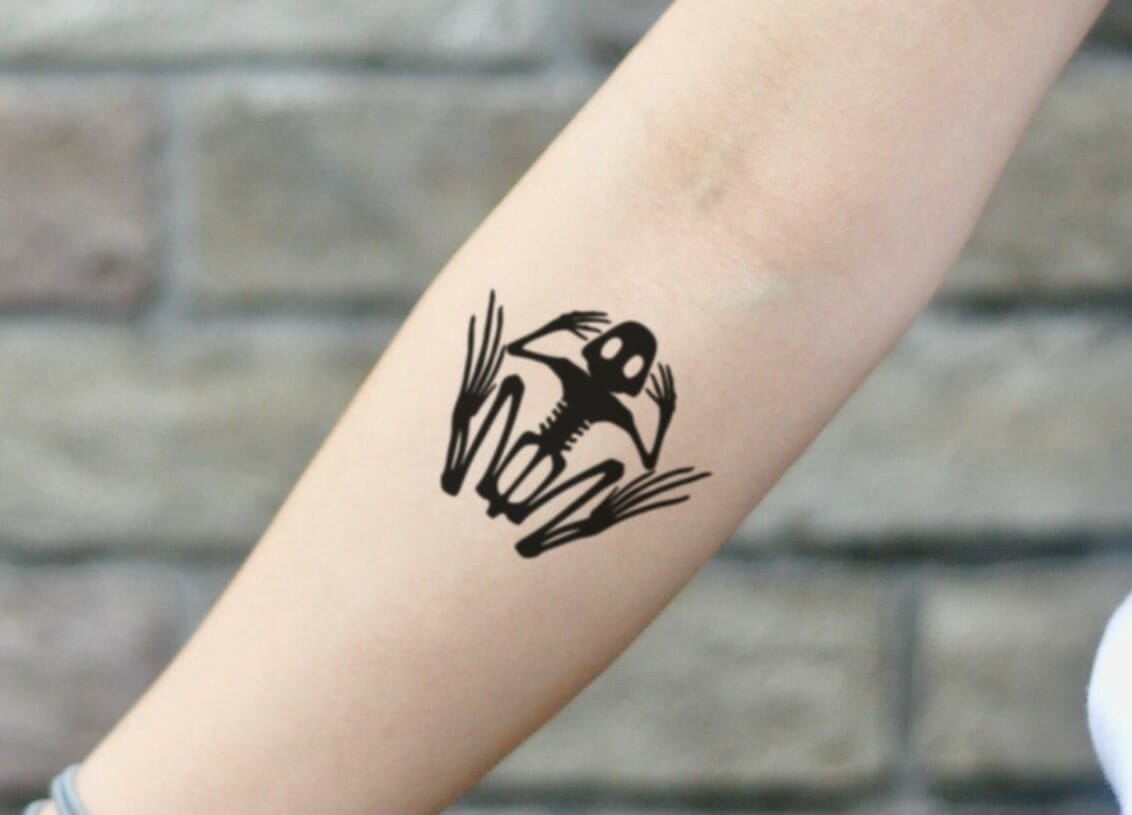 Honour the bravest of the brave. Find the best bone frog tattoos in this list to choose from, curated just for you for your tattoos!

The bonefrog is an iconic symbol of US Navy SEALS to honour any fallen soldier in the line of duty.

The name is derived from the Vietnam-era Navy SEALS, who were called frogmen. These tattoos are a great one to go for.

The Navy SEALS is the specials ops force of the U.S Navy. Soldiers of the Navy SEAL are also called frogmen. A frogman is trained in scuba diving and underwater warfare and other military activities. What is a bone frog tattoo, you might ask? The bonefrog was originally drawn by a soldier who passed away in a training accident in 1997. The original bone frog shortly became an icon of the Navy SEAL to honor its fallen men and women. The image is of a skeleton of a frog holding a trident, which is also the insignia of the Navy SEAL. It is one of the most common tats for civilians honouring the soldiers who protect the nation. Let us now explore the best bonefrog tats curated just for you!

This bonefrog tattoo is in the original style, with the initials of UDT/SEAL visible, which means Underwater Demolition Team, SEALS. Arms tattoos are great for showing off under t-shirts and also the biceps that you develop over years of training. The SEAL trident is also perfectly drawn here. A great frog bone tattoo (SEAL) for any soldier marking their respective unit in the Navy SEAL, somewhere on their body.

The Bone Frog Tattoo On Chest

Skeleton tattoos look stunning thanks to the intricate details that go in the design. This piece here looks incredibly well-drawn, with both the bone and metal trident textures looking realistic. This bone frog design is great for Navy SEALS or civilians alike. You can honor a fallen SEAL through a frogman tattoo, or a bonefrog tattoo like this.

A small bone frog tat on the arm for anyone looking to get a Navy SEAL-inspired tattoo. You can complement this bone frog arm tattoo and wear a g shock watch like the SEALS, who typically wear a g shock as a rugged timepiece for all purposes. You can find veteran ex-SEAL wearing a similar bone frog body art, and rock the same look, wear gatorz sunglasses too.

We really like the black outline of the frog’s frame around the skeleton of it. The tattoo artist has put their own touch to an iconic design. Tattoos of skeletons are usually tough to pull off but this artist absolutely nails it. The trident tattoo also looks great with the bone frog. The lines are neat and sharp and it manages to catch the essence of this iconic tattoo design.

Bone Frog Tattoo as a Tribute to Fallen Friend

The bond between friends transcends life itself, and a bone frog design is a perfect tribute to your fallen Navy SEAL friend. The pain of a soldier lost is irreparable but at least their memory and sacrifices live on forever. You can see “56” and “Hunter Strong” along with the frog which probably indicates the soldier’s unit. One of the most symbolic tattoos in this list of bone frog tats.

Another creative take on the epic design, this tattoo shows a frog that is half living and half dead, sitting on a lily pad. “The only easy day was yesterday” is a quote that is popular in the Navy SEALS and you can add that along with this tattoo which is showing the duality of a soldier’s life. It’s a SEAL thing, to be the toughest soldier on the planet and this tattoo is a meaningful one that pays homage to the formidable military force.

We love this fine-line tattoo of bone frog design. A bottle is a form of a transparent coffin, which adds a layer of meaning to this tattoo. Such creative concept arts are always welcome and are the reason why tattoos are important. Getting this bone frog tattoo somewhere large would be a great idea, as the fine lines can be drawn better and we would recommend the calf or thighs as ideal locations for this military-inspired tattoo.

This frogman means business. The term was used as slang for Navy SEALS but is now their informal designation. We see the frog wearing diving gear, holding a gun. We can see the UDT (Underwater Demolition Team) initials also present. This is a really badass elite forces bone frog tattoo for anyone looking for Navy tattoos.

This one looks like a beautiful pencil sketch of the famous bone frog design. The delicate shading gives this an etched look that is very subtle and unique. A very fresh design of the bone frog tattooed on the ankle, which is a desirable area for such small tattoos.

This bone frog thigh tattoo shows how a big area can enhance the look of any tattoo as there is more space for detailing. This tattoo signifies the fragility of life and the risk taken by soldiers to keep the nation safe and definitely deserves a large space on your body. We like the symmetric design which makes it satisfying to look at. Definitely a top contender for bone frog tats.

What is the meaning of the bone frog tattoo? The Navy SEAL bone frog tattoo meaning is that it is an honorary emblem to all the soldiers to lost their lives while serving the nation. If you are looking to enlist in Navy SEALS, then you would be glad to know that the US Navy has a very lenient tattoo policy. Rest assured, a tattoo of bone frog is perfect if you are a true patriot at heart.