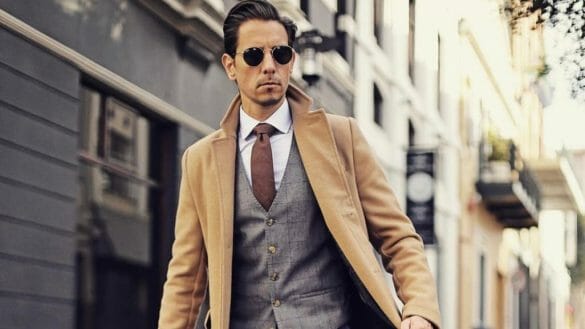 A bomber jacket is a great all-rounder, being accessible to everyone and easily styled to suit every man. If you are a fan of this jacket style, you’re in the right place. Outsons gives you the conclusive guide to the best bomber jackets this spring/summer.

The bomber jacket is an icon of enduring style. Since its inception a century ago, it has clothed the backs of wartime fighter pilots, movie stars and A-list footballers. Crowned the ‘It’ jacket back in the day, you’ll be pleased to know that the bomber is here to stay for spring/summer 18.

A warmer climate calls for a lighter jacket and fewer layers. This style guide is a conclusive guide to the best bomber jackets for this spring/summer. We’ll also go one up and show you how to wear them, too.

As with most menswear classics, the bomber jacket started life as a military jacket. With the introduction of air combat during WWII, pilots required jackets that could be worn in cramped cockpits at high altitude. At this time, cockpits were open and pilots were exposed to the elements, so they required an insulated jacket that was waterproof and would protect them from the elements. Early bombers were constructed from leather or shearling and boasted a fur collar to ensure pilots were warm when flying in the open cockpits. As aviation advanced, waterproof cotton outers were developed.

The key features of the bomber include its cropped length, boxy structure and lightweight materials which used to construct them. These were all attributes that owed to the practicality of the garment for pilots wearing them. And the iconic orange lining? There’s a history behind that, too. To improve the visibility of pilots during rescue operations, the orange lining was included on the bombers design, which could be reversed and worn on the outside.

Since then, the bomber jacket has gained popularity among youth subcultures like much of the military wear that came before it. Most notably, skinheads during the 1980s favoured the bomber, worn over T-shirts and polo shirts tucked into acid wash jeans and Dr Martens.

How to Style It

The bomber is a versatile style staple and can be dressed up or down depending on what you want to wear it for. The ultimate casual jacket, the bomber can be paired with joggers for a laid-back look or smartened up with chinos for a more formal feel. Whichever way you style your bomber, keep the look simple, classic and understated.

There are now a fair few variations of the classic bomber on the market, so use this to your advantage. Whether it’s a padded bomber, lightweight, quilted or leather, the bomber is a great all-rounder.

Joggers and a grey sweatshirt make the ultimate pairing in a relaxed, casual setting. If you’re looking for a low maintenance way to style your bomber, then this is it. To avoid over-complicating things, keep the colours plain and muted.

Alpha Industries were producing bombers and flight jackets for the military during the 1950s. Since then, up until the eighties, the MA-1 model was US Army standard issue. Now, they are produced on a commercial scale but still retain the high quality and vintage feel of those original jackets distributed throughout the armed forces since the fifties.

For a casual look that feels a little more dressed up, opt for jeans instead of joggers. Plain white T-shirts and Chelsea Boots are a fantastic way to dress your bomber jacket up. They highlight the jacket more and it’s a great outfit that is versatile enough to be worn to a club as well as to a restaurant.

Although typically considered a casual jacket, the bomber can be easily dressed up for more formal wear by pairing it with a smart shirt and a pair of chinos. As long as you colour coordinate the outfit and keep the colours subtle, you’ll be onto a winner. If you feel you are really bad at colour coordinating different looks, you should simply stick to wearing any colour with white or grey – it’s failsafe and you can’t go wrong.

A lightweight Soulland bomber leans towards the varsity jacket style in a brighter colour with a white zip, yet still retains the classic bomber design. This is a great bomber alternative if you want to style your bomber less casually. Alternatively, you could wear an Alpha Industries bomber jacket with a white Oxford shirt and black jeans for a smarter ensemble. Finish this look off with some Chelsea boots and you’re onto a winner.

If you’re in any doubt, look to the likes of Bradley Cooper, Kanye West and Scott Disick for some bomber inspiration, all of whom show us that the jacket for spring/summer ’18 is as versatile as ever. Styling a bomber jacket with a pair of jeans seems to be, by far, the best and easiest way to wear it. Take a leaf out of Kanye’s book and pair with a graphic tee or, instead, channel vintage vibes like Bradley and wear one with a pair of aviator sunglasses.

Bombers really are a key item that should go in every man’s wardrobe. They’re easy enough to wear every day and can carry themselves if worn with a shirt for a night out. It’s the versatility of the bomber itself that has carried it from military issue to style staple over the past 70 years. If you want to dress smart, a black suede bomber jacket should go straight into your wardrobe. With the ever-growing popularity amongst celebrities and the fashion world, it looks like the bomber will be around for many more years to come. We’d stock up if we were you.