10 Best Bomb Tattoo Ideas You’ll Have To See To Believe! 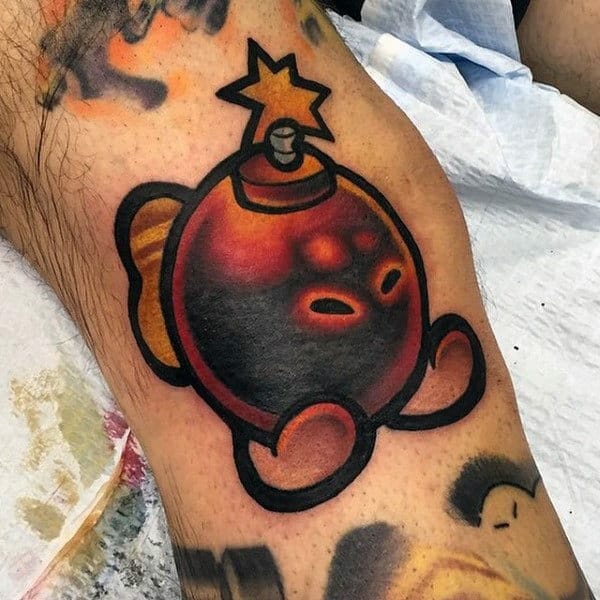 If you are searching for the best bomb tattoo ideas, then look no further, as we provide you with an amazing list of bomb tattoos.

Bomb tattoos in general are pretty subjective when it comes to meaning, usually depending upon the owner than acting as a universal symbol.

People who ink these tattoos usually mean various personal things. However, they sure are one of the most popular tattoos around.

Generally, bomb tattoos express the personality of a person. It means that you are a bold person. At times it also means you live a life of thrills. Including other soft designs such as flowers or butterflies might mean you are ready for any battle outside but rather peace is the thing that is close to your heart. You might have experience and know the horrors of war and you can spread the message of peace using bomb tattoos. For more information on what bomb tattoos mean which would be best for you, go through the list below.

You can go for a traditional shark-like bomb tattoo with ‘Calm like a bomb’ by ‘Rage against the machine’ surrounding it to express your love for the song or your personality, such as the picture above. You can other English or other words of other languages and you can tattoo more generic bomb tattoos as well. These tattoos can be best for a man or woman.

Cherry bombs are a kind of small-sized firework. It doesn’t necessarily represent any particular thing, but it’s certainly a unique type of bomb tattoo. There are many designs of the cherry bomb tattoos and some can make you express the sexy side of you.

Everyone is familiar with the picture of two cherries with stem hanging. In a similar way, you may change the cherries with the bombs and you get a unique bomb tattoo. You may go for other classic tattoo designs of cherry bombs as well.

This kind of tattoo can help you express your personality. A side of your personality that you want to say is if someone ticks you off, it’s just a matter of a few moments till you explode. These are one of the less popular bomb tattoos in 2021, but the designs are praiseworthy.

You could get a classic tattoo of a time bomb with appropriate words surrounding it like the one in the picture above. Tweak with the classic tattoo at your heart’s desires and if your tattoo artist is at the same page as you, then you will get a perfect tattoo.

You might think that atom bomb tattoos would have negative connotations, when rather they mean something different altogether. Tattoos of atom bombs show the horrific consequences of war and usually mean wishes of peace instead of the chaos and blood of war.

There are many designs of atom bomb tattoos, but there’s always the mushroom cloud that can be seen to show the meaning of these bombs as shown in the picture above with clean features of the atom in the middle for clear interpretation. Get your own atom or nuclear bomb tattoo if you want to share peace in this world as well.

Shapes of bombs into other things have become popular tattoo designs in 2021. Mind in the shape of a bomb tattoo might mean that you are full of ideas, thoughts and can explode anytime. You can design the tattoo in other ways to express your desired meanings too.

Overthinking can lead you to feel like your head might explode. You can express that with a tattoo of a mind bomb as in the picture above. You can also get a tattoo of an bomb exploding from an open head. Let your tattoo artist come up with your version of the tattoo of the mind bomb.

You can get a full heart-grenade tattoo in red, blue, or other colours such as the picture above. You can also get one in black and grey or in dotwork and they will look cool too.

Skull bomb tattoos are pretty common and like atom and nuclear tattoos, these don’t always have negative connotations. At times they tell the dangers of bombs, other times they mean that you like to live a life full of thrills.

You can go for any design of the skull tattoo such as the classic skull in a bomb tattoo with a little soft touch of a butterfly design included as the picture above. You can also opt for cartoon designs, scary ones, or colourful ones for your skull bomb tattoo.

The picture above shows an extremely colourful bomb explosion tattoo that just pops out on the skin. You can go for a black and grey one as well and we can say for sure that they will look perfect on you.

Usually, bomb tattoos are small and fun. Whether coloured in red, blue, green, or black and grey, these tattoos don’t take up a lot of space on your skin. However, you can opt for large full sleeve bomb tattoos of a war scene if you want as well. These war scene tattoos usually serve as a reminder of how horrible war actually is.

The picture above shows a full sleeve tattoo of bombs falling from the sky on a beautiful landscape of nature in the middle of a war. You can go for any kind of war scene tattoo as they can help you share the message of the necessity of peace.

There is no one best tattoo of all time, but bomb tattoos are surely one of them. Traditional, skull tattoos from the list above are some of the most famous. Much work goes into making a tattoo art best and for that, first you need to find an available good tattoo artist. This offers you the best opportunity for a masterpiece tattoo. Don’t look back and get your favorite tattoo parts done.