10 Best Black Tattoo Ideas You’ll Have To See To Believe! 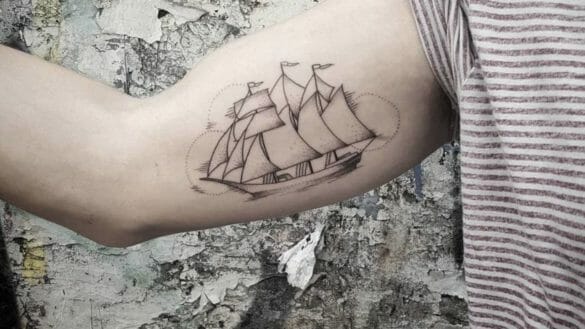 If you want classic tattoos, then black ink tattoos are a great way to go. Here’s a compilation of some of the best black tattoo designs for you.

Initially, tattoos were mostly black and white tattoos as there was not a multitude of ink colours to choose from.

But over the years an abundance of colour choices have arisen giving customers now a whole palette of hues to choose from. Yet white ink tattoos or black tattoos tend to dominate the tattoo scene, even now.

Black ink is the most commonly used tattoo ink. But what is black tattoo ink made of? It is usually made of soot, comprising of oxidising products called hydrocarbons. The black ink can even contain animal bones burned down to form charcoal. The blackout tattoo has especially been a hot trend in recent times. Popularised by a current crop of tattoo artists, these solid black tattoos covering entire limbs is quite an obsession among the youth. However, it can seem to be cultural appropriation due to association with ‘black face’. Before letting your creativity go free, phone your doctor before going for these as black ink can be detrimental to your health, as it contains a carcinogenic component, benzo(a)pyrene. Here is a specially curated list of great black tattoo designs you will want to cover your skin with as soon as you see them.

Well, all roses do not have to be red to be gorgeous. A black coloured rose tattoo is an outstanding idea to make a statement on your skin. But what does a black rose tattoo mean? The most common symbolism attached with it is that of death and grief. However, it is also the symbolism of strength and rebellion with the Irish using this flower as a motif of resistance against the English regime during the 16th century. There was even a very popular song called ‘The Little Black Rose’ to commemorate this act of defiance. This tattoo design can also be a sign of hope – sailors used to get black coloured roses as a sign of hope before going on a really dangerous trip on the high seas. Thus, if you are happy to leave your tattoo open for interpretation, this design is certainly for you.

Quite hard to meet someone who is not a fan of the Marvel superhero T’Challa a.k.a the Black Panther. Often credited as the first Black superhero, the tattoo of Black Panther will also be quite a bold political statement amidst this ongoing disease of racism that has been plaguing the world since time immemorial. 2020 has been especially a tragic year with the passing away of the actor who played the superhero onscreen – Chadwick Boseman. This tattoo can be a tribute to him also, with the image of Chadwick superimposed on the Black Panther mask. The use of different bright coloured ink also makes this tattoo quite cool looking. So what are you waiting for? Get this and be a Wakandan forever!

The black cat has been associated with occult rituals and witchcraft since the beginning of time. It is also a common superstition to pause and wait if a black cat crosses your path as the animal is presumed to be ominous and a sign of bad luck. But presently, in the last decade or so, admiration for the creature has increased rapidly with the cat-loving crowd growing exponentially. The animal has ceased to be mystical and is more of a symbol of admiration for feminine qualities. Being a secretive and mysterious creature itself, the black cat is a great choice for a tattoo design, especially for introverts. You can go for a cat head tattoo with a special focus on the eyes, or pair it with black roses and a moon to give it a more pagan feel.

One of the most common tattoo designs out there is the armlet or the armband tattoo. But what does a black band tattoo mean? These solid black tattoos usually represent grief and mourning at the passing of a loved one. It is a popular practice to get a band inked for each loss. However, if you want to get such tattoos but rather not the associated symbolism with them, you can opt for Maori-influenced armband tattoos. These traditional designs are influenced by New Zealand’s native warrior culture. You can also opt for other tribal designs, or a specific one to honour your indigenous roots. There are a number of popular designs out there that includes things such as feathers, arrows, bows, tribal shields, and many more.

The moon is associated with a wide range of religious and cultural beliefs. Particularly, crescent moons are the embodiment of fertility and motherhood, as is believed in many cultures worldwide. They are also associated with creativity, growth, and manifestation. The skull, on the other hand, is a symbol of death. In Christianity, the skull is a representation of vanity, of reflection of death. This ornamental dark-themed tattoo combines both these aspects, thus giving it an overall gothic and creepy look. It is the perfect Halloween tattoo if you are going out with your friends, dressed as forces of evil, and will complement your costume whatever you choose to dress as.

The Black Spade Tattoo For Gamblers

Gambling is a vice that is usually frowned upon, but then we are not here to judge. Getting card suits tattooed is now a common practice among biker gangs and gamblers. However, the black spade, especially the ace of spade, has a dark past in the history of the United States. So what does a black spade tattoo mean? It was traditional for the American soldiers to draw ace of spades or other card suits on their helmets during the Second World War for good luck. It also served another purpose in helping to identify the nationality of the casualties. However, it took a much darker turn during the Vietnam War. Ace of spade cards was placed on the dead bodies of the Vietnamese fighters to strike some form of psychological fear in the minds of the Vietnamese. For the Vietnamese, the ace of spades symbolised death – entire fields covered with such cards, one each for the dead body of a Vietnamese soldier. You can get this tattoo, coupled with dice, chips, or coins to give it a more distinct gamble theme.

Project Brutality or the Brutal Black Tattoo Project was the idea of three tattoo artists – Cammy Stewart, Valerio Cancellier, and Phillip Kreuze. These tattoo artists specialised in blackwork tattoos which means large scale tattooing that is solid black in colour. Similar to the traditional customs of tattooing practised in several parts of the world, the Brutal Black Tattoo Project aims to cut away from mainstream tattooing practices, which is essentially all about aesthetics, pretty flowers, cute animals, and birds. The whole experience of the blackout tattoo is more about the inflicted pain by the needle in the process than any aesthetic result in the end. The unique idea behind the blackout tattoo project is nothing but to cover the whole body in dark black masses. Some view it as social suicide, while the one’s sporting such tattoos consider them to be the ultimate makeover and how they view themselves. If you are going to get one, it is imperative that you are wary of the painful experience and also check on the expertise of the tattoo artist.

The lotus continues to be a popular choice for getting inked for many aspiring tattoo lovers out there. The main reason behind this is, apart from being one of the most gorgeous flowers, it is considered a holy motif in almost all religions, including Hinduism, Shintoism, Buddhism, and Taoism. The lotus enjoys the same popularity in the East as much as the rose does in the West. The Black Lotus is an incredibly rare flower and hence a popular choice for a tattoo. While lotuses symbolise life and the idea of creation, the colour black is commonly associated with grief and death. Hence, a black coloured lotus tattoo signifies the relation between life and death. Hence, if you are a nature lover and a fan of irony, this black lotus tattoo is apt for you.

Does life exist on any other planet apart from our Earth? While scientists have been looking for definite proof of an extraterrestrial form of life, a huge section of the internet conspiracy theorists already believes so. Hence, the raging popularity of films such as Steven Spielberg’s ‘E.T.’ and James Cameron’s ‘Alien’ franchise. These theorists use minute details and theories, blown out of proportion, to substantiate their claims. While the knack for humans to know beyond their planet has been there since the beginning of creation, the trend to get alien tattoos has been a popular trend since the last few years and continue to be so. Hence, if you are a conspiracy theorist or even a fan of popular science fiction, this Black UFO Flash Tattoo might be perfect for you to show to your fellow theorists or reading group.

Like most other dark-themed tattoos, this tattoo design is also most commonly associated with mourning the death of loved ones. Additionally, the dark heart is a common theme of heartbreak and is correlated with the ending of a relationship or commemorating a tragic event. There has been a historical trend of getting black heart tattoos in memory of the death of a close person who lost their lives in some catastrophic events. You can find other symbols to add to the black heart to add another layer to the tattoos, such as a dagger to symbolise betrayal.

The blackout tattoo trend or the black tattoos, in general, are here to stay. But given the medical concerns it may arise, it is always safe to seek medical help before getting inked. Also, use certified tattoo stores and experienced artists to get tattooed to decrease health hazards and enjoy a relatively pain-free and safe experience. To know more about these concerns as well as to see more amazing designs.