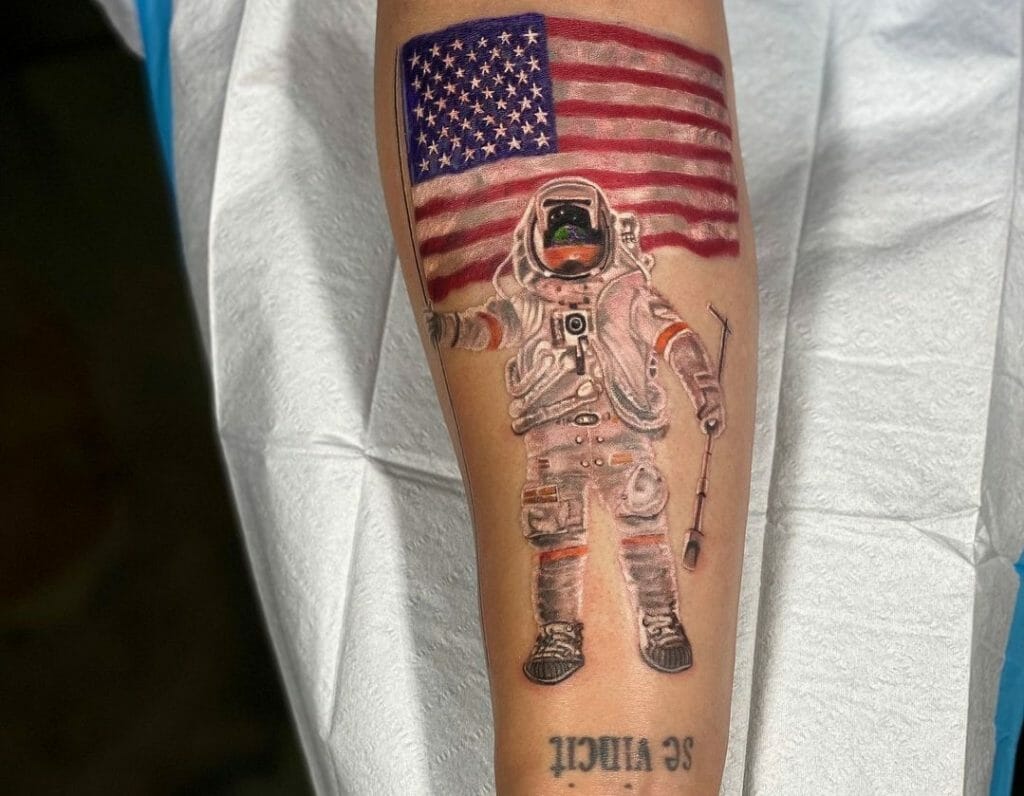 Planning to ink a patriotic tattoo? We got your back with these incredible black American flag tattoo inspirations that are uniquely stunning.

With the colours red, white and blue, the American flag has been a nation’s pride since 1977.

While looking through a few American flag tattoo images, you must have come across some in black. Well, be it curiosity about these flags, or for some inspiration, you are exactly where you are supposed to be.

American Flag We The People Tattoo

The Preamble to the American Constitution starts with the phrase ‘We the People’ and this will always hold appeal to all Americans. The phrase means that all the power that was derived to create the Constitution has been drawn from the people of America collectively. If you are an American, you would know how much this phrase means to the nation and inking it on along with your American flag will symbolize patriotism. This tattoo has been placed in an entire arm and it has to be one of the most patriotic tattoos you will ever come across.

The patron saint of marines, paratroopers, police officers and military personnel. This tattoo features a spread out American flag with an image of St. Michael, the leader of the heavenly army who will always defend us in a battle with the rulers of darkness, on it. Bring in blessings with an angel tattoo like this and add the American flag at the backdrop. This tattoo also has the Latin phrase ‘Beati Pacifici’ that translates into ‘blessed are the peacemakers’ making this tattoo even better.

If you are looking for a simple and small one, and without any embellishments, and yet want to honour your country and ink on your pride, a black and white small American flag tattoo like this should be your go-to. Using the contrast of black and white in an American flag like this, makes the designs easily distinguishable and look super cool at the same time.

Although black and white is a great thing to ink, you can also always alter it for a black and gray style to give your American flag tattoo an intense effect. Add an eagle to your tattoo like the one here, and make a bold statement of your love for your country. You can always incorporate different styles and give it your personal creative touch and your tattoo will always stand out.

A shoulder tattoo usually represents strength and power. As we already know of how the shoulders in the uniform of a defense personnel have embellishments declaring their rank, a shoulder could also make a great display placement for anything you are proud of. And hence, another perfect placement for an American patriotic tattoo. Add in details like the eagle-like the one in this tattoo with a quote of your choice and make it unique and bold.

Tattoos in hidden areas like the back, are very personal since they are not just a subject to be showing off. This tattoo features a military hat, a rifle and a shoe as a tribute and respect for the fallen ones. If you too have lost a lost loved one in a battle, this tattoo is perfect for you. Also, let’s please take a moment to appreciate the stunning work by the artist in this image.

You must be wondering now, how much do these flag tattoos for men even cost? Well, to answer, it will cost you an average of around $120. We know, these specific tattoo designs could be a little pricey, but trust us, it will be worth it. You can always talk it out with your artist and incorporate any other designs of your choice like the Statue of Liberty or a cross and celebrate the 4th of July every single day.