10 Best Bird Behind Ear Tattoo Ideas That Will Blow Your Mind! 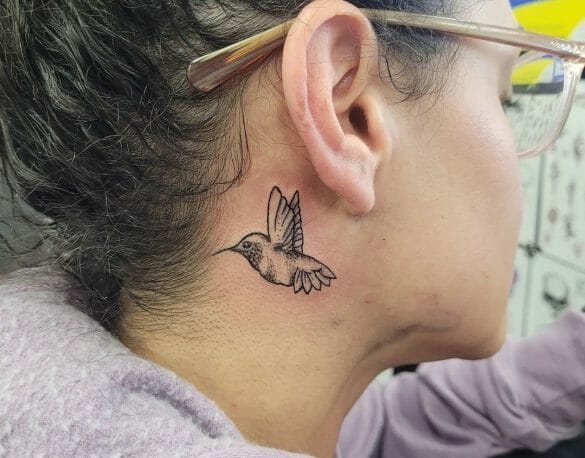 Are you looking forward to getting a bird tattoo behind your ear? Here is a list of some awesome bird behind ear tattoo ideas!

Different tattoos have different meanings. If you consider yourself to be a free spirit, bird tattoos are the ones to get! It is similar to what a butterfly tattoo represents. A flower tattoo on the other hand represents that you are ready to explore your full potential. A dove tattoo represents hope and peace, this could also be a beautiful tribute tattoo. Birds have always been a sign of freedom and hope, if you’ve been through a troubled moment in your life or if you want to bring peace and happiness in it. Many cultures believe that birds remove negative influences and increase your feminine energy. For the past few years a music note tattoo, a small butterfly tattoo, a tree tattoo or a scissor tattoo have gained popularity. Moon tattoos and sailor tattoos have started to become less popular.

This is one of the most popular behind the ear tattoos. This design is favoured among women and since it is a small tattoo it is considered to be discreet. In black ink with a little bit of shading, this ear tattoo shows a little bird soaring towards the sky. Whenever you want to get a new ink tattooed that will turn heads make sure that the tattoo has a great placement. In Native American cultures, a soaring bird means that you are a free spirit. Small tattoos cannot include a lot of detail so there must be only one element to the tattoo unless you want the tattoo to extend to your neck. If you want to express that you are ready to travel or that you like the nomadic lifestyle, you get a similar tattoo behind the ear or on the neck.

A flying bird tattoo behind ear meaning you are a free spirit makes for a great tattoo! In this popular tattoo design, we have a lovely minimal outline of a bird holding an olive branch between its beaks. The branch and leaves are inked in solid black. Scissor tattoos also have a similar message except the scissors are a metaphor for “cutting out” the negative energy around you. The branch adds the message of peace. Some people also like to add a roman numeral or a cluster of roman numerals which represent a memorable date. This tattoo design is both cute and delicate and is placed closer to the neck.

Here is a black small bird tattoo placed below the ear. The bird is inked like a sketch, with a small patch of orange-red near the throat. This design doesn’t have any bright colors but has been made in the neo-traditional and contemporary style of tattooing. This design has not been made with a tattoo machine, but with the poking technique. The bird is a sparrow and represents being free.

Flock Of Birds Behind The Ear Tattoo

This design is a combination of three small bird tattoos inked in solid black.

This is a great idea if you want your tattoo to symbolize that you are letting go. It is a permanent reminder that you have covered a long journey and that you have overcome the dark times. Birds have been one of the universal symbols of peace and moving towards the positive light. You may also get such a tattoo to represent the three important people who have greatly impacted your world. The ear placement also adds to the appeal.

Dove Behind The Ear Tattoo

This is a simple line tattoo of a little dove. It symbolizes peace, harmony and freedom. This design has been seen mostly in women and has also become a sign of hope. Doves are included in certain celebrations, for example when someone is getting married, doves are released after the ceremony. Doves in flight also represent letting go of something. You may have had some negative energy in your past so you can get this tattoo as a representation that you are letting go of what might have been holding you back.

An owl is part of the zodiac signs. If you are born in January then an owl represents your zodiac sign. Owl is a symbol of luck and is a metaphor that you can create light and be able to get through the dark at the same time. An owl in flight also represents that there is hope to a safe harbor and that you should not lose hope. Designs like this also feature a yin and yang, which means that the world is in perfect balance. A heart tattoo symbolizes new beginnings and long life so some people like to add that too. Owls are also considered to be gentle birds unless they sense danger, this could also be a metaphor for your personality. Maybe you may think that people take you for granted or are not taking you seriously, so this tattoo idea may be symbolic of your struggle.

Small behind ear tattoos are considered dainty and discreet. This little hen or a chick is placed behind the ear and is tattooed entirely in a stick and poke tattoo style. The hen is not a representation of something but is used as a joke. Tattoos don’t always have a deep meaning some times they can just match your personality trait. This cute bird tattoo can easily be concealed behind long hair if you wish.

Banana Covered Up With A Bird Tattoo

A large tattoo design helps easily cover a tattoo that you may have gotten before. The previous tattoo that was there looked like the tattoo artist had not done a great job or maybe the client wanted to try on a new design in the same place. Smaller tattoos always seem delicate and larger tattoos are to represent that you have a bold choice. The bird that this design has made is a raven. The design looks feminine and sleek. Sometimes people like to cover up their tattoos as they may have started a new chapter in their life and they want the tattoo to be symbolic of that.

This is a combination of four small birds and is the traditional way how birds are shown. The birds are in-flight with wings stretched in different ways. The birds are styled in black ink. This symbolizes that you are ready for a new chapter. Ear tattoos are normally small tattoos and placed behind the ear, they are preferred as they are discreet. They are also more painful than other body parts as it is on a bone rather than a muscle.

The tattoo artist’s style is different here as the design is in the Japanese style of art. In Japanese culture, birds represent peace and harmony. This design means that you are at peace with yourself and that you are ready for what life has to offer. There are three swallows, placed on top of each other, with their narrow, sharp wings outstretched. This tattoo also symbolizes that you are hopeful. Ear tattoos are mostly seen on women as they have become a fashion symbol. They have small tattoos but it has a powerful message. Some women like to include different elements in their tattoos for example a small heart or a flower. These types of tattoo styles have recently been popularized due to celebrities.

Bird tattoos behind the ear have recently become stylish, some people like to get a bird as a sleeve tattoo. Ear tattoos are considered to be discreet tattoos. Behind the ears, tattoos are preferred by women rather than men as they are a fun way to express yourself. Here are some design ideas if you are thinking of getting a bird behind your ear tattoo.