10 Best Binary Tattoo Ideas That Will Blow Your Mind! 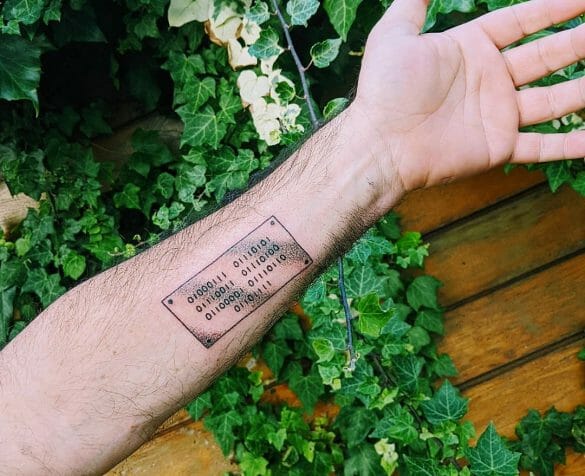 Binary tattoos are a string of 1s and 0s.

Binary codes have a profound meaning in the computing and telecommunications fields.

Binary tattoos are a combination of asymmetrical patterns and are visually stimulating. Binary tattoos are especially popular among tech geeks. They tend to have a pattern in plain sight but have a hidden meaning. Binary tattoos have creative lettering and a complex system. It’s the same as humans and their DNA. The actual image of the binary code that is shown in the movie is the program that runs on the computer. Binary tattoos also mean that you like to have a hidden message in your tattoo. A lot of people prefer to get them as it has a deeper layer metaphorically and they are exceedingly common. If you consider yourself to be an introvert or maybe you don’t like to express yourself in the open to everyone, then this tattoo design is the one for you. Although, they can have personal meanings assigned based on the wearer.

Check out our list of awesome binary tattoo ideas that you would definitely love!

Some tech geeks like their tattoo to have a numeral binary code. Placed on the arm, this tattoo design has ones and zeroes inked in black in a dot work tattoo style. This tattoo represents that you can have a hidden message that is extremely personal. These types of designs achieve greater visual interest as they look like they have a message, but you need to know the language. This design has been popularized due to the increase in surveillance in the past few years. It seems to have created paranoia among people and so these designs have also started to gain popularity.

The primary focus of this tattoo is the computer system. These types of tattoos are gaining popularity due to their design. The circuit design is inked in electric blue. All lines connect to the chip in the centre, which has the binary code designed in black. This tattoo is simple and it has a hidden message that you need to decipher. There are a lot of female tattoo artists that excel in these types of designs. This is similar to cyberpunk which is a video game and movie. They have elements of humans being part robots.

This tattoo looks like the motherboard of a computer. Placed against a black background, this tattoo highlights the lines and circuits in skin colour. Behind these lines is a hidden code on the forearm. This gives a futuristic design vibe that has private meanings assigned to it. These types of binary tattoos have been made popular by the video game “Cyberpunk 2077.” It features humans that now have a modem inside of them that works with their bodies like robots. It looks strikingly similar to an arm sleeve tattoo.

This tattoo is a combination of different tattoos that are overlapping each other. This scene composed of a human face, geometric shapes, binary tattoos and a body outline has a huge appeal among tattoo lovers today. It seems like this design is questioning the existence of mankind in general because humans are slowly turning into robots. Like you have to really focus on the details to understand the tattoo.

A lot of people question society about surveillance and how we are being watched all the time. This design has put a twist to that by showing how we can be paranoid about the world around us. There is some binary code in the tattoo, they have also added an image of a man walking in the dark. The artist is trying to show that we humans are afraid of the dark.

This design is paying homage to the movie, “V for Vendetta”. History has taught us about dystopias and how our thoughts are being monitored. The ones and zeroes of a binary code make up the features of this Vendetta mask.

Binary tattoos can also look cute. For example, in this design, they have replaced the zeros with hearts. This tattoo is placed on the upper arm. The tattoo artist wrote “non-binary” in binary code on the clients’ arm. It is a humorous and clever play on the words. It can be a message from the LGBTQ community for people who identify with non-binary genders. The little hearts in the place of zeroes make this a wholesome tattoo brimming with love. So, in a way, this is a non-binary tattoo, as well. You can also use this opportunity to get a feminist tattoo showing the world that you believe in the upliftment of women and equality in general.

This is a combination of two tattoos. They have added a tree tattoo, which symbolizes peace and harmony. When elements of nature are added with the binary code it means that you want to symbolize that you are one with nature. We are in a constant battle with what is natural and what is man-made, for example, medicine. This tattoo design also represents that you are at peace. You are not worried about the future and that you have reached a stage in your life where you are finally able to accept yourself. The tree is wonderfully inked in green brushwork while the code is in black ink. A binary sunset tattoo would be another great idea for a nature tattoo.

If you are a tech geek or love mathematics, then this binary tattoo sleeve design is the one for you. The artist has featured some mathematical equations with the binary code and has divided it to make it into two sleeves. Mathematics is often associated with secret societies and being part of some underground resistance. Some people like to get these types of designs because they may symbolize that they are part of something bigger in society.

This tattoo is overlapping other tattoos as well. With huge pink flowers in the background, the binary code is designed around the flower petals in curved lines. Binary tattoos are often made with other tattoos as the person getting the tattoo wants to show that they are in harmony with themselves. It’s like a soul-searching process. Flowers represent peace and that you are at one with yourself. It also means that you are ready for what the world has to offer you. So a combination of tattooing these two designs would mean that you may be looking forward to a new chapter in your life and that it may involve trying something new.

If you are an introvert or you want your next tattoo to be simple yet have a deeper message, you should consider binary tattoos. Sometimes people like to get a QR tattooed as it may seem like a simple code, but once you scan it, it’s like a treasure hunt. These types of binary designs are also easy to get as they may not require more than one sitting to complete. Here are some Binary tattoo designs that you can check out.