101 Best Billy And Mandy Tattoo Ideas That Will Blow Your Mind! 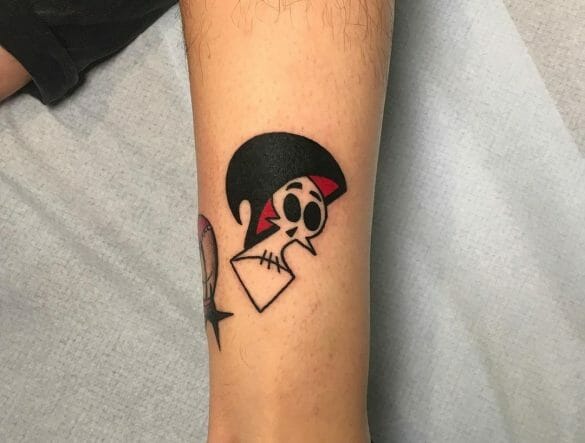 Feeling nostalgic about your childhood? Get comfy on your couch and let us help you get the perfect The Grim Adventures of Billy and Mandy tattoo!

The Grim Adventures of Billy and Mandy aired on Cartoon Network from 2004 to 2007, amassing a wide fanbase.

The show deals with a dim-witted boy Billy and his ultra nihilistic and cynical friend, who gain the Grim Reaper in eternal servitude. Although Grim hates it initially, he does learn to find comfort in his new life.

The slapstick comedy show began as a spin-off of Grim & Evil and became a full-time show later on. It was met with largely positive comments and was enjoyed by both kids and adults alike. All the 3 characters have completely contrasting identities which build the primary humour of the show. Grim’s tired and reluctant attitude is to date cherished by millennials and the gen-z. This makes Billy and Mandy tattoos extremely popular nowadays. Most of the tattoos are small, colourful, and fun to see. Here we have curated the best The Grim Adventures of Billy and Mandy tattoos for the child in you!

The No-Fuss Tattoo of Grim, Billy, And Mandy

This tattoo features the main characters from The Grim Adventures of Billy and Mandy in their natural element. Tattoos like this offer the client to get something simple and special without making things complicated. Billy’s dumb smile, Mandy’s anger, and Grim’s tired face are the essence of the show which the artist has managed to log successfully in this tattoo. The colours in this Grim Adventures tattoo are perfect and they show the skills that the artist has to offer.

The Grim Adventures Tattoo for Fans Of The Powerpuff Girls

The Powerpuff Girls was another iconic show from our childhoods and no wonder this artist fused the two shows together to create a unique and memorable tattoo. Billy is dressed as Bubbles and Mandy is dressed as Buttercup. Grim is the cutest of the bunch dressed as Blossom. Both of them are seen in their usual moods, with Billy flashing his wide grin and Mandy annoyed as ever. This is a colourful design for anyone looking for such The Grim Adventures of Billy and Mandy tattoos. We can assure you that it’s an offer you cannot refuse.

The grumpy and cynical character of Mandy has been a fan favourite from day 1. Most of us who rewatch the show as adults can connect to her even more. It feels like the tattoo was cut out right from the show itself. Mandy’s menacing and disapproving stare in this tattoo has made this one of our favourite The Grim Adventures of Billy and Mandy tattoos on this list.

The Tattoo of Grim

The Sleeve Tattoo of The Grim Adventures of Billy and Mandy

Tattoo sleeves are one of the coolest things to see if pulled off correctly and this sleeve of The Grim Adventures of Billy and Mandy is a perfect example of that statement. The iconic Cartoon Network show gets a superbly executed Grim Reaper, Billy, and Mandy tattoo sleeve. The bright flame in the background does work very well with the rest of the design and also acts as a theme. We love how fans come up with brilliant tattoos of their favourite shows and The Grim Adventures of Billy and Mandy definitely has a great fanbase.

Imagining a cartoon character in black and white is weird but then this tattoo artist has done an amazing job. Black and white tattoos offer a very unique charm which is quite evident here. The addition of the exposed tissues in a zombie style adds a creative layer to the design of Mandy. Mandy is a symbol of cynicism and this black and white piece is a perfect representation of that fact. This is definitely one of our favourite The Grim Adventures of Billy and Mandy tattoo designs.

The Portrait of Grim Tattoo

The usual thought about Grim tattoos is that they are tattoos about pain and suffering. That is definitely not the case with this super cool cartoon Grim Reaper tattoo. The flames behind add a splash of colour to this Billy and Mandy Grim tattoo. A highly recommended design in this list of The Grim Adventures tattoos.

The Tattoo of Mandy as Blossom

Another Powerpuff Girls inspired design on this list. Mandy already has yellow hair in the cartoon which makes it easier to transform her into Blossom. But the disapproving face still gets featured in this cool design of Mandy. If you are a fan of The Grim Adventures and a new tattoo enthusiast, this small piece of Mandy is perfect for you.

The Tattoo of Happy Billy

Billy is a happy-go-lucky guy with a dumb spirit that was charming in its own way. Billy gathered a massive fanbase due to his non-complicated brain. This black and white piece portrays that emotion beautifully. The shading is perfect and doesn’t let you feel the absence of colours. A really cool tattoo of Billy, an iconic character out of childhood.

Cartoon Network has given us some memorable shows to watch over the years. The channel was a household name, and still is a great source of entertainment. Courage the Cowardly Dog, CatDog, and The Grim Adventures define a golden era of television and this pays homage to that. It is a great design that features Billy and the main characters, along with Courage and CatDog as well. This is bound to make anyone nostalgic.

As we grow up, we tend to look back at the golden years of our childhood. Cartoon shows are an important part of our identities and getting tattoos of your favourite cartoon shows is a great way to pay respect to them. We specially curated this list of tattoos for you guys who want to get tattoos of The Grim Adventures. Not all tattoos made the cut but we hope this list ends your search for the perfect design.

What is the billy and mandy tattoo?

The Billy and Mandy Tattoo is a popular tattoo design featuring two characters from the Cartoon Network comedy series, The Grim Adventures of Billy & Mandy. The tattoo consists of a cartoon version of Billy, wearing his trademark blue hat, and his best friend and sidekick, an anthropomorphic orange monster named Mandy. Together they are shown in a humorous pose, often with Mandy holding up a bowl of candy. The tattoo may also include other elements from the show, such as Grim and various supporting characters.