10 Best Big Dipper Tattoo Ideas That Will Blow Your Mind! 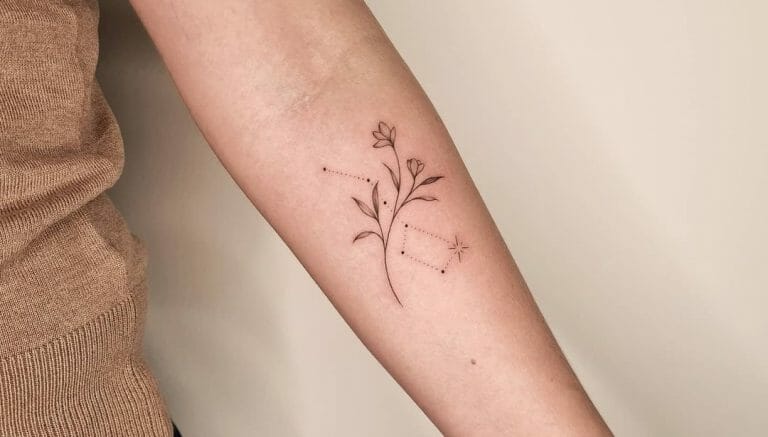 Are you smitten by the grace of the constellations glimmering in the night sky? If yes, these big dipper tattoos might interest the stargazer in you!

The big dipper, named on the basis of its spoon shape, is one of the easily spotted groups of stars that light up the sky accompanied by its counterpart the little dipper.

The ladle-like seven stars are a part of a much greater constellation known as the Ursa Major. If you are a space fanatic, you already know the key to spotting Ursa Major and Ursa Minor is through the North Star, or Polaris- the brightest visible star in the entire sky.

Thus, if you were wandering around vast deserts in prehistoric times, identifying the Ursa Minor would mean the way home. Interestingly, the ancients used several other constellations than the Ursa Minor for myriads of reasons other than direction. They determined their seasons based on the position of the big dipper, for instance, the handle facing the north would mean winter, west would mean summer, and so on. But humans have come a long way from interpreting stars for their day-to-day activities to a more philosophical standpoint. For many, stargazing is an introspective experience where they gain perspective by looking at their existence from the cosmic point. This is a truly overwhelming experience that tattoo enthusiasts tend to etch with constellation tattoos. The big dipper, little dipper, the Orion, the Scorpio constellation tattoo, and some other constellations have been consistent choices for tattooers looking for symbolic meaning for their body art. Read on to find some cool big dipper tattoos that are rich in symbolism and find inspiration for your next ink!

Starting off with an elegant game changer that is bound to stand out in the sea of tattoo designs! Style the seven stars of the big dipper tattoo with a twig of flowers to enhance the beauty of your constellation tattoos. Flowers often project the pattern of the universe with their numerous swirls. Call it Fibonacci or something else but florals are a direct allusion to the cosmic chaos that we inhabit. This subtle depiction of the unfathomable is heavy in its meaning and would present you as a thoughtful being who sees beyond the physical.

If you’re all about minimalism, this big dipper shows how to amp up while being true to your essence. The stars are placed in a queer fashion as though showcasing the life cycle starting with full stature to the seventh falling from the sky. Site this big dipper on your forearm and discover greater depth in the meaning of your tattoos with the least amount of ink.

This big dipper tattoo meaning is again based on the floral-to-universal trope with the inclusion of the mandala patterns and the centrish constellation with the backdrop of a galaxy. The galaxy swirls might also remind one of the fractals that are so inherently conjoined with observable cosmic patterns. The core and periphery of this tattoo move in two different directions but are strongly linked by the underlying theme of its design.

Big Dipper Tattoo With A Bear

Portraying the big dipper in an overall picture of the great bear is both symbolic and adheres to the popular mythology related to its existence. Ursa Major, aka the great bear, finds its mention in Greek myths that tell the tales of the nymph Callisto being turned into a bear by Zeus in order to hide their illicit affairs. Moreover, her son is also believed to have been transformed in the same manner into what we now know as the little dipper. The artist here uses the same myth and fits the seven stars into the posterior part of the bear, hinting at the fact that the big dipper is not really a constellation in itself but rather a part of a whole.

Big Dipper Tattoo On A Mountainscape

Keep your design monochromatic yet worth a statement piece by placing the big dipper tattoo amidst mountains. This style portrays the night sky with careful dotwork that effectively puts focus on the seven stars better than the constellations surrounding it. The tall pines and the ridged mountains further bring to mind the scenic view of the starry night that we all yearn for!

Breakaway from the symbolic meanings and re-discover yourself with some fun tattoos that the whole world is going to applaud! This ethereal tattoo reaches in different directions with the inclusion of an oh-so-cute baby elephant, moon, stars, and of course, the big dipper, producing a body art that is filled with hope and innocence to the brim. These unrelated motifs can produce an off-beat yet self-explanatory design when tattooed in the same context.

Big Dipper Tattoo With The Hand Of God

Speaking of edgy designs, this big dipper tattoo meaning mixes astronomy with divinity. The out-of-place hand seems to grasp at the celestial sphere while the big dipper floats around in the background sky with stardust. Either the hand is of God or of an overreaching human is for the world to interpret, but it will surely showcase your immaculate taste in body art.

Behind The Ear Big Dipper Tattoos

This minimal yet colourful tiny big dipper tattoo is a great choice if you are willing to be tattooed behind the ear. The scarcity of area here demands enthusiasts to delve in different directions and discover some quirky picks for their body art. Here, the second star is replaced by Saturn with a similar interplay between pink and blue throughout. Weighing lighter on the symbolic scale, this tattoo is all about exhibiting the summer sky in a new light.

Artists pick the rhombus for a neat and contemporary-looking frame that encapsulates the entirety of the design without much hassle. Here, this big dipper tattoo meaning strives to portray the physical and mythical embodiment of the grizzly bear while keeping visual appeal sky-high. The detailed dotwork that goes into creating the night sky and the mountainscape is primal for it to spring up from the crowd.

UV ink is best fitted for your big dipper tattoo to shine on your body, literally! The stars would otherwise remain as if amidst a colour splash but when placed under the UV light, the ink would appear to glow where you put it, here shown in the outlines of the stars.

If you are looking for constellation tattoos, the big dipper is a good place to start. With great symbolic implication, the tattoo trope has become quite the hype. Although, tattoo art is entirely subjective we encourage you to take references and experiment with your own design. But if you are still clueless and don’t know where to start, the following is a list of suggestions to help you out: