10 Best Bi Pride Tattoo Ideas That Will Blow Your Mind! 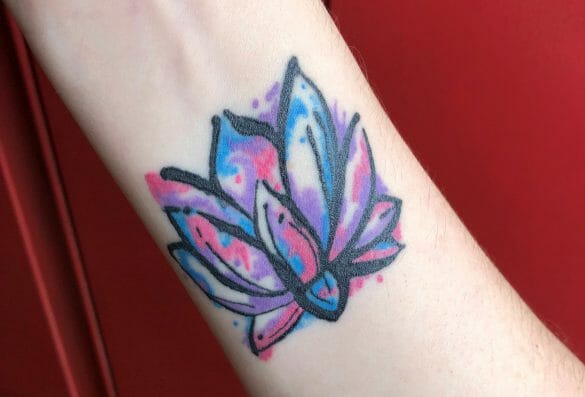 No more hiding in the closet! It’s time for you to wear your pride and shine! Let these beautiful bi pride tattoos breathe into you, more courage and strength.

A bi pride tattoo is not just a tattoo that enhances one’s fashion statement, it carries a sense of liberation and victory for the wearer – the liberation from the shackles of fear of the society and its tyranny towards gay people and the entire LGBTQA+ community.

It’s one step forward to accepting yourself as you are and being proud of it. Getting a bi tattoo is not only triumphant for the wearer, but it’s also inspiring for others, who belong to the community but are somewhat scared to pronounce their sexuality out loud.

Love is love. It goes beyond gender, sex, colour, caste, religion, and everything else. But unfortunately, our society hasn’t been very adaptive to the different kinds of love that exist out there; nor has it shown much tolerance towards the people who they deem ‘different’ from the ‘normal’ crowd. It’s taken the LGBT community years to get where it stands today. The journey was not an easy one, because of the amount of hatred, disgust, and all the other negative emotions queer people have received throughout the years.

Tattoos are not just body arts meant for artistic fulfillment or visual pleasure. They are a mode of expression as well. Your body art featuring the bi flag or the bi-colours are not just bare inks, they are the visual manifestation of your sexuality, as well as your romantic orientation, to a certain extent. You must have had body and face paints made up of symbols, quotes, or patterns representing diverse sexuality during the pride month or while prancing in a pride parade. Then why not get a tattoo that comes with a promise of permanence?

Bisexuality is one of the diverse sexual orientations. It means that a bisexual person can feel sexual attraction towards both genders. In the bi flag, the two genders are represented by blue and pink, and the inclusiveness of them both is demonstrated by the middle stripe – purple. Get a bi tattoo and wear your bi pride colours proudly.

Customize your bi tattoos with different symbols or images of objects incorporating the bi pride colours. For example, this cute fungi tattoo with an exclamatory stare full of innocence is a pretty cool design. While fungus or mushrooms symbolise transformation, this bi-fungi tattoo can be representative of the process of figuring out your sexuality and accepting it joyfully. It’s symbolic of your journey towards finding yourself.

This tattoo is an innovative representation of bisexuality. It’s demonstrating both genders – man and woman through a pen (blue) and a pencil (pink), crossing each other, with the heart symbol (purple) in the background. Add your personal taste to your bi tattoos by incorporating different elements as well.

The flower hydrangea represents grace, beauty, and gratitude. This bi-hydrangea tattoo, as it may be called features the colours blue, purple, and pink in a very pleasant depiction. The reason behind choosing the hydrangea flower might be because of its different varieties that come in blue, pink, violet, or purple – all these beautiful colours.

If you stan Panic At The Disco and take inspiration from Brendon Urie being open and vocal about his pansexuality, then this bi pride ‘sinner’ tattoo is for you. The ‘sinner’ in this tattoo is to refer to the PATD fandom. But if someone wants to get this tattoo without the PATD reference, then the ‘sinner’ can be interpreted in this way – since many regressive cultures see bisexuality or any other sexual orientation deviating from heterosexuality as a sin, the label here fits perfectly as a reclamation of bisexual people’s pride. If they call you a sinner for being what you are, then you gotta turn their insulting tag given to you into a crown and wear it with pride.

The Bi Angles symbol is a long-standing symbol for bisexuality. The most widely-used bi pride flag was originally based on the Bi Angles symbol before adding additional colours. Although most people do not use this symbol because of its association with violence against gay men during WWII, one can reclaim it by getting inked with upward-facing overlapping triangles instead of the downward-facing pink triangle from the Nazi camp. The splash of colours can symbolize the overwhelming impact of finally getting to wear one’s own colours.

This tattoo can have two different connotations. The Greek letter ‘pi'(π) in the original polyamorous flag stands for ‘infinite love’. So, this bi tattoo can mean that the wearer is bisexual with a romantic orientation as polyamorous. The other connotation is that the wearer is ‘pisexual’ – a term used to represent a person who identifies as both a bisexual and a pansexual.

The lotus bi pride tattoo is quite common among bi tattoos, as the flower lotus itself is a symbol of sexuality and sensuality. The flower is drawn using a single line and the three colours are incorporated. It’s a direct message that tells you to embrace your sexuality.

Since the bi angels symbol evokes its association with the downward pink triangle used in the Nazi camp during WW2 to label gay male prisoners, Vivian Wagner, in 1998, designed the double moon symbol instead. This symbol comprises two crescent moons – each with a gradient from the colour blue to pink, creating purple where the two primary colours meet.

In spirituality, the moon is a symbol of powerful feminine energy. So, if you’re a bisexual woman who wants to wear her sexuality with pride, this double moon bi girl pride tattoo would set you free. Flaunt it with joy and pride!

There’s a saying that the bumblebee is bisexual in nature. Bees are courageous insects. Let that courage transfer to your spirit through this bisexual bees tattoo. The bees in this tattoo are seen to be getting out of a jar after probably being held captive in it, which is symbolic of finally setting one’s sexuality free after remaining hidden in the closet.

The unicorn has often been considered a symbol of the LGBTQA+ community because of its association with the rainbow. This self-love bisexual tattoo features a unicorn bathing in the bisexual colour splash. Before coming out to the world, you need to accept your sexuality. That’s the first step. Once you feel comfortable and confident in your sexuality, you take another step towards self-love. This tattoo has portrayed it quite beautifully. The individual symbolic significance of a unicorn enhances its meaning all the more. The journey of finally coming to terms with one’s sexual and romantic orientation and finding more like-minded people has truly been magical in the LGBTQA+ community, as queer people upon discovering their different preferences feel isolated at first. But strutting down the street during the pride month, September with a bunch of other people who are as unique and queer as you must feel wholesome. Let your LGBT tattoos flow free and wild amidst the crowd you don’t have to walk away from.

There are plenty of rainbow tattoo ideas on the internet. The latest version of the rainbow pride flag might have incorporated some more colours to it. You can check out pride tattoo-related articles to find out the latest versions of each flag so that you don’t get them wrong. Meanwhile, explore some of these gay tattoo ideas: