10 Best Beholder Tattoo Ideas That Will Blow Your Mind! 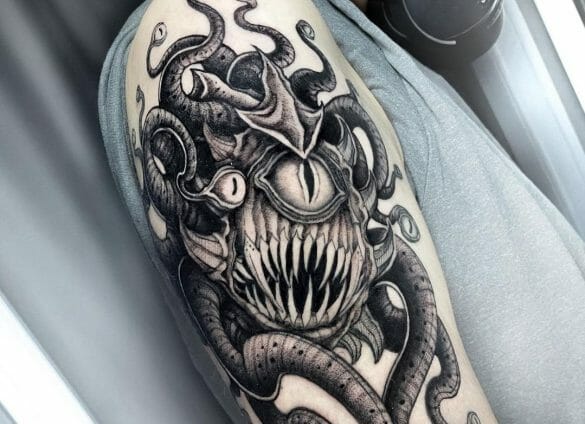 If you dote on Dungeons and Dragons like no other, why not get to inking? Here are some awesome beholder tattoos that you need for a badass piece of art!

Beholder, the monstrous blob of DnD, is getting all the hype from the tattoo industry and for all the right reasons!

With Dungeons and Dragons practically ruling over the cult of role-playing gaming, beholder tattoos are the new trend that Twitter is talking about. The beholder with its glistening eye and multiple tentacles has been a sign of danger whenever we have encountered the creature, but surely the tattoos are much simpler than dealing with the beast itself.

DnD is an iconic blueprint for the trending fantasy fictional show Stranger Things and many others that proudly showcase their inspiration starting with the characters, background, and kick-starting with gameplay. Thus it is no wonder that the interest in DnD tattooing has spiked up in the past few years. However, tattooing a beholder is fairly simple. You need immense love for the game and a quirky personality to ward off creepy first impressions. Jesting apart, the beholder will take the popular art of monster tattooing to a whole new level. If done right, the creature can even produce some beautiful DnD tattoos that you will ever see. Read on to find more information on styling the beholder in your garb!

This monochromatic beholder sits snugly on the skin with its numerous tentacles enclosing half-glancing eyeballs. The beauty of this tattoo lies behind the intricate shading and dot work that goes into creating a major chunk of it. The cobwebs hanging below its gigantic mouth also helps in increasing the threat factor that you have almost surely felt during such an encounter.

Play along with colours and get your beholder to pop up like no other! The artist here uses shades of pink, purple, and turquoise to bring out a fantastic contrast that goes too well with the black outlining. Beholder’s gigantic mouth is rather mellowed down with a reduced number of teeth and the creepy quotient. You can opt for such contrasting colours and set them on your limbs for a good chance of exposure.

Adhering to the original stature of the beholder, this tattoo adds a touch of contemporary with the idea of colour blocking. The bright orange and green offer a different edge to the monster while at the same time creating the antimagic ray for the beholder to place its target. If you are a fan of neo-traditional, pick such awesome colours to style your beholder tattoo.

Green is perhaps the staple of every monster and the eye-tyrant is no different in this case. Note the way the beholder gazes with its bright red eyes and the addition of extra teeth below its jaw. These elements along with the interplay between purple and green will definitely highlight the blob in your tattoo collection.

The artist here takes a realistic approach in styling the beholder in its levitating state, glaring at its attack and preparing to make the next move at any moment. Surely a petrifying scene in the gameplay will make an awesome addition to your skin that you will love no matter the placement. The black scribbly background helps to provide a 3D illusion to the red hot beholder and its messy garb with black veins.

A seemingly simple thing, this beholder is a master of trickery. Overall coloured in green, the core of this tattoo is a beautiful and quite trippy a transition. The eye and mouth of the creature are brilliantly shaded with pink, blue, and yellow. The colours may seem unrelated and out of the place but serve to draw attention to the hidden eye in between its teeth- an artistic addition that paves way for more experimentation. If the outcome is so eye-catching, these tattoos are worth all the wait under the needle!

A remnant of the early illustrations of the beholder and DnD tattooing, this chest piece is here to take your love for DnD to a whole new level. Until now you have encountered pieces, but here is an inspiration for you to learn from and experiment further. This mesh of a design throws you back to the dungeons lurking with terror. The two participants with tools are aptly placed in the two extremes with the beholder in the center. They could win or be a victim of the monster, but for you, this tattoo will only mean a game-changer spiked with nostalgia. We would suggest keeping this tattoo in black for an awesome contrast against the skin.

Beholder D&D Tattoo With A Twist

This D 20 beholder tattoo is here to jog your memory about the rules that govern the adventure. The D20 dice is primal to the gameplay and the mishaps, too. The artist here fits the beholder in the D20, forging a novel way of tattooing the creature. The spikes of the purple monster along with its eyes both lure us into the game while dreading the upcoming happenings. Your arm is the ideal place for tattooing such a beautiful yet gnarly dice.

If you don’t prefer colours so much, apply just a tinge in the eyes to highlight, as is shown here. This belly tattoo is an age-old illustration but with a modern reboot. Fine shading and intricate linework further accentuate the lethal glare, daring anyone to pass.

Beauty Is In The Eye Of The Beholder Tattoo

Quite a humorous take on the dreadful monster, this beholder is an epitome of beauty with over-the-top eyelashes and an adorable gaze. The overly used quote here is rather a funny remark in the context of DnD, yet can be read as a riddle luring you to find true appreciation for beauty by traversing through the dungeons. Such a caricature of the ‘beauty is found within’ tattoo trope can make a real head turner among DnD fans!

Acting as a model for the popular culture, it is no wonder that DnD tattoos are again up in popular searches. Beholder tattoos are back in the game and are perfect for both men and women. Tattooing a beholder will not only showcase your love for the franchise but also regard you as a person who is unafraid of displaying their rad self. Now that you are well-equipped with details, the following are some suggestions that will agree with your love for DnD and help get you inked ASAP: