101 Best Behind Ear Tattoo Ideas You’ll Have To See To Believe! 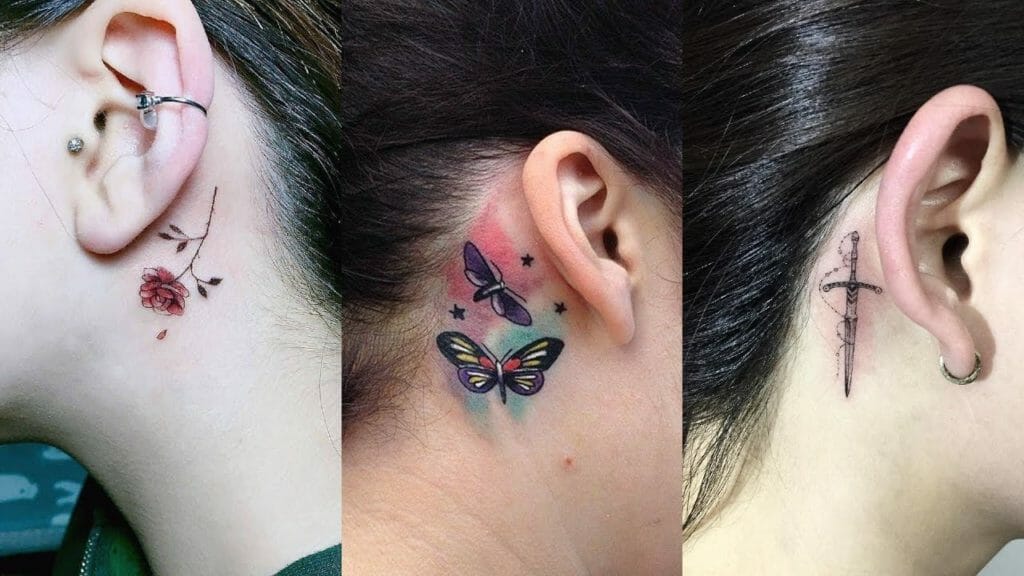 Are you looking for some of the best behind the ear tattoo ideas in order to get a tattoo inked behind your ear? Then you’re in the best place, because we have the best ideas for you!

Getting behind the ear tattoos is a trend that has slowly been on the rise for the last couple of years .

Due to the fact that ear tattoos hurt a lot, most people prefer to get really small versions of designs that they love. Ear tattoos generally utilise less ink than larger tattoos in other placements do.

There are many great ear tattoo designs you can get imprinted on your body, such as birds, flowers, skulls, musical notes, butterflies and stars. These tattoos could be fresh tattoos on clean skin, or they could be used to cover up older tattoos. Unfortunately, in some cases when it is a large tattoo, it can be considered unprofessional. In other cases, smaller tattoos can pass by without seeming unprofessional. However, this is dependent on the workplace. A behind the ear tattoo can sometimes mean that the individual has lost a loved one and they’ve gotten a tattoo to commemorate them. These tattoos can be percieved as feminine, however both men and women sport behind the ear tattoos. A great reason to select a tattoo behind the ear is because it is generally small, dainty, and it allows you to express yourself without greatly impacting your general body and appearance. You can also easily ask an artist to cover any ear tattoos later on if you desire.

Tattoos behind the ear are often subtle and unique. They can be big or small and they are usually cute. For instance, this is a beautiful tattoo of swallow mid-air, a great option for both men and women. Birds are known to symbolize freedom, vision, and the future. This is why bird tattoos are extremely common. Since these tattoos are behind the ear, they can easily be hidden with long hair or a head wrap by women who wish to conceal their tattoos at the workplace. It might be harder for men to be discreet about their tattoo, however, one way to conceal a tattoo like this is just to get a smaller design. Generally, one should look into the policies of their company or workplace before committing to any tattoo that will easily be visible. Tattoos behind the ear tend to be a little more painful since the skin is very delicate and tight and there isn’t a lot of distance between the ear and hairline. Getting a dove tattoo is currently very popular since doves represent love and peace.

Star tattoos are very popular, especially among younger generations who love the look that they provide. Star tattoos that are placed behind the ear don’t need as much aftercare as bigger and more elaborate tattoos do. They also are a symbol for guidance and protection. Just as shown in this tattoo, three star combinations are very popular. Some people also prefer to get bigger combinations, like 5 stars, or 7 stars, that are smaller in size. Getting one slightly bigger star is also an option that many choose. The smaller the tattoo is, generally the lesser pain one has to endure. Just like this design, there are also a lot of other great minimal star tattoo designs that go behind your ear. If you want to brighten up your life or someone else’s you can totally consider selecting or suggesting this type of design!

Butterfly tattos have become increasingly prominent over the last couple of decades. They often symbolize the process of transformation that one has to go through to get to the person that they end up becoming. Just like a caterpillar transforms into a butterfly, babies transform into adults throughout their lifetime. Butterfly designs also signify growth, happiness, and freedom. As shown in this tattoo, one could choose to get a pair of small butterflies tattoed behind their ear. This design doesn’t use a lot of ink since there isn’t a lot of shading involved and the designs are pretty small. Other design options also include getting one butterfly that’s slightly bigger, getting a line of small butterflies, getting colourful butterflies, or just getting a simple minimalistic butterfly design in black similar to this one.

Most people identify with their zodiac symbol on some level, even if they don’t believe in astrology. In total, there are 12 zodiac symbols, each relating to a house in astrology. An individual’s astrological sign is dependent on their date of birth. The 12 houses are Aries, Taurus, Gemini, Cancer, Leo, Virgo, libra, Scorpio, Sagittarius, Capricorn, Aquarius, and Pisces. This design depicts an extremely intricate and detailed coloured version of the Sagittarius symbol behind the person’s ear. Just like this tattoo, you can get your astrological sign tattooed behind your ear. Depending on your personal preference, you can decide the area and size of the tattoo. Since your zodiac symbol is something that is permanent, this type of design will not really go out of style.

A Roman numeral behind an ear tattoo is not just significant because of the language, but also because of the significance behind the number. Having a significant date inked behind your ear is a really special way of remembering and commemorating a specific moment in time. Since most people choose to have tiny numbers on their wrist or ankle, choosing a unique place like behind the ear will only make the tattoo cooler. Just like this individual has chosen to place certain numbers behind her ear, one can choose a special date such as a birthday, anniversary, or any special day to get tattooed behind their ear. Since Roman numerals are comparatively easy to create than other complex designs, it is fairly easy to find a good tattoo artist in any city who can do this design. The best way to take care of a tattoo behind your ear is to clean it gently, then pat it down, and add an aftercare balm for tattoos or any good unscented lotion.

Flowers are some of the most sought-after designs in all the entire art form. There are many types of flowers one can get such as peonies, lilies, sunflowers, roses, and daisies behind the ear. Flowers are overall often a symbol of beauty, power, and positivity. However, each flower generally has its own specific meaning, so one can select according to one’s personal liking. People who love roses can opt for a design like this, which features a small rose that is really well detailed. The shading on the petals and leaves gives it an added layer of texture and make it really pop and come to life. The extra detail also makes the rose more visible and adds vibrancy to an otherwise black and white design. People who have extra sensitive skin or those who wish to avoid pain can go for a more minimalistic version of their chosen flower. It is also possible to get a flower ear tattoo in its original colour, which makes this design so exciting! If you’re someone who is attracted to flower designs, you can also consider getting a music note inked if music is also one of your interests. Delicate flower designs are good options for both men and women.

For a unique option that looks really personal, you can select a design that shows the different phases of the moon on the back of your ear. The process of waxing and waning resembles the flow and ebb of the tide or of energy, and is a really trendy tattoo to get. To get look at other style ideas such as the this one, where the client has gotten cute and tiny moons behind her ear, you can look at various social media applications. Moon tattoos such as this one are also great for people who don’t want a painful tattoo because of sensitive skin, since it is minimalistic and doesn’t use a lot of ink. Other options for moon tattoos also include tattoos that are filled in, crescent tattoos, full moon tattoos, blood moon tattoos, and blue moon tattoos, which can all look really attractive and cute behind the ear.

If you are on the search for a tattoo that looks hip, animalistic, and meaningful at the same time, then you should give snakes a chance! While large snake tattoos may be exceedingly common, they definitely demand a lot of aftercare. A good alternative is to get a small snake tattoo such as this one that can communicate the same ideas that you want, be a nice art piece, brighten up your life, and not give you as much pain as a bigger tattoo could. Since your eras and the skin behind it is an erogenous zone, getting a tattoo in that space can sometimes be extremely painful. Therefore, a lot of thought should be given to the kind of tattoo design and size you end up choosing, as well as its placement.

Warrior ear tattoos are slowly gaining popularity among men. If you want a tattoo that represents strength, valour, and courage, you can opt for a piece like this, which showcases the helmet of a warrior. While it may look simple, the exquisite finishings and beautiful colouring make this ear tattoo really stand out. A tattoo like this one, which is unique and simple can add an extra layer of allure to your appearance. The warrior design could be placed anywhere on the skin, including arms, legs, forearm, chest, and back. The placement and thereby the size of the tattoo will really affect the amount of aftercare required and the amount of pain that is received. Warrior ear tattoos are not just restricted to men, women can also get them too. An additional aspect is that it might be easier for women with long hair to conceal ear tattoos.

Skull ear tattoos are also a great idea if you don’t want an old tattoo to be visible and aren’t able to hide it behind your hair. They can be extremely detailed or simple, and glamorous or plain, depending on your taste and preference. If you want a behind the ear tattoo that is going to make for a good conversation starter, you should definitely consider a behind the ear tattoo in the shape of a skull. A slightly large skull tattoo could also easily cover a small tattoo that is not taking too much space. Skull tattoos are relatively common, therefore it is generally easy to get a tattoo artist that can make a skull tattoo with minimal pain. Other than that, you can also customize different skull ear tattoos with your own ideas. Skull ear tattoos are generally black, but you can choose to get them in a different colour. People who like this type of design can also consider getting religious ear tattoos such as a cross inked on their skin. A cross often goes along with the skull in many designs.