101 Best Bear Tattoo Ideas You’ll Have To See To Believe! 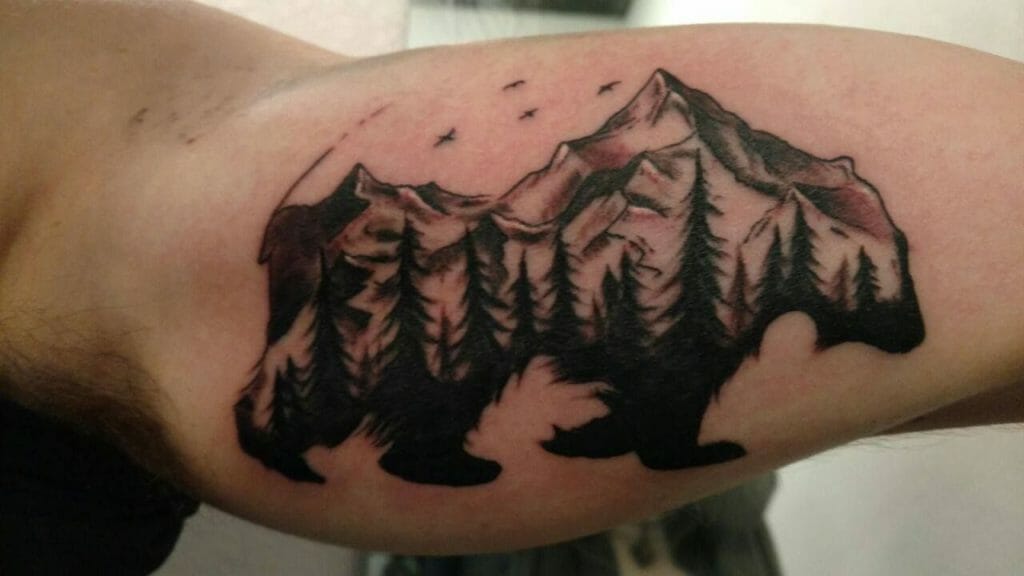 Bears are mostly seen as silent animals unless provoked when these cute and adorable animals quickly turn into aggressive beings!

In Native American cultures, bears are often associated with protection, spirituality, courage, trust, and endurance. Bears also symbolize a deep connection with nature as the native Americans believed that bears are a gift to mother earth and her people.

Bears have been believed to be one of the most powerful land animals and have paved the way for spirituality, fierceness, and many life aspects in various cultures and countries. For example, in ancient Scandinavian cultures, bears were associated with God, as the Gods gave the power of this animal to humans in wars. In Indian culture, bears are associated with mystical healing powers. In ancient Egypt, the bear spirit was believed to outline authority and privilege.

Bear tattoos on men are usually portrayed as a sign of ferocity and aggressive behavior towards people who intend on harming the person or their family. Bear tattoos on women are used to show the power of perfectionist motherhood and the heights they can go to provide protection and love for their children and family.

This amazing Grizzly bear tattoo oozes power to the maximum as it is a great example of a tattoo that can be seen as a sign of power and confidence in the person who gets inked with this piece of art! The fierce outline of the bear’s head brings out the wild nature of the tattoo.

The idea of this bear tattoo is to instill a sense of confidence and a connection to the body and mind. The outline of the tree and the bright sun behind the face of the bear gives a cool and timid feel to the tattoo.

Due to the large size of bear tattoo designs like these, the placement is best suited for the chest, legs, forearm, or back of the body.

Aggressive Bear Tattoo For The People With A Wild Side

Bear tattoos like this one are the perfect way to unleash your inner demon to the world and come off as an absolute badass. This completely black tattoo portrays the bears’ ferocity and dangerous nature of the person who has this inked on their body!

The bear symbolism in this tattoo is open to interpretation as it can convey the idea of being put down by the world from all sides or warning people around you that they should not wake up the sleeping beast.

The detailing on this tattoo shows the amount of work put into it by the artist who has drawn the creature well enough for many different aspects of the art to pop, such as the bear paw, fur, arrows, and the ferocious face!

If you ever get bored looking at grizzly bear tattoo designs or tattoos of brown bears and want something new for a change then this cute teddy bear tattoo is the best choice for you! The color tone of the design instead of the normal black and white design is a welcome sight for something new and unique. The ink used in the design of this tattoo has a rusted effect to it to show off the wear and tear to the head of the teddy bear in question and the large industrial pipes and cogs add to the steampunk nature of this tattoo.

If you are a person who wants a low-key cute tattoo instead of the usual aggressive animal tattoos then bear tattoos like these are the best bet.

Due to the size of bear tattoos like these, the best placement for them on your body would be the arm sleeve, forearm, chest, back, or inner or outer thighs.

If you are looking for a full-size body tattoo then bear tattoos like these are your best bet. This bear tattoo is filled to the brim with an amazing art style that captures the world of the ferocious brown bear! This tattoo is a mixture of color and the common black and white outline. The ink used on the bear and its surroundings makes the creature pop. The deep black paw and the claws give the tattoo a wild look. The black and white mushroom patches in the design help the tattoo stand out from the bright design.

This simple yet artistic grizzly bear tattoo is a great example of a tribal bear tattoo design for the people who want to pay homage to the lifestyle of the Native Americans. Tribal bear tattoos like these are used to symbolize the beliefs of the indigenous people who believed that bears are a gift to the world from the gods and are seen as a sign of spirituality in nature and life.

The design of this tattoo is simple with the face of the bear being the main selling point, the headdress with feathers, and the symmetrical design under the head adds more depth to the tattoo.

The placements for medium-sized bear tattoos like these are best for the forearm, arm sleeve, shoulders, or legs.

Just because it’s a bear tattoo doesn’t mean it always has to be fierce-looking! This adorable panda bear tattoo follows a neat and intricate design that keeps the design clean as they come. The outline of the panda is well done with black ink that follows the normal color tone of the animal. As we all know, bamboo shoots are the major source of food for these animals as it can be seen in this tattoo as the panda munches on the bamboo nonchalantly.

If you are someone who wants to show off their nonchalant and free nature, then this tattoo is the best for you! Thanks to the small-medium size of this tattoo, the placement for this tattoo can be on the arm sleeve, legs, or shoulder.

In the case that your spirit animal is a polar bear, then this tattoo is the perfect fit for you. Polar bears are used as a sign of independence and self-trust and the ability to survive even when things get rough. Polar bears are also used to signify determination and survival skills as these animals are a vulnerable species in the wild. They are rare too and if you have been a fan of Philip Pullman’s series or ‘The Golden Compass’, you’d love this.

The design of the tattoo is simple yet appealing as it takes aspects of the animal’s wildlife and puts it in a sign that is easy to understand. Half of the body of the polar bear is normal and half is covered in blue ice, almost as if the artist wants to say that the bear is coming out of hibernation or is coming out of its shell to face the world. The interpretation of tattoos like these is open and can be whatever you want it to be!

The placement of this tattoo is best suited for the back, chest, arm sleeve, or shoulder.

Nothing says sweet like a teddy bear! This sweet little tattoo is perfect for couples who want to portray their love to one another in the form of a tattoo. The minimalistic nature of this tattoo is suited best for people who want a tattoo that doesn’t stand out much and is easy on the eyes for its design and size.

The portrait of the small teddy bear couple is simple with no color added to it. The small size of this tattoo is another plus point as it can be inked on any part that you want. Tattoos like these are best on the arm, neck, legs, shoulder, arm sleeve, or wrist!

Show your love towards your significant other with this sweet tattoo that is certain to please and amaze them.

Badass Black Bear Tattoo For The Rebel In You

If you are looking for a tattoo that will reflect your calm yet fierce character to those around you, then this tattoo is perfect for you.

This amazing piece of artwork brings together all the aspects of the wild mannerism of the bear in their natural habitat. The portrait of the bear with its jaws wide open and sharp teeth shows how the beast can be when it is aggressive. The antlers at the top add to the mysteriousness of the tattoo. The third eye on the bear is used as a means to represent insight and mystical intuition, or in simple terms, it portrays enlightenment and inner vision, beyond what the physical eyes can see.

This symbolism is used in many forms of art to add a sense of spirituality. The sharp bear claw and the large jaw are all done in black which gives this tattoo an extra punch of ferocity and sharpness. Owing to the artistic aspect of this tattoo, you can either keep it black or get it filled with color as the choice is up to you.

Astonishing Bear And Wolf Tattoo For The Fighter In You

We saved the best for last! This absolutely astonishing tattoo is an amazing piece of art. The demonic representation of both the wolf and the bear gives this tattoo a mesmerizing feel.

Just like bears are symbolic in many parts of the world in folklore or among indigenous people, wolves are also symbolic in many cultures. Wolves are a symbol of loyalty, ritual, and guardianship. They come with a sense of self-trust and are known for their firm emotional attachments as they teach us the same, which results in us trusting our soul and keeping control of our lives.

The tattoo is filled to the brim with details that help us understand the wear and tear that both the animals have gone through in their lives. The dagger in the wolf’s mouth alongside the broken spear in the bear’s mouth is an interpretation of the hardship that one goes through in life. The bright red eyes on both sketches add to the badass look of this tattoo.

If you are willing to flaunt it, then this is the best tattoo that you can get inked with because of how ruthless and badass it looks.

There are many other bear tattoo suggestions that you can choose as well. They are: