10 Best Barber Tattoo Ideas That Will Blow Your Mind! 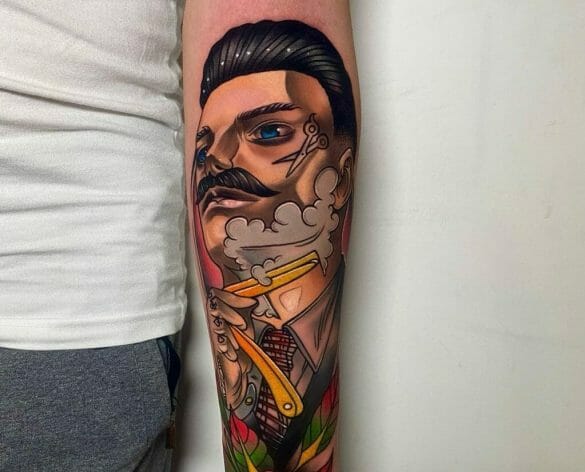 Bored with tattooing common designs, then you should try the barber tattoo for a change which has quite a unique and cool look.

If you dive into history then you will be amazed to know that the concept of hairdressing or barber service started during 5000 B.C. in Egypt.

Believed to be introduced in Rome in 296 B.C. barbershops became a place for gossip and daily news. It also became an important part of the Greek lifestyle just like the public baths.

Derived from the Latin word Barba which means beard as time went by barbers even performed surgery and dentistry around the world other than hairdressing. The first major change came in the twentieth century when barbers started to only groom hair and beards. It broke off from the branch of cosmetology and became a well-paying profession. In modern times with the styling of hair and beard, guess what the concept even has been imbibed into the tattoo world.

A simple barber tattoo is done by using the tools a barber uses for grooming their clients. Comb, razor, scissors, and trimmer are the objects that are done in black ink for this tattoo. Each object has its own purpose of use and that is the exact meaning reflected by the tattoo design.

The best places to put these tattoo ideas are on the forearm, bicep, chest, thighs, and back. This tattoo is a popular choice among men and can be done by a person who is himself a barber or owns a barbershop. It can be also inked by anyone who loves getting their hair and beard done neatly and respects the profession of barbers.

Multiple colors of ink are used to do this colorful tattoo. The tattoo consists of the image of a man who is using his tools to groom his client or himself. Other additional objects like shaving foam, aftershave bottles, or flowers can be further added to highlight the tattoo.

The size of the tattoo ranges from medium to large and the best place to put them is on the forearm, thighs, shin, calves, bicep, and back. Here the tattooer can represent that he is proud of his profession or sometimes can portray the fact that he likes to do his grooming with his own hands.

If you are a fan of Tim Burton then the character of Sweeney the demon barber played by Johnny Depp must be known to you. Here Sweeney is framed for a crime wrongfully that he did not commit and was imprisoned. He returns and vows vengeance on the person who has framed him and starts killing his customers with his razor.

The setting of the movie shows nineteenth-century London and the profession of a barber can also be seen through the movie lens. The corruption of Victorian society is also highlighted in this movie. The one who gets the Sweeney tattoo done is either a fan of Tim Burton or Johnny Depp or loves the Victorian concept of a barber. The best place to put this drawing is on the calves, forearm, thighs, back, and chest.

From a barber shop owner to a working barber who is proud of their profession mostly get the barber word tattoo done on their body. Black ink is used for these tattoos and is mostly popular among men. The word barber can be fused with other objects like a scissor, comb, razor, trimmer, or pole.

Tattooing these looks extremely cool and people understand instantly the profession of the tattooer. The best place to tattoo them is on the head, wrist, finger, forearm, bicep, and shin. It takes years of practice and follow-up to learn the technique of this artistry and hence is a great tattoo of choice.

Cutting hair and shaving the beard is a work of art and without quality work, a barber just like a tattoo artist is not recognized as an efficient one. Popular barbershops are known for their quality work and clients have to make an appointment before getting a haircut. Just like artists, they take a few hours to show their magic with scissors and combs.

From making appointments to getting hair done the concept of time is very important here. For this reason, many people get a barber tattoo with a clock. The clock here not only shows the importance of time but it can also show that just like other professions if you give a barber a proper amount of time they will make you more attractive with their grooming skills. The best place to put these tattoos is on the forearm, shin, calves, bicep, and back.

Small tattoos are becoming an extremely popular choice in the tattoo industry. It is natural that small tattoos relating to barbers will also be on the rise for their uniqueness. Now when these tattoos are inked by anyone mostly the tools in the barber shop are used as tattoo ideas. They can be either done in traditional black ink or colorful ink and totally depends on the tattooer.

The best places to put these tattoos are on the wrist, ankle, fingers, neck, back of the ear, and forearm. Tattooing the tools can be done in a variety of formats, like a single tool including a razor, a scissor, or a trimmer can be tattooed. Again two tools can be done in combination like a scissor and a comb, or a razor and a scissor. Though these tattoos are small in stature yet they can be extremely loud in a subtle manner.

Just like a painter cannot do their painting without their fingers it is impossible for a barber to cut hair or shave a beard. This is the first thing that is represented by the finger barber tattoo which is mostly done using black ink.

Barber shop tools which include the scissor, comb, razor, and trimmer are mostly tattooed on each finger to represent the profession. The tattoo can also be the sign of an expert barber who has mastered the craft with years of practice and follow-up.

While passing by a barber shop or opening to enter it our attention often goes to the barber pole with predominantly white, red, and blue stripes. Now many people do not know that these stripes are a sign and have a rich history. The best place to put these pole tattoos depends on the size of the tattoo.

The white and red stripes on the tubes represent bandages drawing the concept from earlier times when barbers used to perform surgery and dentistry. Sometimes white, red and blue are found on these poles which is a homage to the American national flag. These tattoos are done mostly with colorful ink and are put on the forearm, wrist, bicep, calves, shin, back, and thighs.

Around the world, in many places, local barber shops still use only scissors, razors, and combs for getting the hair and beard done. They do not use modern technologies and love their traditional tools for their profession.

Popular mostly among men the one with the traditional barber tattoo design wants to show that they love the old methods more than the new ones and wants to stick with that only. The best area to ink this tattoo is on the forearm, bicep, chest, shin, and back.

Many people can get puzzled by this weird-looking tattoo but it is probably one of the most unique and layered meaning drawing one can get on the skin. Mostly done with black ink this tattoo can be created with an eye inside a hand holding scissor, trimmer, or razor, or can be done by putting the hair grooming tools in a triangle manner keeping the eye inside that triangle.

Cutting hair and shaving beards for clients can take hours just like a beautiful painting. The barber has to pay close attention to getting the haircut or beard done right just like a symmetrical tattoo. The eye represents this attention to detail done by barbers. This tattoo is like a homage to the mind and driving force of the creation of a beautiful work by the barber. The best place to put these tattoos is on the forearm, wrist, shin, bicep, back, and chest.

Like the earlier times, a barber shop is still a place of social interaction but now with the implementation of modern technologies the shops are turning into saloons.

The other designs that can be done using the barber concept are: