10 Best Banksy Tattoo Ideas That Will Blow Your Mind! 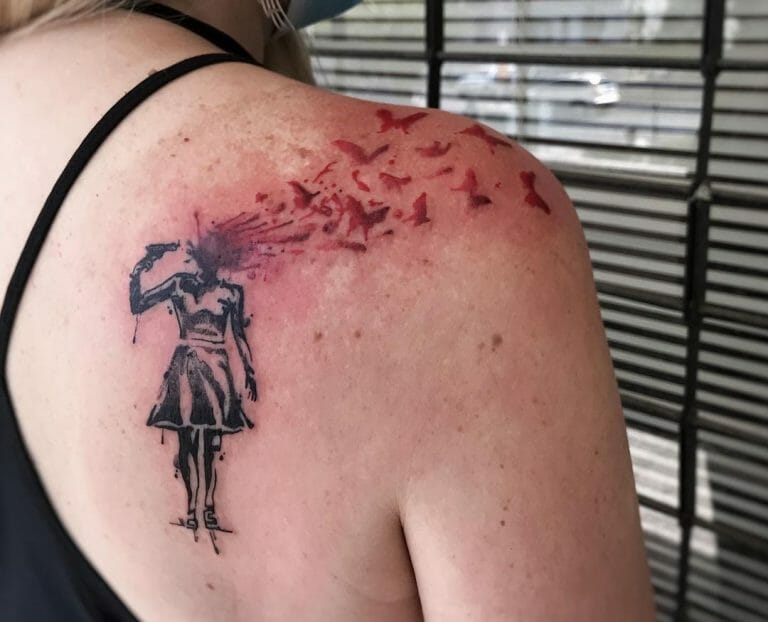 Are you a fan of street art? Check out this list of tattoos inspired by the famous graffiti artist Banksy that is sure to fascinate you!

A Banksy graffiti is like the Picasso painting of the street art world.

This anonymous street artist from Bristol is famous amongst lovers of street art all over the world. If you like tattoos that speak of important issues, tattoos inspired by Banksy’s art is a popular choice.

Born in Bristol, Banksy is a graffiti artist whose artworks took the city by storm in the 1980’s. His revolutionary art has appeared on the streets of London, Los Angeles, New York, the Berlin Wall as well as the separation barrier on the West Bank in Israel ever since.

What is Banksy tattoo meaning?

Banksy’s art is well known to compel the viewer to think about important political issues that have broken our society such as war, vandalism and violence. The graphic images are created with the help of stencils in different colours. Apart from England, his work has often appeared in places torn apart by war.

Banksy’s art is famous for the elements he uses to create that added effect. His images often depict violence and love at the same time which really compels you to stand and think about the message Banksy is trying to convey through his art. The famous images created with Banksy’s stencils include the little girl with the balloon, the woman shooting herself in the head to release a cluster of butterflies and the man throwing a bouquet of flowers instead of a bomb. Humans have a tough time making sense of the emotions of love and hatred. Banksy attempts to make sense of it through his art.

This is perhaps one of Banksy’s most iconic creations. The image of the little girl with the balloon depicts her innocence without using any words. The best part about this tattoo is that it has been made separately on both the legs and the who look is complete. The heart balloon symbolises universal love being spread by the innocence of a child and is truly captivating.

This famous Banksy street art is perfect for body art as well! Banksy tattoos always come with a message and this one is no different. The tattoo is perfect for the shoulder area as depicted in the image. It has a feminine look to it but can be a tattoo option for people across genders. The young girl is pictured shooting her head with a gun and the burst of blood is depicted by using a cluster of red butterflies that adds a dramatic effect to the tattoo. The tattoo symbolises how our thoughts should be free and released into the universe instead of being caged in our brains.

This is another tattoo inspiration from the unknown artist’s arsenal of street art. The fallen angel is depicted to be a little boy on his knees making a silent prayer. The image is symbolic of hope and is tattooed right below the ear. The wings and halo of an angel have been added in bright red to the image of the boy and makes for a bold contrast.

This Banksy tattoo is offbeat and quirky. The street artist has truly outdone himself in this graffiti of a rebel getting ready to join the revolution as his mother helps him out. This Banksy graffiti has a powerful message just like the rest. The shading on this tattoo is intense and dark. The red scarf tied across the rebel’s face is bright red and makes for a nice colour pop on this tattoo.

This is one of those Banksy tattoos that can be recreated by any tattoo artist. This is Banksy’s satire at its best. The graffiti recreated as a tattoo depicts an ape with the caption to keep it real. It is symbolic of mankind’s true nature and how despite all these years of evolution, we still respond to our animal instincts.

This tattoo has been adapted from one of Banksy’s iconic images from a London street. The full street art can be seen in the background. The tattoo depicts coloured rain falling over a little girl who is enjoying the rain and soaking it all up. This tattoo is multicoloured and the girl has been inked with a hot red shade that sets it apart from the other tattoos of this type.

This is an adaptation of another one of Banksy’s epic creations. The original graffiti features an angry man throwing a bouquet of flowers at a wall. The tattoo depicts a young woman with her mouth covered doing the same. The sketching on the tattoo is unique and the shading has been done using straight lines.

This is one of the coolest Banksy tattoo inspirations out there and is symbolic of the fact that love knows no boundaries and defies all logic. This monochromatic Banksy tattoo is truly one of a kind. The shading on the mermaid scales is beautiful. Make sure you hire an experienced tattoo artist for this one.

This tattoo is a great specimen to showcase Banksy’s unmatched genius. The little boy screaming for attention gets no likes or comments from anyone because everyone is too busy on social media. The colour palette of this tattoo is quite unique. The orange bar on top depicts Instagram and the teal of the child’s sweater makes for an interesting colour combination!

This is one of those perfect Banksy tattoos for the corporate couple always busy on their phones. The tattoo speaks volumes about modern-day couples and their relationship with each other. There is topical intimacy but no real connection. The tattoo is monochromatic and has intense shaking.

If you are still looking for more tattoos inspired from Banksy’s art, check out the list below: