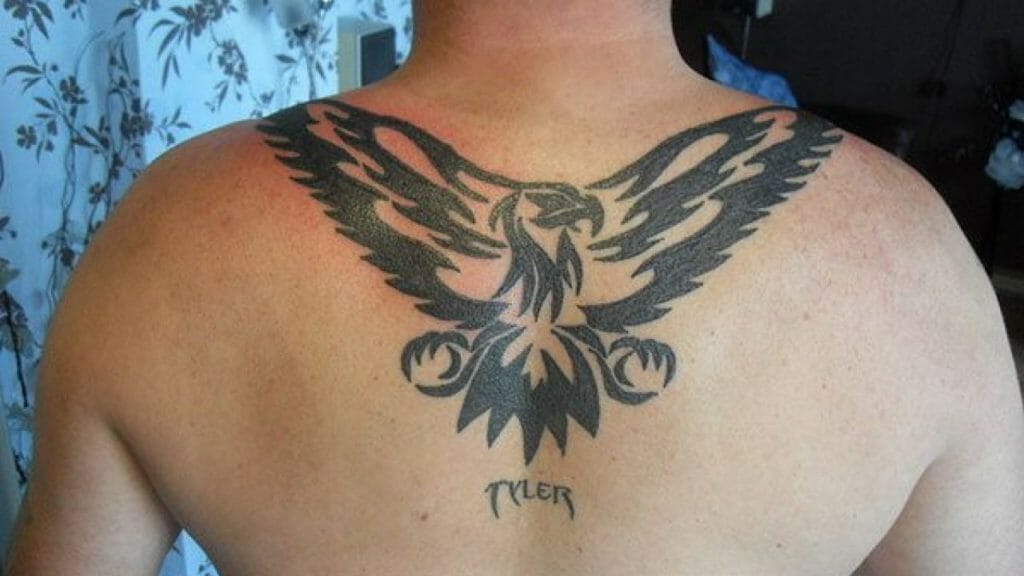 Looking for some amazing bald eagle tattoos to amp up your confidence? This list of tattoos is rich in meaning and can be of help!

The eagle is the national bird in America.

Bald eagle tattoos are awesome, sometimes realistic but always bold. Given below is a list of 10 such tattoos that will help you find the best bald eagle tattoo design to suit your personality.

The American traditional bald eagle tattoo is one of the most famous tattoos amongst military personnel and it is also worn by an ex-military official to show respect to the country.

You can amp up a traditional bald eagle tattoo by adding the beautiful white and red stripes of the American flag in the background. That makes it a true American emblem.

It is recommended to focus on the upper part of the eagle while inking this on the body. The details on the eagle head and the beautiful feathers should be intricate.

This tattoo, for sure can be a style statement!

If you are looking for a tattoo that shows your love for the country, this might be the perfect one for you! This particular tattoo design though being patriotic can be experimented with in many ways.

The white head of the eagle can be mixed up with shades of red and blue which symbolizes the colour of the American flag. You can even have the American flag spread out in the background of an eagle in full flight. With intricate details, this eagle tattoo can turn out to be quite realistic and intimidating!

This bold representation of the American flag tattoo, mixed with bright colours, can make it even more striking. The minute details on the white head of the eagle pop up and the American flag drape the background with a patriotic twist. This bold image brings out a kind of spiritual freedom.

The best place to ink this eagle tattoo is either on the chest or the back as it requires a large surface area to work on.

Tribal tattoos have always been seen as a symbol of great power and courage by tattoo lovers. Some people even consider these tattoos to have spiritual connotations. Tribal eagle tattoos carry their inner meaning behind the style of tattoo – intricate designs and minimal dark clean lines can bring out the fearsome quality of the bald eagle.

The eagle in these tattoos is seen in full flight and in an attacking position – a determined sense of preparedness. The minimalistic approach makes it stand out from the rest.

This particular tattoo though is in the same tradition yet the slight use of yellow in the beak and the eye of the eagle along with the thick black outline makes the eagle look focused. If you are looking for a bald eagle tattoo but with a twist, this can be a great option. Every time you roll up your sleeves, the tattoo will let everyone know how confident you are in life!

A bald eagle tattoo can also have a fun approach. This bald eagle tattoo has a cartoonish approach but it keeps the art realistic with detailed wings and a lovely shade of black. In this tattoo. the bald eagle has a comic smirk and shows that not all bald eagles have to be super serious.

If you are looking for an arm or a striking back tattoo, this can be a great choice. With few minute details on the body of the bald eagle, this tat will definitely make you feel powerful and encouraged!

The bald eagle head tattoo is a highly detailed tattoo design. Though, these bald eagle tattoos can be of varying sizes and details, the best ones are those with intricate detailing on the eyes and feathers. Eagles are known for their intense glare which reflects well in this tattoo – a clear sign of stern determination.

You can experiment a lot with this particular tattoo design. A black ink bald eagle can be great but you can add a splash of colours to elevate the design.

The use of the colours and a little bit of abstraction can also make that eagle tattoo stand out. The bright orange sun in the background can symbolize the rising dawn with the eagle in focus. The bald eagle depicted in this tattoo has an aggressive look on its face, which is quite a contrast to the simple feather work.

A gym freak who loves to show off their guns would love this tattoo on their arms!

Bald eagles in full flight are a treat to the eyes – their majestic wide spread out wings and the intense yet royal eyes can keep your eye sight latched on to this bird – flying high in the sky.

Now, imagine the mighty bird in full flight inked on your torso or your back! You could probably spend the entire day admiring the beautiful piece of art on your body for the rest of your life. The flying bald eagle tattoo with its wings in full flight represents a free rising phoenix – someone who watches over the citizens of America.

It’s not only when eagles fly that they look majestic. Even their landing is done is style. How mystical the bald eagle looks, isn’t it! With its wings spread out, you could see how the eagle is slowly descending and landing or maybe fetching a running mouse. The details on the beak and the claws, and a depiction of wind resistance shows a bald eagle with immense willpower.

Native Americans consider the feather of the eagle to be a symbol of healing. They also think that with the help of an eagle feather you can spiritually connect with nature. The Natives often ink their bodies with an eagle feather tattoo to symbolize bravery and holiness too.

If you are a nature lover and you love the Native American culture, then this can be a great tattoo idea. You can either go for a bunch of wings or a single wing. The best way to make an eagle wing stand out is by using good detailing on the tattoo or good colouring.

You can mix the American flag with the eagle feathers to give a tribute to Native Americans. The beautiful use of different gradients and the depiction of the American stars in the background makes this tattoo quite powerful and striking!

You can even go for a simpler single feather tattoo across your arm for a more sophisticated and subtle approach.

This is a great eagle tattoo to depict the fight between good and evil. In the Bible, Satan tricked Adam and Eve in the form of a serpent. Eagles are a predator of the snake and this tattoo is the one that shows how the eagle could have protected us from the dire fate that brought us out of the Garden of Eden. A snake trapped in the claws of the almighty eagle is a power stance – a natural play on how the toxic people can also be fought if we have the determination to do so. This tattoo should be in your search if you want to go for a confident vision of your art.

If you are of German origin, this tattoo can definitely be a great one to show off your heritage. The eagle here looks ferocious and yet, it is loyal to the flag, clenching on to it. While bold colors may brighten the image, the shades of black or brown on the eagle can really bring on the intimidating factor.

There are many different interpretations and meanings that a tattoo can have. Plus, you can also twist a tattoo by changing some aspects of it. Here, the double-headed bald eagle tattoo is an exercise in creativity. A black double-headed bald eagle separating at the neck and looking on either side can be a creative vision. Of course, to get the full beauty of it, you should place it on the chest or back with maximum surface area for the tattoo artist to play with.

This beautiful white-headed creature has dominated the sky for ages. Bald eagles represent power and courage and with so many bald eagle tattoo designs, you can definitely find one to suit your personality!

Still looking for inspiration, then checkout this blog post about eagle tattoo ideas.