101 Best Bad Bunny Tattoo Ideas That Will Blow Your Mind! 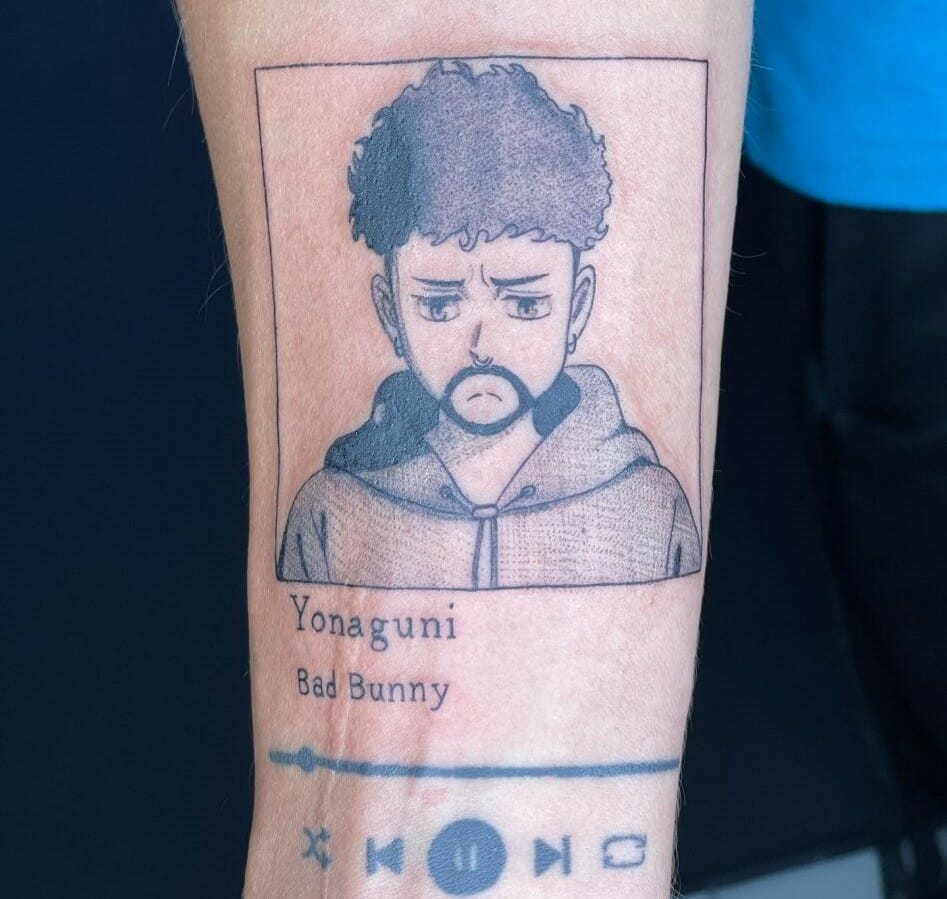 Are you looking for Bad Bunny tattoo ideas? Here is a list of best-curated tattoos featuring Bad Bunny that you will absolutely fall in love with.

Benito Antonio Martínez Ocasio was born in Almirante Sur, Puerto Rico and is popularly known as Bad Bunny. He got a degree in audiovisual communication at the University of Puerto Rico at Arecibo.

Born in 1994, he started singing at the age of 5 and at 14 he started publishing his own songs through SoundCloud. He gained a lot of popularity on SoundCloud. Peurto Rican music producer DJ Luian discovered him on SoundCloud and introduced him to the music industry. Since then, Bad Bunny has given many blockbuster hits independently as well as in collaboration with other renowned artists.

The Puerto Rican rapper, singer and songwriter played a vital role in bringing reggaeton and Latin trap music to a bigger audience. He can rap in Spanish and English and he also has his special version of Spanglish. The Puerto Rican rapper is known to have a slurry low voice and raps in a conversational tone. Formerly along with music, he also had interests in skateboarding and wrestling. He is also known to have an amazing fashion sense and it also gives him a lot of limelight.

Bad Bunny’s girlfriend Gabriela Berlingeri and him have been dating since 2017 and she has helped him in a lot of aspects. The two also have matching tattoos, which is also the only tattoo Bad Bunny possibly has. The tattoo is of a palm tree with a sun behind it, along with lettering. The singer has his tattoo on his thigh while his girlfriend has her tattoo on her right arm. His girlfriend also has two other tattoos, one of the outlines of waves and the other is the word ‘Barbara’.

Though bad Bunny expresses mostly himself through fashion and less with ink on his body, this hasn’t kept his fans from tattooing their favourite artist’s portrait on their skin. Bad Bunny’s tattoos are very popular amongst his fans and admirers. There is even a lot variety of Bad Bunny tattoos, like the anime version, music tattoos, and portrait version, that are on-trend now

This is the tattoo of Bad Bunny with tears in his eyes. He frowns as he stares at his cellphone which then leaves him in tears with his mouth gaping. He is wearing a hoodie and his bread is trimmed in a neat French cut. The tattoo is done in a shade of black and grey. The hair is particularly done in a very interesting way with the outline inked like a cloud and the interior filled with minute dots as shading. There is a Japanese message written on the side with heart shapes added at the top and bottom. This is an anime-inspired Bad Bunny tattoo and is suited for anyone who has a soft corner for him.

This is an elegant Bad Bunny three dimensional tattoo. It is a portrait of Bunny which features him wearing a hood with bunny ears extensions on the top. In this tattoo, Bad Bunny himself has a bunny tattoo inked on his face and he also has a neck tattoo here. The list of accessories includes huge pink shades, a nose ring and a pair of earrings. Little green stars are drawn in the black of his eyes and the hood is tied into a knot at the end. This is a very meticulously inked tattoo with perfection in every tattoo detail. Anyone looking for a High Definition Bad Bunny tattoo should definitely go for this one.

An emotional Bad Bunny tattoo with Bunny’s eye fixed downwards with a gloomy expression on his face. The tattoo is done in an anime style with gradients of dot pattern shading in his hair and his hoodie. The rest of the tattoo adapts to a neat style.

People who are going through or have gone through a bad phase in their life will most certainly be able to relate to this tattoo. So all Bad Bunny fans who are looking for a tattoo depicting an emotional mood, this is the tattoo for them.

A chilling Bad Bunny selfie tattoo will definitely be a choice for a crazy fan who loves Bunny and vacations. This is a selfie of Bad Bunny with heart-shaped goggles, two chain lockets and hair tied into an African styled hairstyle. His collar bones are vividly visible which says he is chilling out shirtless. The tattoo shows a carefree Bad Bunny and holds the meaning of taking a break and enjoying life. If you are in search of a tattoo which shows your deep need of taking some time off your hectic schedule to enjoy the sweetness of life, your search is over here.

The shading pattern suggests him getting a tan on a beach trip. You can get this tattoo done on the calf’s back as in this tattoo or on your arm, chest, back, etc.

An innovative Bad Bunny tattoo design, which is basically a portrait of bad Bunny. Bunny has mysterious thorn-like structures poking out of the back of his head and his eyes are rolled upwards in ecstasy. The portrait Bad Bunny tattoo looks completely lifelike which is a sign of the tattoo artist’s mastery over the skill. This tattoo has a divine feel to it, symbolizing achievement and contentment. If anyone is looking for a unique black and grey portrait tattoo of Bad Bunny, this tattoo is just the right one for you.

The tattoo includes a people loving portrait of Bad Bunny for tattoos, but the tattoo’s style is modified. The tattoo is done in black and brown ink with even shading in the hair and hoodie region. The immediate background has a hue of orange and a message lingers about at the end of the tattoo and letters are inked in a combination of red and black. The size of the tattoo is very standard that will fit in any region of the body. This makes this design very flexible and innovative.

An anime-inspired bad bunny tattoo with the music ‘Yonaguni’ by Bad Bunny playing. This seems like a music player tattoo featuring Bad Bunny. This tattoo is very creative and it can be modified to show your personal favourite song by Bad Bunny the tattoo while the portrait of Bunny remains the same. This tattoo is suited for anyone who is head over heels in love with Bad Bunny songs and wants to pay a tribute to the singer through a tattoo.

A downhearted Bad Bunny tattoo with frowned eyebrows and brown unhappy eyes. The tattoo is outlined in black and the rest is filled with shades of brown and light grey. The entire tattoo is covered in a faint shade of pink along with pink flowers and pink petals. This is absolutely the tattoo a soft-hearted pink-lover Bad Bunny fan is looking for. If you wish, you can custom this tattoo’s shade to other colours as well according to your liking.

The free-spirited nature of Bad Bunny has been portrayed in this tattoo. Here Bad Bunny is consumed in his own thoughts as he pulls his eyes downwards with his little finger on both his cheeks and sticks his tongue out in the process. He has funky goggles on with tapered sides and a zig-zag hairstyle. There is a third eye drawn on his forehead and a cross-shaped locket on a chain around his neck. The tattoo seems like he is making a funny face towards someone. Different shades of black have been used to ink this sculptural tattoo, which will be a perfect tattoo for anyone who claims themselves to be the town’s bad boys.

A cool and dashing looking Bad Bunny, with dark sunglasses and hair partitioned into two high buns is one of a kind Bad Bunny tattoo idea. The rough beard and the repulsive expression on his face give this tattoo a nasty look. Two emojis are added to the bottom of the portrait as well as a grey rectangular background. The entire tattoo is done in black except for the heart-shaped emoji which is done in red. This tattoo is particularly suited for young adults or people of any age who feel their teenage never ended.

What is the meaning of a bad bunny tattoo?

A bad bunny tattoo can have a number of different meanings, depending on how it is designed and what symbols are included. Generally, these tattoos represent rebellion, mischievousness, and a general disregard for authority or conventional rules. They can also be seen as a way to show off one’s wild side, or as a symbol of strength and power. In some cases, bad bunny tattoos may also be seen as a way to show support for the black market or illegal activities. Whatever the meaning, these tattoos are sure to turn heads and get people talking.

What is the best placement for a bad bunny tattoo?

There is no one “best” placement for a bad bunny tattoo – it all depends on your personal preferences and the overall design of the tattoo. That said, some popular places to put these tattoos include the upper arm, chest, back, or shoulder. Where you ultimately choose to put your tattoo is up to you, but it’s important to keep in mind that it will be visible to others, so you’ll want to choose a spot that can easily be covered if necessary.

How much does a bad bunny tattoo cost?

The cost of a bad bunny tattoo will vary depending on the size, complexity, and location of the tattoo. Generally speaking, smaller tattoos will cost less than larger ones, and tattoos that are more complex or detailed will also be pricier. The best way to get an accurate estimate for your tattoo is to consult with a few different artists and ask for quotes.

How big is a bad bunny tattoo?

Bad bunny tattoos can be as small or large as you like – again, it all comes down to personal preference. That said, most people opt for smaller designs that can be easily covered if necessary. If you’re looking for a more dramatic tattoo, however, you may want to consider a larger design.

How long does a bad bunny tattoo take to heal?

Like all tattoos, bad bunny tattoos will take some time to heal. The healing process can vary depending on the size and location of the tattoo, but most people can expect their tattoo to be fully healed within 4-6 weeks. During this time, it’s important to follow your artist’s aftercare instructions carefully to ensure proper healing and minimize the risk of infection.