10 Best Back Of Bicep Tattoo Ideas That Will Blow Your Mind! 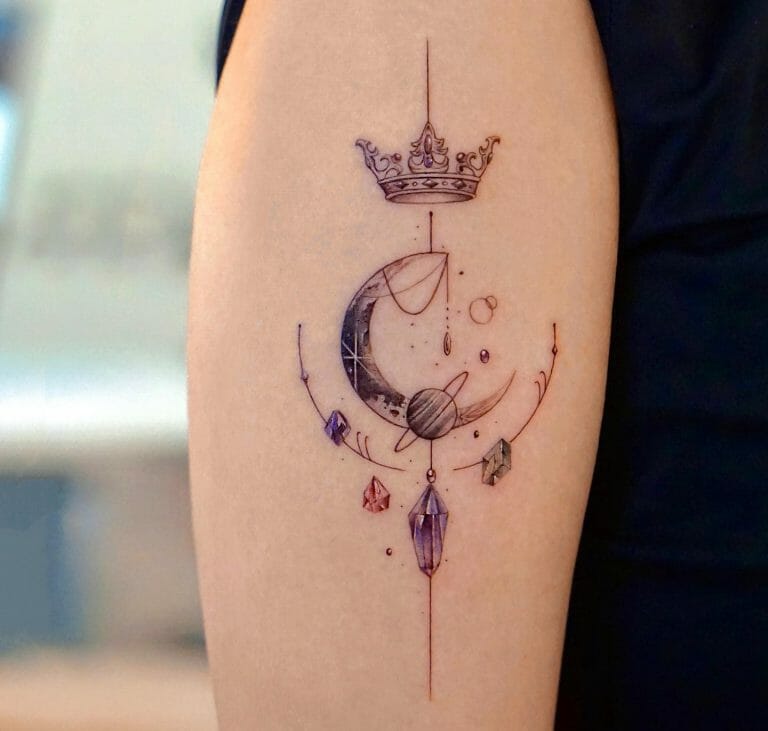 If you are bored with getting tattoos on cliched places like the wrist, shoulder, or ankle, then the back of bicep tattoo is the new one you should try.

Arm tattoo designs have always been in high demand from half sleeve to full sleeve in the tattoo industry.

Whenever we talk about arms the best places to get inked with are the forearm, wrist, biceps, and the sleeves. Even biceps are the first place for most guys to get their first tattoo.

But often people ignore the back of the arm, particularly the back of the bicep which is a great place to get inked with. As this place does not come in contact much with clothes the longevity of the tattoo is often long. Small to medium sizes tattoos can be easily done in this space as there is enough room for them.

Geometric Patterns Back Of Bicep Tattoo

From doing simple design structures to making mandalas the geometric tattoo is one of the most versatile tattoos. These tattoos blossom extremely well as back arm tattoos and can be done on the upper arm or in the form of continuation from the upper to lower arm. Mostly black ink is used for these tattoo designs and is both popular among men and women.

From carrying universal to personal meanings the geometric tattoos demonstrate harmony, order, and stability. Now each shape has its own story to tell where the circle represents the endless cycle of life, the triangle demonstrates strength and creativity, and also Holy Trinity, the square represents truthfulness. They can be either done as basic shapes or can be made intricate by overlapping designs.

Tribal Back Of Arm Tattoo

The tribal tattoos on the back of the arm start from the shoulder region and end mostly in the wrist covering the portion from the upper arm to the lower arm. The choice of color for these sleeve tattoos is mostly black and is popular among both sexes.

These tattoo designs are a way to pay homage to the indigenous roots of the tattooer. These back-of-the-arm tattoos celebrate the cultural and social heritage of the tribe and their achievements.

Skull Back Of Bicep Tattoo

One of the fiercest and most elaborate tattoo ideas is the back of the arm skull tattoo. The skull tattoo ideas represent both good and bad, life and death, positive and negative, and have varied meanings in different cultures. Mostly done in black the great location for these designs are as sleeve tattoos, forearm tattoos, back tattoos, or inner arm tattoos.

Only an efficient tattoo artist can create these cool ink ideas for skulls as the back of the bicep tattoos. Now they can either be done as simple skull tattoos or fused with other images to obtain different meanings. A skull with a rose will represent ugliness and beauty, a skull with a dagger will demonstrate someone associated with crime, a raven and skull will represent death, and many more such ideas. A Skeleton hand tattoo on the back of the bicep is also becoming very popular with the skull tattoo.

Quote Back Of Bicep Tattoo

If you decide to express art and tell a story in a unique style the quote tattoos are the right choice for you. These tattoos cover a very small space yet the effect is maximum. The shoulder, bicep, inner arm, upper arm, wrist, and many portions of the body are suitable for this design. Recently among guys and girls, they are also being etched as the back of bicep tattoos.

From a famous quote to quotes on inspiration and love everything can be done with this fun tattoo style. They can also cover different lines from books, movies, and songs, and is a great way of saying out loud without speaking.

Butterfly Back Of The Bicep Tattoo

Butterfly back of the arm tattoo designs are one of the most delicate tattoo styles which have stood the test of time. In different cultures, this beautiful insect represents different things in Chinese it is associated with immortality and grace, in Japan with marriage, in Mexico with souls of the departed, and many more. Popular as chest, upper arm, shoulder, or inner arm tattoos they are now being done by many in the back of the bicep area.

The color can vary from simple black to vibrant colors and size is mostly small to medium. The representation of femininity, freedom, and confidence has become the obvious symbol of these tattoos but they are also tattooed by men. The butterfly undergoes metamorphosis which has become a metaphor for the life of any person who has developed personally and for this meaning it has become one of the most popular ideas for tattoos.

Back Of Bicep Armband Tattoo

Done in the form of curved lines in a circular pattern the armband tattoos cover the whole portion of the arm from the upper arm to the lower arm. Also known as armlets or bracelets these tattoo ideas are extremely aesthetic in nature. Ranging from solid black lines to ornated bands many tattoo designs can be chosen from while doing this.

Each tattoo ideas represent different meanings and they can be either done with simple circular lines or as a huge sleeve tattoo. Both popular among guys and girls the solid bands express the loss of a loved one, while the tribal armband design signifies a connection with family roots. Known for their versatility in a muscular body they would blossom extremely well as a tattoo on the back of the bicep or as a forearm tattoo.

Snake Back Of The Bicep Tattoo

These tattoos are done in such a manner it seems that the snake would slither from the shoulder to the wrist through the inner arm and the bicep. Mostly done in black they are quite popular among men and women.

Known for their deadly nature the serpent tattoos’ meaning can be twofold. On one hand, the creature is known for its deadly poison and on the other, it has become a timeless symbol of fertility, power, and rebirth. Sometimes it can be inked coiling around any object to show the trait of desire with this tattoo design.

Flowers Back Of Arm Tattoo

A single flower or a bunch of them, flowers back of arm tattoos are a work of beauty. From an endless pool of species, you can choose any of them and get inked with the flower design. The choice of ink can be black or the color of that particular flower which you want to get inked with. The choice of placements for this popular design is mostly the inner arm, upper arm, lower arm, and also as a forearm tattoo.

But recently they have become popular as the back of bicep tattoos where different flowers have different meanings. Rose is the symbol of love and with thorns it represents pain, sunflower demonstrates happiness and good luck, and lavender is associated with calm, and grace. Women choose these tattoos mostly and depending on the personality of the tattooer the flowers must be obtained.

Wild Animals Back Of The Bicep Tattoo

In many ancient cultures, it was believed that the human and the animal souls were connected, and tattooing them was holy. They are both popular among guys and girls and the choice of ink totally depends on the type of design. Extremely popular as a half sleeve or a full sleeve tattoo, they are now also being done as a back of arm tattoo.

Now each tattoo designs portray different tattoo ideas and images. The lion is the symbol of power, leadership, and pride, the tiger signifies a balance of innocence and power, and the wolf demonstrates loyalty and spiritual protection. Whichever trait suits the person they must be tattooed in that manner.

Minimalist Back Of The Bicep Tattoo

With the concept of less is more minimalist tattoos have gained extreme popularity after World War II. The back of the bicep is an ideal place to get this tattoo done and is mostly inked with black.

Those who want to express themselves subtly can get these tattoos done and even can hide them in workplaces by their clothes. Designs ranging from butterflies, fire, lightning bolts, and many more can be done using this method.

If we see in the tattoo pain chart the back of the biceps tattoo is a bit less painful than the ones that are done on the neck, fingers, or face. It is hopeful that these tattoos’ pain can be handled even by beginners.

Other tattoo designs which can be tried on the back of the bicep are: