10 Best Aztec Tattoo Ideas You’ll Have To See To Believe! 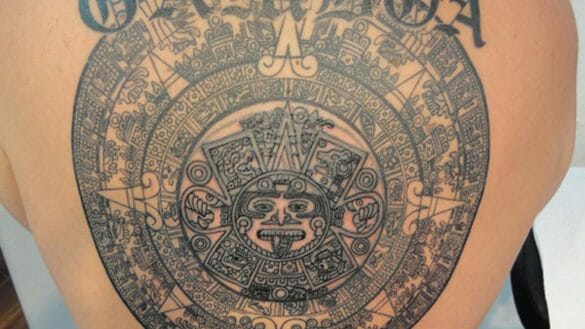 Are you looking for a tattoo that will celebrate an ancient Mesoamerican culture? Here are some gorgeous Aztec tattoos that are also historically accurate.

Many Mexican people get Aztec tattoos in order to feel a deeper connection to their lineage and ancestry.

The Aztec empire was established in the 15th century centering around Mexico. The three powerful states of that time Mexico-Tenochtitlan, Tetzcoco, and Tlacopan, came together to form an alliance that resulted in the Aztec empire.

The Aztecs had a unique way of life and culture that most people in the world do not know much about. Most of their history has been destroyed by years of colonial conquest but the indigenous people of the region have dutifully preserved the history of the empire including the sacred symbols and images of the period. Hence, Aztec tattoos are quite popular among people from the Central American region or those who originate from it.

Some of the best Aztec tattoos which are inspired from the history of the Aztecs include the Aztec warrior tattoo, Aztec eagle tattoo and the Aztec sun tattoo. According to historical studies, some of the Aztecs also had tattoos done on their body.

One of the most popular Aztec tattoos is the Aztec warrior tattoo. The Aztec men were extremely fierce warriors who were known for their indomitable fighting spirit, honour and bravery. The men had to risk their lives. People who want to get tattoos of ancient warriors from the Mesoamerican time period can look at these tattoo designs.

A tattoo of an Aztec warrior can represent your own strength and courage as you face all the challenges in life. Many people who fight with honour and valour wish to get warrior tattoos in order to draw inspiration from the brave warriors from the past. A bold and realistic Aztec warrior tattoo design will definitely stand out in a crowd.

The drawing of the Aztec Sun God is one of the most common Aztec symbols. Many people wonder “What does the Aztec sun tattoo mean?” and according to their culture, the Aztec Sun God is known as Huitzilopochtli and he was also the God of War. The men and women of the region worshipped Huitzilopochtli before a war. Many of the warriors also had inscriptions of the Sun God on their shields and other weapons which they took to war. The people they would defeat from other regions would be brought back to the city to be sacrificed to the God. This way, the Aztec rulers ensured that the Gods would be kind to them and help them prosper.

If you are looking at Aztec tattoos, the Aztec sun tattoo is one of the most popular designs. However, you might have to spend a long time with your tattoo artist to capture the intricacies of the symbol in your Aztec tattoo perfectly.

Human skulls were an important part of the Aztec culture. Many of the rulers proudly displayed their collection of skulls as it was a show of power. The skulls served as a warning to those who dared to defy the local customs and traditions. The skull also represents the practice of human sacrifice that the Aztecs conducted once or twice a year in order to appease the gods.

The Aztec calendar is a shining example of how the Aztec culture was very developed and way ahead of its time. The calendar had two simultaneous cycles-the ritual cycle and the civil cycle. The ritual cycle listed the exact days when each deity was to be worshipped while the civil cycle consisted of the usual time cycle that the people went through.

The Aztec calendar was quite intricate and represents the depth of knowledge of the people. If you are fascinated by the scientific progress of the Aztecs, you could also choose to get the Aztec calendar tattoo.

Ideas For Aztec Tattoos That Are Easy To Place Anywhere

The placement of the Aztec tattoos can often pose a challenge because of their size and complex design. While most people prefer to get their Aztec tattoos on their arm or bicep area, these tattoos can be easily placed anywhere. Some of the Aztec tattoo designs are elaborate enough to cover your entire back, shoulder or chest. The tribal designs can also cover up the sleeve of your arm along with your chest. The design of the tattoo has to be decided by you in order to pick the perfect placement for the tattoo on your body.

Quetzalcoatl is the Aztec god of wind who also provided food to the people in the form of maize. This significant god of the Aztec culture was represented as a feathered serpent. The Aztecs conducted human sacrifices to please the serpent god during times of drought. They would pray to the serpent god Quetzalcoatl and offer them a life in exchange for a bountiful harvest. The sacrificed people also believed that it was their honour to be chosen for such an impactful event.

The feathered serpent tattoos are quite popular along with the Aztec eagle tattoo. You can also ask your tattoo artist to use coloured ink in order to make your tattoo look even more stunning. If you are still unsure about getting a Quetzalcoatl tattoo, check out some more awesome Quetzalcoatl tattoo designs!

The Central American region boasts of a wide variety animals and birds that is not found anywhere else in the world. One of the most well-known animals of the region is the Jaguar. These carnivorous predators hold enough power to sink their teeth into the skulls of their prey. If you want to portray the Aztec way of life through your tattoo, you can also get the tattoo of a jaguar.

As seen in the picture, you can also add other Aztec elements to the tattoo to make it more historically accurate and realistic. After all, your tattoo is a product of your creative expression and emotion so you can modify your Aztec jaguar tattoo however you choose to.

The Aztec architecture is a type of late Mesoamerican architecture with many of the temples still standing in the cities of Malinalco, Tenayuca and Tenochtitlan. While the common people lived in huts made of mud and straw on the outskirts of the city, the people constructed major buildings for their rulers and other influential people to live in. They also built similar structures which were temples to worship gods and goddesses in.

Many people choose to get realistic designs of these architectural structures on their body to remember where they come from. A lot of Aztec tattoos also have the symbol of the temple as a mark of respect and religiosity.

The Aztecs were an extremely lively and colourful civilization. They often depicted their gods with bright colours. They also considered the Quetzal bird to be sacred and worshipped the bird as well. During many of their rituals and customs, the Aztecs priests wore elaborate headdresses with colourful Quetzal feathers as a special ornament. Even the rulers wore these ornaments during official duty.

Consequently, if you are tired of the monochromatic Aztec tattoo, you can easily add coloured ink to make it look more lively and vivid. Here are some amazing ideas for Yellow Rose tattoos which will enhance the beauty of your tattoo.

If you are tired of the usual Aztec tattoos then you can also add contemporary or modern tattoo elements according to your own choices. While many of the Aztec gods and goddesses were not depicted as having human faces, modern artists have taken the liberty to imagine the goddesses as such. You can draw some inspiration from these amazing works of art which celebrates the goddesses in the Aztec civilization.

If you have enough knowledge about Aztec religion and art, you can combine the symbol of the goddess with other images from that time and create a fusion Aztec goddess tattoo. These modern elements enrich the Aztec tattoo and also make it more distinct and unique.

The tribal Aztec way of life was extremely unique and fascinating. Till date, archaeologists and historians try to figure out the real history of the empire along with deciphering the ancient symbols. The fact that many of the ancient tribal men and women got tattoos on their body shows how tattooing or tattoo drawing is an ancient art.

If you want to celebrate the Aztec art and customs, you can definitely try out the realistic Aztec tattoo designs. Whether you choose tattoos of warriors or the symbol of a god, your tattoo will speak volumes about your heritage and place of origin.