10 Best Avengers Tattoo Ideas You’ll Have To See To Believe! 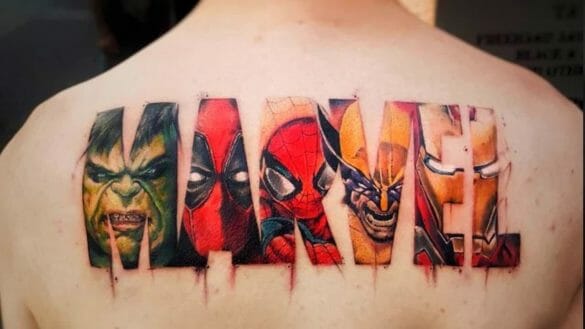 Avengers assemble! because you are about to find out some of the amazing Avengers tattoos which will urge you to get yourself inked.

Marvel Cinematic Universe (MCU) crashed the box office with the release of Avengers bringing all the major superheroes together in one frame just like the Avengers comics which made the fans go gaga over the movie.

We all love superheroes and superhero tattoos are the craze of all times. Fans cannot be bounded and to prove their loyalty they would go to any extent even if it includes getting a detailed piece inked to their body.

It is not only the fans but also the actors who played the five of the original Avengers including Chris Evans, Robert Downey Jr., Jeremy Renner, Scarlett Johansson, Chris Hemsworth who decided to get matching tattoos to commemorate because tattoos have great significance. It was initially Scarlett Johansson’s idea to get matching tattoos everyone gladly agreed while Robert Downey Jr. and Jeremy Renner bullied Chris Hemsworth into doing it. It was done by Josh Lord the famous tattoo artist who flew to Los Angeles as reported by Entertainment weekly.

Fun fact: Only Mark Ruffalo of the original six avengers didn’t get a tattoo and opted out because he is scared of needles.

Avengers are the mightiest heroes of Earth, and getting inked is a huge commitment towards the characters. Hence, it is very important to comprehend which tattoo or tattoos are going to suit you and your personality. Also, it is very important to get it done by a proficient tattoo artist. Nevertheless, your search is over because we have created a list that has a variety of Avengers symbols and layouts to choose from even though the total number of original Avengers is six yet we have curated other avengers as well.

Tattoos can be of various kinds they can be traditional, tribal, realistic, watercolour, geometric, outlined and the list goes on. It depends on the person who is getting inked and the style that is desirable to that person. A simple minimal geometric pattern tattoo is perfect just like this minimal Avengers logo tattoo which is nothing over the top but just an Avengers symbol. There are original six Avengers, a minimal tattoo like this one represent the six Avengers with the number ‘6’, the line that makes an ‘A’ stands for the Avengers collectively. It can also be an Arc Reactor for Iron man (Robert Downey Jr.), Star for Captain America (Chris Evans), Widow’s mark (Scarlett Johanson), the arrow of Hawkeye (Jeremy Renner), lightning of Thor (Chris Hemsworth), and Toxic logo for Hulk ( Mark Ruffalo) which is a great way to integrate the entire idea into one simple tattoo. The five of the original Avengers which include the Avengers cast (other than Mark Ruffalo) opted for matching tattoos which were done by the tattoo artist Josh Lord as reported by Entertainment Weekly.

We all have our favourite Avenger. No matter how much we love the entire cast be it the six major avengers or the entire ‘Avengers: Infinity War’ cast, we may want to give a special tribute to that particular superhero whom we love the most. One can opt for a tattoo like this where the most significant line of Iron Man from the Infinity War played by Robert Downey Jr., is inked right under the logo.

Tony Stark (played by Robert Downey Jr.) is the result of his own creation and has the maximum number of appearances throughout the MCU movies. The suit may symbolize power, but he is more than just his suit. He happens to be a sauve, badass, brilliant scientist and engineer. However, opting for a realistic tattoo like this of the armor can be a tribute to the sacrifice he made as a superhero particularly in ‘Avengers Endgame’.

The Asgardian God Thor is the symbol of thunder, courage, and strength. If you have that thunderous rage and determination within you, check out this Avenger tattoo of Chris Hemsworth when Thor reaches his max level of power.

The Mjolnir is always for the worthy. It can be a very unique tattoo as it holds great significance because it is a divine and magical hammer. Instead of going for the image of Thor, think about getting a tattoo of the Mjolnir like this one which may represent not only Thor but also power and strength.

The perfect illustration of never giving up is Captain America. From someone who was incapable of doing anything and bullied to someone capable of doing things beyond limitations – Captain America is a true-blue American Hero. Played by Chris Evans, he brings out inner hope and aspirations and having an aesthetic colour splash tattoo would look so cool on the arm.

One can get creative with the Avengers tattoos like this one which has the bow and arrow of Hawkeye played by Jeremy Renner in the movie. This tattoo has a wonderful burst of blue and purple colour with a simple yet aesthetic version of the bow and arrow as featured in the film and comic. It embodies sharpness, agility, and resilience.

Hulk played by Mark Ruffalo is all about the transition from a very cool and calm person into a massive rage-filled superhero. A tattoo can show the Hulk transition very clearly and the vibrant green colour would certainly catch a lot of attention.

The significance of Black Panther is huge as it cannot be confined to just the character. Getting a tattoo like this one that has a combination of black layered with white detailing can stand out as it may represent the secret of life and death, grace, power, beauty and other things.

The long-awaited Captain Marvel from the comic finally made an appearance in the last ‘Avengers: Endgame’ film. She embodies strength, courage, and the ultimate concentration of power ready to face anything. The star is her signature just like this water-colour tattoo. Watercolour tattoos have gained a lot of recognition lately because of their detailed appeal.

“With great power comes great responsibility” is the motto the defines Spiderman and his conflict with himself. Getting a graphic Spidey tattoo like this one covering an entire arm requires a lot of commitment. But if you love and relate to the ‘friendly neighbour’, then this tattoo can be a great way to show your love.

Avengers tattoos in any form will always be in trend. But before investing in any tattoo make sure to keep few things in mind that getting a tattoo is a huge commitment and not an entertainment source. Always get it done from a very skilled tattoo artist. The Avengers tattoo meaning may vary according to the character or the layout so be very specific about it. You can also opt for the Avenger comic tattoos to show that you have read the comics as well and are an ultimate fan of Marvel.