10 Best Astronaut Tattoo Ideas You’ll Have To See To Believe! 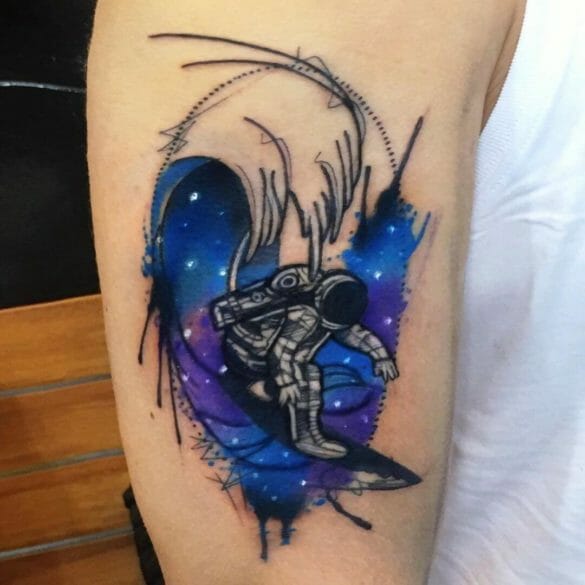 Looking to place the wonders of space on your skin? Here are the best astronaut tattoos that can let your imaginations run wild and get you inked with amazing astronaut designs!

Space travel has been a topic of interest for a long period of time and becoming an astronaut is something that many dreams of!

Incredible leaps and bounds in technology and engineering have helped space exploration possible but the courage of men made traveling into space an exciting expedition. Astronauts have become an integral part of discoveries of the universe beyond!

Astronaut tattoos are the perfect way to honor these brave people as they travel through space – for science and human advancements! Astronaut tattoo designs are limitless as there can be as many elements to the designs that you can add yourself! The designs can be from anywhere between sci-fi to real-life details or events to pay homage to some of the greatest achievements of the human race! A whole new world of possibilities lies at your feet with these amazing designs and ideas that will charm you with their details and abstract designs!

This amazing astronaut skull tattoo is one of the best tattoo designs that you can get on the market! The detailing in the tattoo is gorgeous to look at with its amazing black shade that makes the tattoo look sinister to the core! You can tell that tattoos like these are tough to make due to the amazing details that have gone into the skull. The sketch of the spacesuit is amazing as the artist has made it look like small skulls make up the suit! The small bones on the body of the dead spaceman give this tattoo a ‘sinful’ look! If you have many skeletons in the closet, then designs like this astronaut art are perfect for you!

Astronaut Tattoo Idea For The Sci-Fi Maniac In You

“In space, no one can hear you scream”, the popular dialogue from the 1979 movie Alien comes to mind when we see this amazing astronaut tattoo. This tattoo is one of the many great spaceman tattoo ideas, layered with many amazing intricate designs. The amount of work put into this tattoo can be seen when we look into the many elements of space travel in this. The astronaut is the focus of this space tattoo as it takes up a large part of the design. The astronaut is portrayed in such a way that it seems like he is seeking out help as he goes through the different aspects of space travel and is overwhelmed by everything that is going around him. If you are someone that often feels overwhelmed and different in your surrounding, then this is one of the best astronaut tattoo designs that you can get inked on your body. The planets, stars and the rocket adds a surreal amount of details, with the alien figure adding a sci-fi element to this simple astronaut tattoo.

This is a well-done tattoo and hopefully, your tattoo artist can do their best to replicate this as best as they can. However, do remember, that just because this tattoo is all black, doesn’t mean that you can’t make it colourful. One of the best parts of getting inked is that you control the designs and colours so you can easily make this astronaut tattoo as colourful as you want!

This cute and minimalistic astronaut dog tattoo pays the perfect homage to Laika the space dog! In November 1957, Laika became the first animal to orbit the earth as she was launched into space. Unfortunately, Laika couldn’t make it back alive. Since then, so as to always remember her, Laika has been engraved into the history of interstellar travel. The Soviet Union memorialized her at Star City, Russia in the form of a statue.

This tattoo is one of the many cute tattoo designs that you can get inked on your body if you want to pay tribute to Laika. The cute design with just a black outline is easy on the eyes and tiny details like the bubble drawn around the head give off the look of a helmet. The stars and the planets around add a little more details to this tattoo. There is no limit to tattoo designs like these as you can either fill it all black or ask your tattoo artist to fill it with watercolour. Thanks to the clean look, you can get this cute astronaut tattoo inked on any part of your body!

This charming and colourful astronaut tattoo is another one of the best space tattoos that you can get inked on your body. The idea behind the colour is to make the tattoo more appealing for people who like to live colourful lives. Like most other astronaut tattoo designs, this too focuses mainly on the portrait of the astronaut as they float through space reaching out for the planet in front of them. The planet behind them along with the black hole gives a wider depth to the idea of an open yet hard-to-reach universe. It is so much grander and beyond our imagination.

If you wish to get a small astronaut tattoo, then this isn’t the one for you as this spaceman tattoo will always look the best in a large size. Tattoo ideas like this astronaut tattoo are usually the best when they are coloured and will look well on the chest or the back. Explore your own universe with this one of the best astronaut tattoo designs and flaunt it as much as you can.

Tattoo ideas like this one here can be the best bet for people who want a tattoo but want to keep it on the down-low! This astronaut tattoo is neat to look at thanks to its simplistic look. This astronaut tattoo perfectly pays homage to Neil Armstrong, the first man to set foot on the surface of the moon in the year 1969. The American flag adds a good amount of national pride in men and women that is felt by the achievement!

Astronaut tattoo ideas are extremely popular and easily distinguishable due to the achievement they portray! Thanks to there being no limit to what tattoos can achieve, you can make yours unique by adding details like planets and stars. You might want your tattoo artist to watercolour yours to make it pop out! The small tattoo can also fit behind the neck if you want.

This tattoo is one of the best, if not the best, with its surreal design and ideas. This colourful piece of artwork is one of very few astronaut tattoo ideas that is the best in its coloured form. Tattoo ideas like these are eye-candy thanks to their intricate designs and attention to detail.

This cheeky little tattoo is the perfect design for the geek inside you! This cute tattoo sums up the phrase “Space Cowboy” perfectly. This is one of the many tattoo ideas that work well in the colourful form instead of just being an outline. The astronaut is made to resemble a cowboy as he holds his cowboy lasso and is getting ready for some space action! The reflection of the stars in the helmet is sketched in to resemble the eyes of the astronaut. The reflective colorful universe adds an imaginative aura to the tattoo!

This is one of the several number of astronaut tattoo ideas that pay tribute to either the Clint Eastwood movie ‘Space Cowboys’ or the popular “See you later, Space Cowboy” dialogue from the popular anime series ‘Cowboy Bebop’!

This bewildering piece of tattoo art is one of the very best designs as it pays the perfect tribute to Michelangelo’s critically acclaimed artwork the Sistine Chapel. The detailed sketch of the astronaut and the greatly detailed spacesuit add a great deal of realism to this tattoo. There is no limit to the interpretation of this tattoo as it is up to you to interpret the hand that reaches out to the astronaut amid the Milky Way universe in the background can either be the hand of God, man, or alien life!

Tattoo designs like these are best when they are left to interpretation as the vagueness adds more to the imagination!

This amazing astronaut tattoo sleeve idea has to be one of the best-looking tattoos on the list due to the splash of colours introduced to this tattoo. Tattoo designs of such magnitude may be hard and time-consuming to place on your skin but are absolutely gorgeous thanks to the amount of detailing and effort that goes into them. The photo-realistic element of the tattoo is staggering to look at with the astronaut at the centre of the tattoo, as they are engraved into the colourful universe around them! The planet, stars, and space in which the astronaut figure is engraved is the perfect mix and match of bright colours and stellar artistic designs.

Due to the large size of the tattoo, it is best suited for the arm sleeve, back, chest, or either of the legs.

Abstract Astronaut Tattoo Design For The Thrill-Seeker In You

This stellar tattoo idea is an absolute treat for those who seek thrill and like to live an adventurous life! The astronaut in the tattoo is seen to be surfing on a space wave. The bright blue colours of the wave and the subtle detailing on the astronaut are complementary to each other as they fit each other like a glove. The pitch darkness in the helmet can be interpreted as going into something blind and then figuring out how to travel through life as it goes.

This is one of the best abstract tattoo designs that men and women can get inked with!

Here are some more suggestions to help you get the right astronaut tattoo: