10 Best Astro Boy Tattoo Ideas That Will Blow Your Mind! 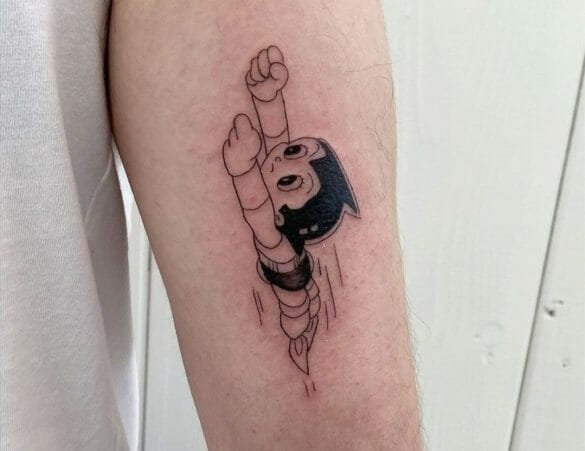 If you find a certain robo-boy cute and cherubic, then these Astro Boy tattoos are sure to tickle your fancy while discovering cute little tattoos with us!

Ever since, a child-robot with mega-power, captivated the imagination of a country in need of hope and aspirations as Japan was recuperating from the devastation of war.

While Astro Boy was bestowed with superpowers that included flying and laser-fingers, he also had a conscience and was more human than a robot. We have watched him struggle and grow and capture millions of hearts, inspiring youngsters in Japan and around the globe.

This little boy had a significant influence on a country looking for its future. And, throughout the world, this child-robot with a soul continues to inspire new generations of robot designers.

Of course, we have curated a list of cute Astro Boy tattoo designs that you can fawn over and take your pick from because paying homage to your favourite cartoon and inspiration is always a good idea.

We shall start our collection with this cute and simple design that highlights Astro Boy in his human form and the Robot beneath his human skin.

While the tattoo might not hold a deeper meaning, it is surely a pretty little design with a little heart in the midst.

We are all aware of the fact that robots do not function with hearts, however, our cherubic little robot kid is special and while he was built and not birthed, he had human emotions. The small black heart in the midst of his human and robot self signifies just that.

The tattoo artist creates this iconic character from the Japanese series with simple Fineline work and single colour, black. It is ideal for placing on the forearm and or legs.

While we all know the Japanese series was about this sweet robot, struggling between humans and robots, this tattoo design is created with an angry twist to it.

We are also aware of what Astro Boy wears but, here the tattoo artist created a clothed twist that quirks up the design.

It doesn′t end here though, Astro Boy is holding a cigarette and looks rather annoyed. If you want a mature, older version of Astro Boy, a suited-booted version of the little hero, then you will surely appreciate this cute design.

This small tattoo is perfect if you are getting your first Astro Boy tattoo. The small, cute size of the tattoo makes it all the more perfect. People who prefer small tattoos will definitely appreciate this little work of art.

The tattoo artist created a flying Astro Boy, a determined look on his face, flying to wherever his superpowers are needed.

It is ideal for the forearm or even the wrist.

This tattoo resembles the character to the T, complete with the character’s signature face The colourful and glossy look given to the tattoo makes it bright and fun.

For those looking to tattoo an exact replication of the tattoo, with any customized twist, this tattoo will surely suit your taste.

It is also ideal to place on the forearm or on one′s leg. However, it is a tad larger in size considering most of the Astro Boy tattoos are small and more appealing that way.

Done with blackwork style, this small tattoo holds the character’s signature face from the anime series Astro Boy, when he is taking flight. The artist created a simple drawing of the iconic character complete with fire shooting out of his legs.

He looks determined to save the day and the boy inside his robot personality never fails to win youngsters′ admiration.

It is perfect to get tattooed if you are making room for a new tattoo on your forearm or even for your first tattoo.

While this tattoo resembles Astro Boy, at least the character’s physical form, it does not completely replicate the character from the anime series. However, the artist creates a beautiful black and white version of the character and his silhouette.

The surrounding twirls of smoke and the shading done in some parts of the tattoo gives the tattoo a splattered paint look, adding to its gorgeous appeal.

It is huge and perfect for the upper thigh, seeing as the thigh provides a wider space for the artist to get creative as such.

If you are looking to get a new tattoo to add to your collection, then look no further because this small tattoo will definitely sail your boat to the tattoo studio, where you can get it tattooed on your back.

The tattoo might not seem like something that holds a deeper meaning, but we all know and love Astro Boy and the boy inside speaks to the child in us. This tattoo is perfect to mark those childhood days for you to cherish for a long, long time.

The artist gave the tattoo a grainy, faded look which oddly but surely adds to the appeal making it a sought-after design to have. Especially for someone who is looking to get their first Astro Boy tattoo.

This is a unique look at another Astro Boy tattoo design. So far we′ve been acquainted with the robot skeleton of Astro Boy in most of the tattoo designs, however, this tattoo holds a humanized version of the character’s physical form.

The artist makes a small skeleton of a flying Astro Boy in blackwork style and the details captured gives it a “realism drawing” look. Realism drawing is highly popular in the tattoo community and many enjoy its realistic look.

If you are one of them, then we are sure you will be making room for this little design in your tattoo collection.

In this bright design, we see an angry Astro and the main focus is put on his mechanical firing arm which seems to be one of the many superpowers or weapons he was built with.

It is simple and highlights a more robotic part of him rather than the cherubic robot boy are used to seeing. People who appreciate a little action are sure to appreciate this action-filled art.

Fineline Tattoos are always a hit for people who like minimalist designs. You will find just that here with this Fineline work done by the artist. The signature pose of the anime series Astro Boy holds the attention in the design and every line is meticulously drawn making it look crisp, neat and minimal.

Astro Boy Tattoos are Chris Brown approved. Celebrities like Pewdiepie and Ruby Rose are also known to have the cherubic robot boy′s tattoo. Not only is it a cute choice but it also reminds us of our childhood superheroes and tattoos marks our love for our favourite characters. This small collection of tattoo designs are sure to hold your attention while you take your pick.