101 Best Arrow Tattoos For Men That Will Blow Your Mind! 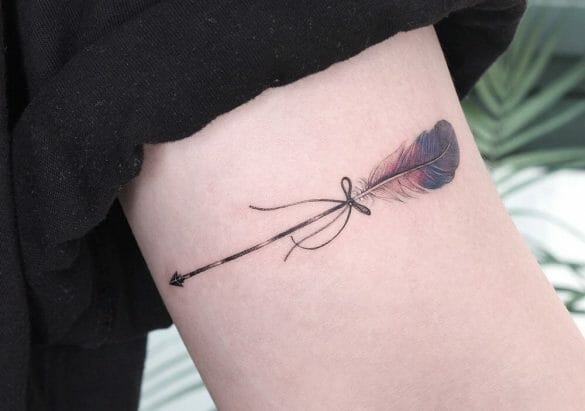 Arrow tattoos represent the concepts of struggle and victory. Let’s look at some breath-taking arrow tattoos for men!

Arrow tattoos are a popular design choice for good reason: they are extremely customizable.

And the customization extends beyond the physical elements of your layout. Arrow tattoo designs have a lot of meaning inherent in them. Tattoos were originally used to permanently memorialize personal aspects of one’s life with great insight, and the arrow has now become a famous design choice. An arrow tattoo, which can represent anything from friendship to war, will make a strong and impactful statement—whether it has personal meaning for you or not.

The arrow is associated with many cultures. The pointer art could have originated in a variety of locations. Many tattoo artists believe that the arrow originated in the Native American culture of Indigenous people because it was such an important tool in their lives. The most prevalent connection with the arrow is as a hunting and protection tool.

A compass arrow tattoo symbolizes moving forward in a new direction or beginning a new chapter in one’s life. Another popular design is a diamond arrow, which represents having the courage to move forward due to the gem’s reputation as one of the stiffest materials on the planet. This black arrow tattoo design is made into a beautiful arm tattoo body art.

This tattoo is a forearm arrow tattoo and can be called a geometric arrow tattoo and is beautifully made by the tattoo artist. The arrow tattoo symbolizes direction to move ahead in life and the compass shows the right path that has to be followed to reach their goal or destination. The image also has symbolic meanings written in words in the tattoo design.

The Broken Arrow Tattoos For Men

In addition to being a weapon of war, this arrow tattoo symbolizes peace. A broken arrow symbolizes burying the hatchet or putting aside a quarrel for the greater good—whether that is the self or an external element. A single arrow can also represent protection from harm or peace, albeit in a more individual, personal sense.

Whatever be your reason for getting an arrow tattoo, it will be filled with meaning—both personal and historical. The other way of interpreting this broken arrow tattoo design is that the person is tired. They want a break. They are tired of running and doing everything and want to rest. This body art is most probably a part of a patchwork tattoo and is a perfect creative tattoo.

Lion And Arrow Tattoo For Men

So, if we try to mix both the tattoo design and come to a conclusion it gives positive vibes of going ahead in life but with strength and courage. The entire tattoo design is quite eye-catching and the use of black ink also makes the tattoo design very attractive. If anyone is thinking about an arrow tattoo and has similar ideas, they can opt for this tattoo made for the forearm.

The crossed arrow tattoo represents a restriction or a warning to not enter a place. Basically, it is kind of a warning or a death threat. This tattoo is made on the forearm and is a beautiful piece of art. This can be altered according to one’s wish by adding colors to the tattoo making it fall under colorful tattoos. They can also add a feather and make it a feather arrow tattoo which would add uniqueness to these crossed arrow tattoos.

This tattoo has a positive vibe and looks like it will remove all the evil forces from the surrounding. This tattoo is beautifully made and is a unisexual tattoo. It looks more like a cupid’s arrow and it would look nicer if angel wings are added to the arrow. This could also be made as a matching ink with your best friend or loved ones.

This tattoo can be made anywhere on the shoulder, spine, or even on the leg. All these places would look perfect. The minute details on the arrow tattoo show the love of the artist for his work and the dedication he has for his work. The small tattoo of the flowers makes that arrow tattoo look more adorable and more attractive. This arrow is going in the same direction showing that we should not get deviated from our paths.

Bow And Arrow Tattoo Men With The Eagle

This tattoo is beautifully made by the artist. The tattoo has a different meaning which says or shows a comparison between the eagle and the arrow. It looks as if the arrow is determined to move ahead and reach its destination just the way an eagle hovers around the sky and when it finds its prey it heads straight towards its prey without getting distracted.

Such tattoos are perfect to be made anywhere on the body, particularly in places with larger and broader spaces. It can be altered by adding colors and even making it into two crossed arrows and the eagle turn into angel wings. This tattoo gives personal beliefs a motivation to move ahead in life and never to look behind.

This tattoo consists of a lot of elements- the flowers, the compass, and mainly the bow and arrow and all of these together feel as if they have a story of their own. It is either in the concept of nature or the entire concept deals with the life of humans or individuals. It shows if we waste our time and do not focus on our goals and do not move ahead in life and are stagnant the time will pass by because time is not going to wait for us.

Time can never be stagnant and if we do not move along with it then the beauty the comfort that we are getting now in our comfort zone will be over and all the beauty of life will be over. This tattoo can be made anywhere. If you want a vibrant vibe, you can even add a tint of colors to the flowers.

This arrow tattoo idea is amazing the swirling symbol around the arrow represents wind or a kind of spirit. The arrow tattoo meaning is different than it looks. It underlines the Nordic elements and culture.

This tattoo is literally a work of art. The way the compass is made with its arrows crossing each other gives us a vintage look of the entire tattoo. The crossed tattoo represents a lot. If there are two people in a proper relationship, any design with more than one arrow is assumed to represent something relationship-related. If the arrows in the tattoo design are crossed, it could depict two very different ideas: complex lovers or friendship.

A cupid arrow, on the other hand—either an arrow piercing a heart or an arrow placed on a cherub’s bow—symbolizes romance and desire, as being struck by Cupid’s arrow means you’ve fallen in love. This tattoo represents the right direction to move ahead in life and is a must choice for tattoo lovers.

This tattoo is a perfect definition of art and if someone wants to divide it into the categories of the art, then one can say that it is the part of modern art showing different signs and symbols and mostly from the geometric perspective.

The different signs and symbols may have different meanings for an individual. This tattoo is perfect who want to think out of the box and do not want to follow the usual design of the arrow tattoos that are so very common.

We couldn’t get enough of the arrow tattoos for men. So we have a few more tattoo ideas for you to think about:

What is the meaning of an arrow tattoo?

An arrow tattoo typically symbolizes direction and movement. It is also a reminder that you should never stop pursuing your goals no matter what gets in your way. An arrow can also represent protection, strength, courage and even defense against negative energy. Additionally, an arrow tattoo can be used to honor someone close to you or commemorate a special event in your life. It can also be used to express your own unique story, values, and beliefs.

What are some popular arrow tattoo designs for men?

There are many different types of arrow tattoos for men. Some popular designs include tribal arrows, Celtic arrows, abstract arrows, and silhouette arrows. Arrows can also be combined with other symbols and images such as feathers, hearts, stars, crosses, and words. Arrow tattoos can also be done in a variety of colors to add personalization and creativity to the design. Additionally, some men choose to get an arrow tattoo on a single body part while others cover larger areas of their bodies with multiple arrows.

How much does an arrow tattoo cost?

The cost of an arrow tattoo will vary depending on several factors such as the size, complexity, and colors used in the design. Generally speaking, smaller tattoos can cost around $50 to $150 while larger designs can range from $200 to $500 or more. However, it’s important to remember that prices can vary depending on the artist and the location of the tattoo parlor. Additionally, it’s important to shop around for the best deal before committing to a design.

What is the best placement for an arrow tattoo?

The best placement for an arrow tattoo will depend on personal preference. Some popular spots include the upper arm, shoulder blade, lower back and sides of the torso. However, an arrow can also be placed almost anywhere else on the body as well. It’s important to consider how visible you want your tattoo to be when deciding where to get it placed. Additionally, keep in mind that the size of the design will largely determine which body parts can accommodate it.