10 Best Arrow Tattoo Ideas You’ll Have To See To Believe! 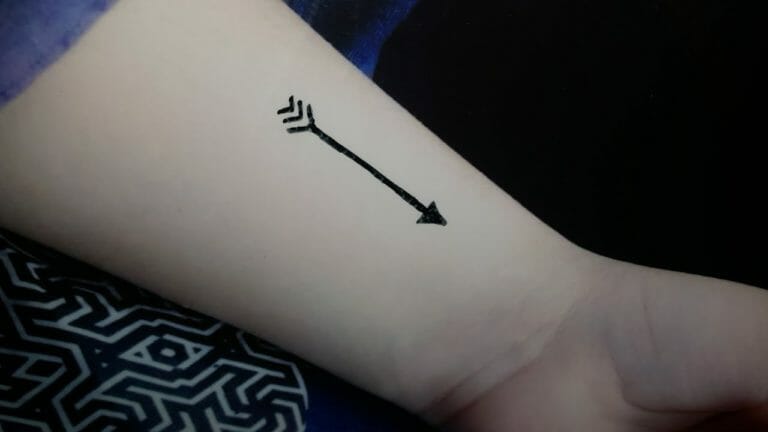 Looking for meaningful arrow tattoo designs for men and women? Read on to find out some of the coolest arrow tattoo ideas you can get inked with!

Arrow tattoos are pretty common, yet popular due to the various meanings and symbolism it holds.

One of the best things about getting an arrow tattoo is that you can combine it with other kinds of tattoos like a compass, skull, or another arrow, to make it more meaningful. The versatility of arrow tattoos is why it has become so popular among both men and women.

What Does An Arrow Tattoo Mean?

The arrow tattoo meaning has been associated with the Native American culture. Arrows are representative of strength and power, as it was used as a weapon for both hunting and fighting a war. For those belonging to the Native American culture, the symbol of an arrow or bundle of arrows were also a reflection of the protection they got from these weapons. Hence, arrows were very important to them, in ways more than one.

Over time, lots of people adopted the arrow symbol and gave it different meanings. Hence, in the most generic way, an arrow is representative of finding the right direction and moving forward to achieve one’s goal. It also stands for personal achievement and the hard work one must commit to in order to fulfil their ambitions.

Just like any other tattoo design, an arrow tattoo can also be modified in different ways to fit what you want to express. Tattoo artists create various kinds of arrow tattoos by combining different symbols that make the tattoos more meaningful and represent something valuable.

A minimalist or small arrow tattoo like this one could be your own personal reminder to move forward and in the right direction in life. If you decide to get this inked on your foot as pictured, that would further enhance what the arrow symbol represents. Even though this tattoo is quite small, it is still beautifully detailed and will look quite charming and cute.

What can be more positive than dedicating a tattoo to your family? Hence, a single arrow tattoo like this one with the word ‘family’ incorporated in the middle will not only be an amazing way of showing your love to them, but it will also remind you how they are always there with you. Additionally, considering that the arrow symbols represent protection, when you add that to the word ‘family’, it also translates to how your nearest and dearest ones protect you and vice versa. The linework in this tattoo design is quite intricate and will look really good on the arm or wrist.

Alternatively, if you want a smaller design that represents the same meaning, then you can definitely opt for this one. Even though this design is much smaller than the previous one, it is no less vibrant or eye-catching. A tattoo like this will look good anywhere on your body, including the arm as pictured. Undoubtedly, this is one the of best ways to carry the message of peace.

Bow and arrow tattoos represent a wide variety of meanings. For instance, in this tattoo, the arrow seems to be pulled back in the bow. This represents the presence of a conflict in your life and your need to be released from that. This design is quite feminine and is a great way to symbolise feminine power and energy, as well. The detailing on the flowers and the bow itself adds an aesthetic value to the overall design. This is a great tattoo idea for those who not only want to convey a message but also show their aesthetic side.

Contrary to the previous tattoo, this design can be used by men as well. The tattoo is quite beautifully shaded with black and brown ink, which adds an extra bit of charm to the final look. Here also, the arrow is pulled back in the bow, representing the same meaning. The dotted circle around the bow and arrow gives the design a much more compact finish. If you are a Sagittarian, you can also ask your tattoo artist to add elements of the Sagittarius sign, as bow and arrow is a symbol of the Sagittarius zodiac.

A realistic arrow design like this one is certainly a work of art. Ideas like this are quite uncommon and hence, if you are willing to get a prominent tattoo, you should definitely get inked with this. Here, the tattoo is depicting three crossed arrows, pointing away. The perfect use of black and white ink by the tattoo artist has brought this symbol to life. Even the rope around the arrows has been intricately inked, keeping in mind the little detailing. A tattoo like this represents strength. It will not only remind you of your personal strength but also of other important people in your life, who have added to your strength.

You can also opt for a design like this showing two crossed arrows. Two arrows that are crossed are used to represent friendship and someone who is close to you. Hence, a colourful tattoo like this one could always remind you of their presence and their value in your life. In this tattoo pictured above, the two arrows are inked quite realistically, with the perfect use of shading and coloured ink. You can get this tattoo on your arm as pictured, or even on your calf or back.

A detailed tattoo like this one, depicting the compass and arrow in a spectacular manner is rare to come by. Even though the tattoo lacks any bright colour, the shading and slight use of white ink have added a vibrance to the overall motif. The feather at the end of the arrow and on its sides at the top has further enhanced and elevated the design. Combining these two objects could mean there is a new and positive direction in your life in which you should be moving forward.

If you want a much simpler style of tattoo with an arrow and compass, then this is a fantastic option for you. The use of minimal design and a few lines has made this tattoo quite unique. Since a design like this would look good in bigger size and form, you can get this design on any part of your body that acts as a large canvas.

Given the special Native American meaning behind arrows, it would be quite fitting to get a single arrow tattoo that looks like the original Native American arrows. A typical arrow belonging to this culture had a feather on one end and a sharp tip on the other. Sometimes, a thread or string joined the two sides and that has been re-created perfectly in this tattoo, right here. You will also notice the use of dot shading and light lines on the arrow, which has further enhanced the design.

If you are in search of a smaller Native American arrow tattoo, then check out this design. Even though the arrow here is much smaller than the first one, it has still perfectly represented an authentic Native American arrow. Who knew that a weapon of war could be this beautiful to look at? You can get this inked anywhere on your body. However, a tattoo like this on your back or along your spine will certainly stand out.

Geometric tattoos are always a big hit. So, why not use this idea and turn your arrow tattoo into a work of art? As you can see in this tattoo, the arrow has been surrounded with circular patterns and dotted lines. However, this tattoo also stands out due to the intricate geometric details on the body of the arrow itself. Altogether, the patterns will combine beautifully on your body and bring out a beauty of its own.

In the world of tattoo symbolism, triangles hold a special meaning and stand for wisdom. Hence, when you combine that with an arrow, which is a sign of moving forward towards the direction of a better future, you will end up with a very powerful tattoo. This tattoo pictured above is the perfect example of a geometric tattoo that holds a deeper value. With circles, triangles, and even a spiral, the tattoo looks quite abstract and not clumsy, at all. Even though the design predominantly contains shapes, you can still easily understand it is an arrow due to the expert way in which it has been inked.

Arrows are a beautiful sign of friendship. Hence, you and your friend can choose to get a matching tattoo like this one, as a mark of your love and support for one another. Matching tattoos like this can be inked behind your arms as pictured, or even on the sides of your fingers.

You can make your matching arrow tattoos even cuter by adding a heart in the middle. You can ask your tattoo artist to add colour to the heart to make it vibrant like pictured above or even choose to keep the whole design black and white. Whatever option you choose, the essence of the tattoos won’t be diminished.

There are a lot of ways to make your arrow tattoo look fierce, but nothing might beat this design. The half face of the lion right beside a simple yet realistic arrow will undoubtedly make you the centre of attention. The expression of the lion in this tattoo is what is giving the tattoo a strong and powerful vibe. If you are a person who likes to lead a life with courage and bravery, this is the perfect tattoo choice for you. Additionally, since a lion is a predator that hunts, adding a lion next to an arrow further amplifies the meaning of an arrow, which was also used for hunting. Such designs are rare to come by, so you certainly shouldn’t miss out on this one.

The spine is quite the ideal place for an arrow tattoo because it matches well with the shape of an arrow. Hence, you can get an elaborate spine tattoo like this one with beautiful detailing, linework, and a lotus in the middle. Even though the tattoo has been done using only black ink, the size and form of the tattoo have given it a life of its own.

If you are not ready to commit to a design that elaborate, this is the perfect alternative for you. The design remains the same, but this one is much more compact and the arrow is pointing upwards. This is more of an outline tattoo with some dot-work to give it a refined appearance.

Now that you know the various kinds of arrow tattoo designs, you can surely get an idea about which option will suit you best. The beauty of arrow tattoos lies in the fact that they can be combined with different elements or designs to give them a different meaning. Symbols like this allow tattoo artists to experiment and come up with lots of different designs related to your life and preferences.

While in ancient times, an arrow was a weapon of war and also used for protection, nowadays, people have depicted their arrow tattoos in a way to symbolise peace, positivity, moving towards a better direction, and end of a conflict. Arrows are also symbols of friendship. Hence, depending on how you depict your arrow tattoo, the meaning will change and fit your idea of what it should be.