10 Best Arrow Finger Tattoo Ideas That Will Blow Your Mind! 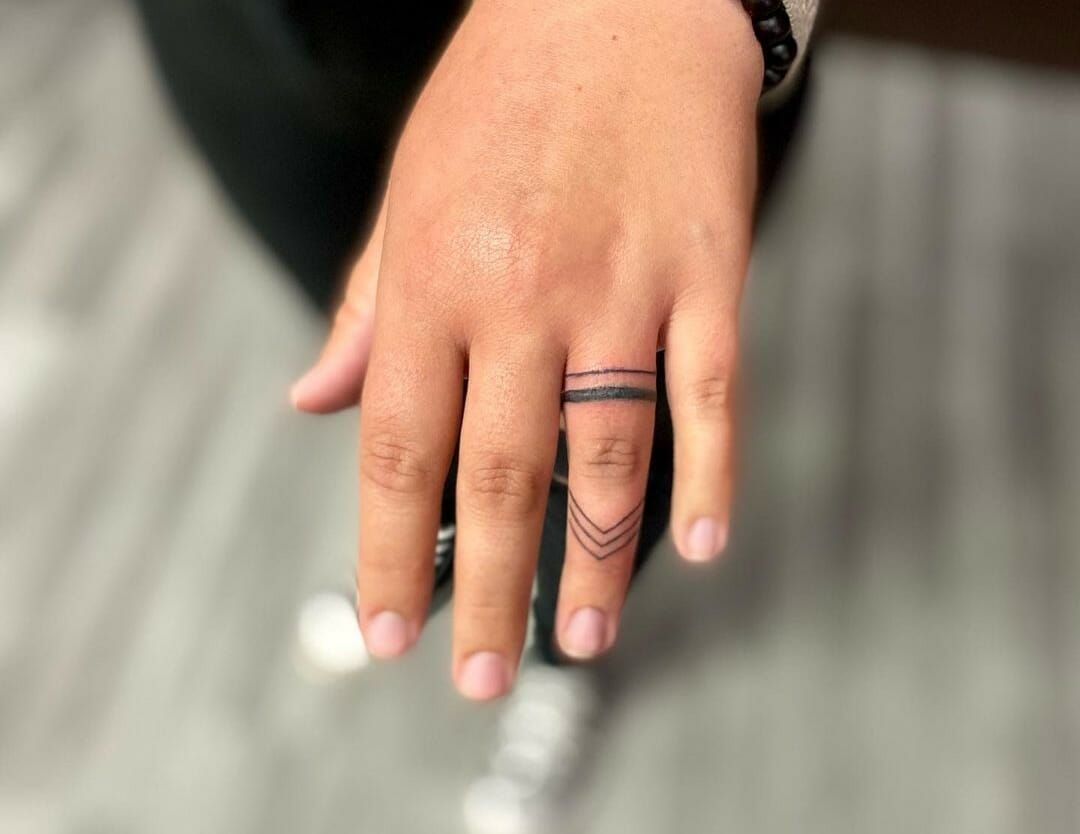 Are you looking to pierce your fingers with artistic designs of Arrows? Fret not. We have got you covered with these tattoos.

An arrow tattoo symbolizes the power in hunting as well as a formidable weapon in battle in Native American culture. Native Americans valued the arrow mark because they were zealous about defending their homes, communities, and tribes against invasion, and their weapon of choice for protection was a bow and arrow.

So, what does arrow tattoo on finger mean? Well, in the current generation, an arrow symbol holds profound meaning for different wearers. For some, it represents strength, for others it′s a symbol of the direction in finding their path in life. They are also a reflection of individual success and the struggle required to attain it.

There are a variety of arrow tattoo designs that represent different things to different wearers and are customized in different ways. However, the symbol of an arrow is always consistent. Several other designs are incorporated in an arrow to fulfil the customization of a tattoo, including a crescent moon, cross, the names of your other half, floral designs, hearts and many more.

Each unique tattoo design has its own special meaning and you can find your perfect tattoo as you take your pick from this curated list of arrow finger tattoos. Read on to find your favourite choice.

In all likelihood, this is one of the simplest of finger tattoo ideas, especially for an arrow design.

While some prefer to have even an infinity tattoo incorporated into their arrow designs, others prefer something as minimal and simple as such tattoos.

This small tattoo might be effortless and pretty self-explanatory, but it holds a deep meaning. Though it is placed in the middle finger, a finger placement isn′t the only place for the tattoo to get tattooed. It can be placed on your forearm, wrists or even behind your ears and your neck or your collarbone.

However, the middle finger is also an ideal placement for such a beautiful tattoo.

If you are someone who appreciates uncomplicated and minimal tattoos with profound meanings then this tattoo will definitely suit your taste for a finger tattoo.

Tattoos on a ring finger are always a good idea. It can be any tattoo design, even rings that reflect a commitment to your other half.

Usually, chevron arrows are followed up by one another, pointing upward or forward and therefore are symbolically valued. This simple Fineline work might not be too complicated or intricately elegant, but it does hold a deeper meaning.

They signify your life′s path and the significance of going ahead rather than backward. Moving forward, rather than looking backwards.

So, if you are looking for something as easily done and deeply meaningful as the single chevron arrow tattoo, then you should definitely opt for this finger tattoo design.

A small arrow tattoo on finger or a small design of an arrow as such is a popular choice among the tattoo community.

The allure of these little motifs is also that they accommodate themselves easily to a variety of positioning possibilities. If you choose, you can get a tattoo behind your ear or on your finger.

Plus, minimal ink isn′t as time-consuming as large, intricate designs, and many individuals find it to be an excellent beginning to body art.

In this piece, the tattoo artist uses black ink on one finger to tattoo the tiny arrow, simple and cute. As we have figured, most finger tattoos are ideal and perfect when they are small and symbolic of something special.

So, if you are looking for something similar then make sure to stick to this cute and cool tattoo design.

Arrows are a basic and attractive alternative for both men and women′s finger tattoos. Many individuals believe that an arrow tattoo represents keeping loyal to yourself and your ambitions.

As a result, these tattoos not only have a positive and motivational message, but they also precisely match the contour of your finger.

Side finger tattoos are ideal for those who like dainty and cute designs and an arrow design is just that.

In this small piece, the tattoo artist created a simple tattoo design with black ink but they incorporated an extra design by drawing a curled red and white line through the arrow′s stick. It spices up an otherwise basic design.

While side finger tattoo designs are preferred by most people, this style also has some setbacks.

The skin on the side of our fingers are delicate and thin and has several nerve endings. Thus, getting inked there could mean some discomfort. Other than that, fingers are often exposed to more use than other places and so, finger tattoos fade easily.

Dots are popular choices for tattooing.

Creating different patterns with dots is a unique way to get inked and many tattoo artists will suggest such simple and easy designs for first-timers. Not only are they painless but they also hold deeper meanings.

The chevron sign is made up of two upward-pointing arrows, one above the other. There can be up to four arrows in a row, although not all chevron emblems have the same amount of arrows. The chevron insignia is one of the most well-known marks in heraldry. In most situations, this sign and its number of arrows reflect the rank of a specific member of the military or other armed services. Each arrow is referred to as a chevron.

In this very tiny piece, the artist has drawn a single chevron arrow with dots on the edge of the pinky finger. It is ideal for those who are getting a tattoo for the first time and are probably terrified of the pain. It will be a quick job and before you know it, you′ll be the proud wearer of a dotted single chevron tattoo.

Speaking of Chevron Tattoo designs, a double chevron is also a popular choice among men and women who like simple designs for their finger tattoos.

The Chevron was so popular in Greek society that it was even engraved on pottery for ornamental purposes. Others took it more sincerely and engraved the emblem on the Greek Spartan warriors′ weapons, most prominently on the front of their shields.

Because the Greek Spartans were famed for doing so, the insignia spread and is presently a part of the world′s armed forces culture.

Therefore, simple Chevron Tattoos done in dots can be ideal for military personnel. However, people who like dainty designs all get this design tattooed and so can you. It makes for a great alternative to intricate arrow tattoos with the same meaning.

Such unique tattoo ideas are often a massive hit among tattoo enthusiasts. Using an arrow to create a ring on your finger is probably a cool style for you to mark the permanence of your commitment to your special person, instead of using a real ring.

The beauty behind this ink is that it not only holds a deeper meaning but also commemorates one′s love and devotion through a simple yet distinct gesture.

If you are looking to surprise someone with such a cute and romantic gesture, then this arrow ring design is just for you. We can assure you, your loved one will surely be charmed and delighted.

Despite their intrinsic appeal, arrow tattoos exist in so many various shapes and varieties that you can make them all your own. They are indeed very popular among women, and they make fantastic choices for couples or best mates.

In this small piece of art, the artist created a triple chevron arrow in Fineline work. One of the easiest and least time-consuming designs available for those who are looking to get matching tattoos with your partner or your best friends.

Such beauty is sure to grab attention and fetch you and your partner compliments.

We have established strongly that the chevron shape of an arrow is massively popular among the tattoo peers.

They are also popular motifs in Native American tattoo designs and are very valuable symbolically. In the Native American culture, arrows are symbols of warriors, they are said to ward off negative energy, and strength.

In this tiny piece, along with other Maori tattoo designs, this double-sided chevron tattoo points in both directions and is a representation of the forward and upward movement of life.

It is ideal for filling different positions on your finger with other motifs alongside the chevrons to enhance the look.

Last but not least, another geometric design of an arrow for the thumb finger is sure to catch your eyes. It might look similar to the chevron pattern but it isn′t the same pattern. While chevrons are less wide, this geometric pattern is large and wide.

It is done with simple line work and highlights the contours of the thumb, making it a popular choice among men. You can never go wrong with choosing such simple arrow tattoo designs seeing as they aren′t as intricate as other finger tattoos, but at the same time, they are meaningful.

With that, our collection of arrow tattoo ideas have come to an end. However, we will suggest that you seek out an experienced artist to get your finger inked. Plus, finger tattoos tend to fade early because our hands and fingers are used more often than any other body part. Thus, you will probably have to get them retouched every few years or so. Fortunately for us, finger tattoos cost lesser than a regular tattoo and your wallets will not skip the dent.

We have another small curated list of arrow tattoo ideas that will surely help you find your pick: