10 Best Armenian Cross Tattoo Ideas That Will Blow Your Mind! 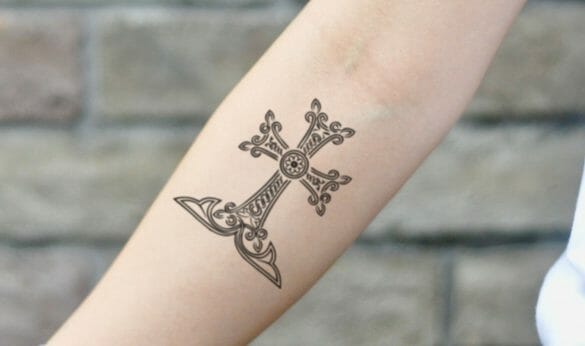 Are you a fan of intricate cross designs and are looking for an aesthetic Armenian cross tattoo design? You’ve come to the right place.

Armenian tattoos are the most intricate cross tattoo designs.

An Armenian Cross tattoo is a symbol of salvation. You can be from Armenia, or even be a Christian to boast this magnificent tattoo.

In history, Armenian cross tattoo designs didn’t have too many intricate designs. However in contemporary times, various spiritual symbols and images are used in these tattoo designs.

This tattoo is known as a ‘Khachkar’ which is a stone carved with an Armenian cross. Not only has the tattoo artist used intricate detailings in the tattoo but also made it appear crippling and old. The length of the cross fits perfectly on the forearm place.

The Armenian Cross Of Protection

This Armenian tattoo is a large chest-piece tattoo that symbolises hope. The details and shadings of this tattoo are remarkable and would look best on well-formed chest muscles.

The Armenian Symbol Of Hope

This tattoo is a symbol of love and hope. In this tattoo, the tattoo artist has drawn the Armenian cross in detail and there is an inclusion of the names of two people. It can be customised however the tattoo bearer wants.

This appealing design used here for the Armenian Cross tattoo is brilliant. The contemporary patterns used by the artist is super cool and classy. This shadowed effect brings depth to the tattoo and the Armenian cross looks magnificent.

This modish twin Armenian Cross is pretty cool and boldly designed. The tattoo artist kept the design of the cross pretty simple which clearly makes it stand out. The monochrome colour of the tattoos engraved on the shoulders portrays the boldness of the cross.

This simple yet modern design of the Armenian Cross is really appealing. The tattoo artist has used the leaf-like in various angles at the tip of the cross and a circular design at the centre as a symbol of reversal or the circle of life. They all express a deeper understanding of the tattoo.

We all know that American Cross tattoos represent the spiritual significance of Christ, similarly, the Armenian Cross drawn here shares the significance of Jerusalem. The artist has used Celtic features and neat patterns which keeps it stylish and spectacular even though it is inked in one colour.

The boldness of the Armenian Cross tattoo not only makes it stand out but the visual appearance is magnificent. This tattoo shares the deep meaning of the cross by including the statue of Jesus along with the cross, flowers and Celtic features.

This tattoo of the American Cross has grey and black inks to engage this timeless design with a realistic alignment. The tattoo is drawn minutely with a lot of precision. This tattoo portrays the spiritual significance of the cross extensively.

The spectacular American Cross tattoo here portrays the deep symbolic representation of spiritual significance. The background of the Cross is covered with deep shade to enhance the design. On one side, the hand of Jesus is engraved and on the other, the portrait of Christ looks truly divine.

Some other Armenian cross tattoo designs that you can try are as follows: