101 Best Aphrodite Tattoo Ideas You’ll Have To See To Believe! 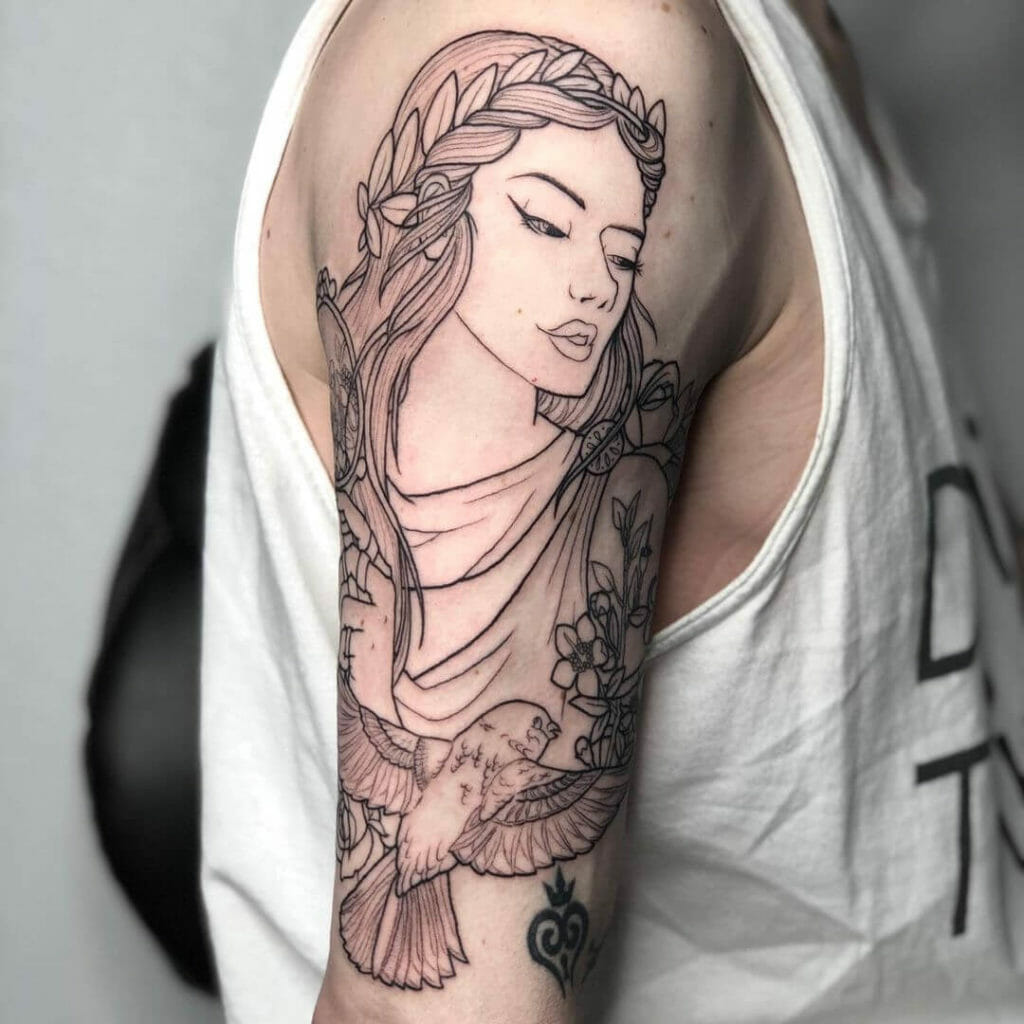 If you love Greek mythology and want to get tattoos, then you might want to get a stunning Aphrodite tattoo.

Out of all the Greek goddesses, Aphrodite is probably the most well-known goddess who is associated with some of the most interesting stories in Greek mythology including the Trojan war. Also known as Venus in Roman Mythology, she is thought to be the daughter of Zeus and Dione.

An Aphrodite tattoo can mean a lot of things depending upon your interpretation of her and her powers. As the Greek goddess of love, beauty, and fertility, she has a number of symbols which represent her such as roses, seashells, and doves.

Aphrodite was the goddess of beauty and love but her vanity was also her primary weakness. She would curse anyone whom she thought was more beautiful than her. One of the most famous stories of Aphrodite’s curse is the one she bestowed upon Eos who loved another Greek God Ares. Due to Aphrodite’s curse, she could never find true love even though she searched for it all her life. Even though Zeus had gotten his daughter married to Hephaestus, Aphrodite also consorted with Poseidon, Ares, and Hermes.

Unlike Athena who was considered to be the Goddess of knowledge and wisdom, Aphrodite or Venus was known for her beautiful face and body. As a result, many sculptors and painters have tried to capture her beauty in different works of art throughout the years. Many young women prefer to get a simple tattoo of Aphrodite’s face as depicted in various forms of art to pay their respects and admiration for the goddess Aphrodite.

While most Greek gods and goddesses like Zeus, Ares, Poseidon, and Athena kept fighting among themselves for power and kept waging war, Goddess Aphrodite was a free soul who believed in love and passion. Women across ancient Greece prayed to her for the healthy birth of their children.

Adding colors to your Aphrodite tattoo would grant it life and make it more captivating to look at. As seen in the picture, you can represent Venus as you like and be as creative as you like with the design.

While most of us know the Dove bird to be a popular symbol for peace, this bird is also a symbol for the goddess Aphrodite. Therefore, if you are a novice or want to get a tattoo done for the first time, you may want to search for some simple tattoos with Aphrodite’s symbols rather than a tattoo of her face.

A dove tattoo design would look beautiful and can even be modified to look as complex as you want. You can also allow your tattoo artist to have the free hand and add some shading to make the tattoo a piece of art.

If you are looking for an Aphrodite symbol tattoo that will be one of a kind, you may also get a sparrow tattoo. A tiny but intricate sparrow design would be a great piece to get done if this is your first time getting a tattoo.

Tattoos Of Dainty Pearls To Represent The Goddess Of Love

While pearls are already much used as a tattoo design, they are also a symbol of Aphrodite. Therefore, getting a tattoo of a dainty string of pearls would also be a good way to pay homage to this Greek deity.

While many get tattoos of the nude body or face of Aphrodite, some people prefer to symbolize this Greek god through rose tattoos.

While red was the color most associated with Aphrodite in Greek mythology, for your own unique twist on the tattoo – you can also see these amazing Yellow Rose Tattoo ideas! You can also search for Pinterest Aphrodite tattoo for more ideas about Greek tattoos.

Tattoos Of Sea Shells To Show The Birth of Aphrodite

According to a popular story, many believed that Venus or Aphrodite was born out of sea foam which is why seashells are also considered to represent the goddess. This is also the story that the painting ‘Birth of Venus’ made by Botticelli is inspired by where a nude Aphrodite is seen to rise from a sea shell. Consequently, if you are looking for ideas to portray Aphrodite in an unconventional way, you can get a sea shell tattoo made on the sleeve of your arm for a unique tattoo.

Mirror Tattoos As A Metaphor For Beauty

A mirror also represents Aphrodite due to its deeper meaning of elegance, grace, and vanity. You can tattoo a simple mirror with an ornate frame as seen in the picture or even add a hand to symbolize beauty and self-love.

The pomegranate fruit is more widely associated with the story of Hades, the brother of Zeus and the Greek god of the Underworld, and his wife Persephone. However, this fruit is also a symbol of Aphrodite because of its meaning related to birth and procreation. For a truly distinct Aphrodite goddess tattoo, you can look get a vibrant red pomegranate tattoo.